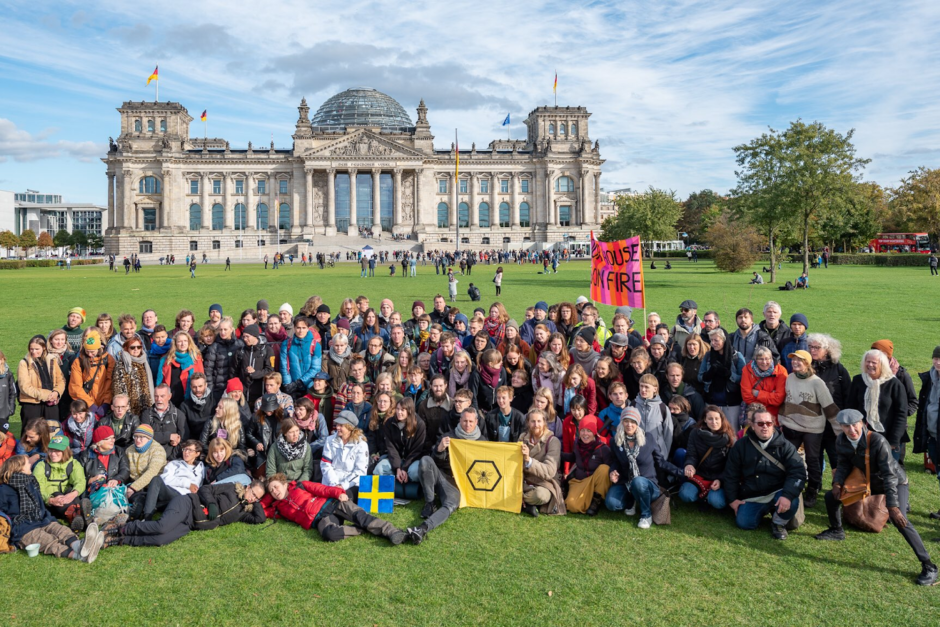 XR Sweden: “Most of us are now heading home to Sweden from #BerlinBlockieren. Thanks to @XRBerlin @ExtinctionR_DE @XR_Aufstand and everyone else for an inspirational and well-organised week of actions! We are unstoppable — another world is possible.”

until @ExtinctionR demands are met everywhere

Sunday. “We were in front of the 16th Biennial which is sponsored by the oil companies to protest against greenwashing ?? With the power of the silence of death that comes after the thump of drums, we once again shout: Get rid of fossil fuels!”

Salt Lake City. Sunday.. Utah’s birds are drowning in #FossilFuels! It’s time for the state and local governments to declare a #ClimateEmergency.

Chapel Hill, North Carolina. Sunday. “Supermarkets throw 43,000,000,000 pounds of food away every year. The best thing to do would be to give it to hungry people; the very least you can do is compost it.”

Artistic expression to raise awareness to the public about XR

Dear Jacinda, this is an emergency

You famously said climate change was this generation’s nuclear-free moment. But when Extinction Rebellion uses the tactics of the Nuclear Free movement, you say you aren’t impressed.

We are a fire alarm, and fire alarms are disruptive. When our house is on fire, and we’re asleep, a noisy alarm is what’s needed. Our house is already on fire. Scientists agree we are in the middle of a mass extinction driven by human-led climate and environmental breakdown.

We aren’t comfortable being the alarm. Before this emergency, many of us would never have considered even joining a protest. We are Tangata Whenua, lawyers, parents and grandparents, retail workers, church ministers, scientists, mental health advocates, business owners and others. And yes, some of us are activists who love to sing. We would prefer to be going about our daily lives, spending time with our families and enjoying ourselves.

But, this is an emergency.

We acknowledge your Government for doing more on climate change than the previous one. We celebrate the end of future oil exploration permits as a world first. We understand the “political reality”, but the science is clear that it isn’t enough.

We already have enough oil to push us beyond 1.5 degrees of warming – the limit agreed upon by the Pacific and United Nations to prevent a human catastrophe and collapse of ecosystems. Despite this, OMV (one of the 100 climate criminals responsible for 70% of global emissions) will soon explore for oil in pristine, untouched waters near Otago and Taranaki. The Austrian oil giant could only do this because MBIE extended OMV’s existing permits. MBIE could only extend their licenses because your Government allowed it.

The United Kingdom was the first country to declare a climate and ecological emergency. The British Parliament credited the declaration to Extinction Rebellion UK’s non-violent disruptions in April. In Aotearoa, we have our own proud tradition of strategic non-violence. Without it, the suffragettes wouldn’t have won women the right to vote.

We commend the Labour-led Government for acknowledging the school strikers, while National and Act parties derided them. But this isn’t enough. On Monday, you asked the media why anyone would support our disruptive actions when thousands of students had just protested in the street. Like many New Zealanders, seeing waves of young people marching for climate justice gave us hope. But for us it isn’t an either/or. We support and marched with the school strikes. Yet your Government’s failure to put in place the school strikers’ demands is precisely why we back mass symbolic action and civil disobedience. We need more than lip service. As Greta Thunberg says: “We don’t need you to congratulate us, we need you to act.”

1.    Tell the truth and declare a climate and ecological emergency;

2.    Act now and halt biodiversity loss and reduce greenhouse emissions to net zero by 2025 and

3.    Go beyond politics and setup a citizen’s assembly on climate and ecological justice.

We are consulting members to develop a fourth demand acknowledging Tino Rangatiratanga and climate justice.

While Extinction Rebellion is a fire alarm, we can’t be the escape plan. The citizens’ assembly we suggest will bring people with a range of expertise together to learn, deliberate and make recommendations to act. Similar to jury service, members are randomly selected from the population and quotas are used to ensure the assembly is representative. Assembly members hear balanced information from experts and stakeholders and work in facilitated groups to develop a recommendation. They are run by an independent body and are transparent, inclusive and effective. It was a Citizens’ Assembly that international media outlet DW says “broke decades of political deadlock in Ireland to usher in legal abortions and same-sex marriage”.

It’s time to draw the line.

On Monday you told media you drew the line on illegal and violent action. Your use of our campaign slogan “Draw the Line” to spread a mistruth is unfortunate. Extinction Rebellion is committed to strategic non-violence and is inspired by Parihaka and the Nuclear Free movements. Police Inspector Wade Jennins told Stuff on Monday that we “were peaceful, did not damage anything or threaten anyone.” He noted that we thanked the Police for how they acted. No one was charged with an offence.

We will take whatever non-violent action is necessary to protect our future. Monday was just the beginning and we are willing to suffer the consequences of further action. Sometimes you have to get burnt to pull someone out of a fire. But it’s worth it.

Because this is an emergency.

Either we make history or we’re history. Like the Nuclear Free movement before us, we choose to make history.

Today the rebellion in Indonesia had a 4 KM march in Jakarta at the biggest protocol road in the capital city of Indonesia.

On Saturday, XR Sri Lanka co-hosted its first ever beach-cleanup strike at the Dehiwala beach in Colombo. More than 40 volunteers attended the event and collected over 50 bags of waste from just a 250-meter stretch. Local children also joined the action. All the collected waste was separated and sent to be recycled. Only the Styrofoam will be given pack to their manufacturers.

Rebels also staged a die-in at the beach to raise awareness on the devastating effects of ocean pollution and the climate emergency. Sri Lanka has been placed second in the Global Climate Risk Index. This reminds us that those that contributed least to the climate emergency are the ones who suffer the most. More actions are planned in Sri Lanka.

“Extinction Rebellion Sri Lanka co-hosted its first ever beach-cleanup strike on the 12th October at the Dehiwala beach [Colombo] along with Chibby’s Friends & House of Hope, Climate Action

More than 40 volunteers attended the event and collected over 50 bags of waste from 250-meter-long stretch of the beach. The waste was then segregated into, glass, hard and soft plastic, PET bottles, glass, rubber, Styrofoam.

Some local children also joined in with the collection and was given ice cream as a reward for their effort. All the collected waste will be recycled by Flipyarn whilst the Styrofoam will be given back to their manufacturers.

XR Sri Lanka also held a die-in at the beach, where volunteers acted as if dead on the ground, to spread awareness on the devastating effects of ocean pollution as well as the climate emergency.

The amazing Margaret Atwood in London this morning being interviewed by the XR podcast team!

Fake News! At the Royal Exchange.

Hands of hope” A family of 4 hold hands in the centre of the London banking district, home of climate criminals. The parents from Devon home school their children & believe this is the best education for children today all over the world

“XR is targeting BlackRock because it’s the world’s biggest backer of climate and rainforest destruction. It’s the #1 investor in fossil fuels, including coal, and in the companies driving deforestation around the world. XR calls on BlackRock to disinvest from these sectors now and back renewables.”

The arrest of Rabbi Jeffrey Newman

“It’s impossible, at least for me, to read the Bible of Prophets without recognizing how much we’re rooted in the Earth, in social justice, in an awareness of the world around us, and, attempting to give all that we have on its behalf seems to me the highest calling towards God. The highest principle is the saving of life, pikuach nefesh, there isn’t anything more that we’re doing here in Extinction Rebellion than being aware that millions, or hundreds of millions of people, already are at threat because of the changing climate, and if you add in future generations then….this is where we have to be. We have to work alongside those who are absolutely dedicated to trying to save life.”

He was arrested moments later.