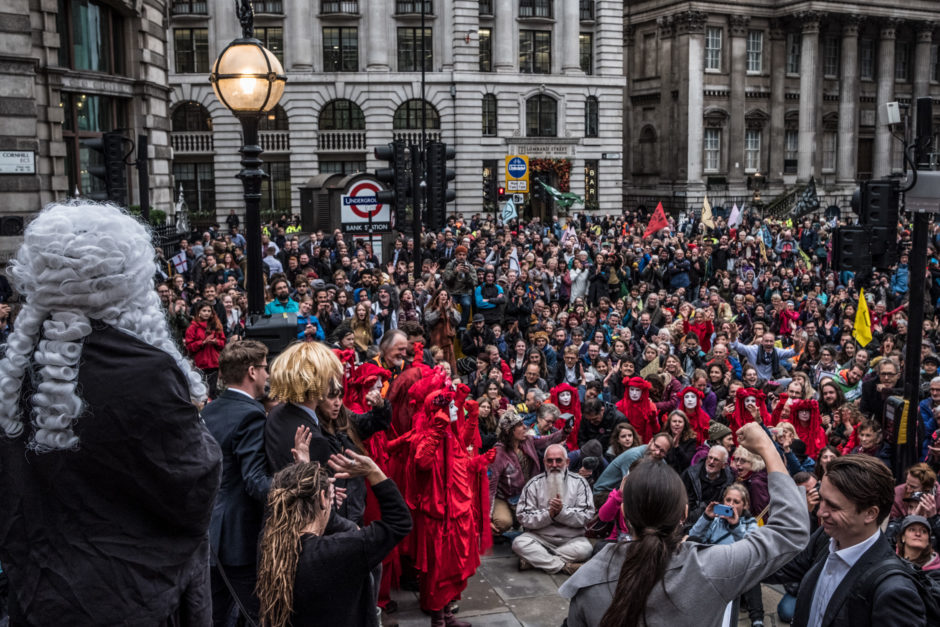 Tomorrow: The Rebellion Strikes Back

As the second week of the International Rebellion continues, the call for action on the Climate and Ecological Emergency rings out around the world. In London, the blanket ban on Extinction Rebellion protests by the Metropolitan Police has been called chilling and unlawful.[1]

These questionable new conditions attempt to outlaw Extinction Rebellion protests from taking place in London. As it stands, under this new police order, any two supporters of Extinction Rebellion standing together anywhere within the M25 will be against the law. Last night, the police cleared people and all tents, gazebos and other infrastructure from the ‘designated protest site’ of Trafalgar Square, and have continued to do so today at Vauxhall by Pleasure Gardens.

This move by the Met is an unprecedented attempt to curtail peaceful protest. In response to this, we have taken the first steps towards a judicial review – our lawyers have delivered a ‘Letter before Action’ to the Met and asked for an immediate response.

This erosion of democracy is an assault on our fundamental right to protest and we call on all members of the public to join us tomorrow at 1.30pm for an Emergency People’s Assembly in Trafalgar Square (see below for further detail). It is during these moments that we must seek strength through coming together.

On the morning of the Assembly, Extinction Rebellion will publish letters to all Government Departments demanding they produce their plans for a Climate and Ecological Emergency. This follows almost two weeks of blockades at key Government departments.

10am Extinction Rebellion in High Court

Tomorrow morning at 10am lawyers for Extinction Rebellion will submit an application for judicial review to the High Court for an urgent hearing later in the day. A group of claimants Baroness Jenny Jones, Caroline Lucas MP, Clive Lewis MP, David Drew MP, Ellie Chowns MEP, George Monbiot, and Adam Allnut will bring an action on behalf of Extinction Rebellion to challenge the police’s blanket ban on Extinction Rebellion protests across the whole of London for the rest of the week.

The ban is a disproportionate and unprecedented curtailment of the right to free speech and free assembly, and is being challenged with advice by Bindman’s Solicitors and Doughty Street Chambers. Extinction Rebellion hopes that the High Court will quash the decision to implement the blanket ban tomorrow, stopping the criminalisation of protest against the climate and ecological emergency.

The legality of the ban is being called into question, with Labour calling the ban “an attack on civil liberties”.

At 12:30pm Mothers and babies will ask Google (6 Pancras Rd, Kings Cross, London N1C 4AG) to stop funding climate deniers and tell the truth about the climate crisis. XR Youth will be visiting Google owned YouTube at the same time. Google it’s time for you follow your motto and ‘do the right thing’.

1.30pm – Coming Together – An Emergency People’s Assembly on Trafalgar Square

From 1.30pm tomorrow (Wednesday), Extinction Rebellion will hold an Emergency People’s Assembly in Trafalgar Square. The assembly will ask: “How do we respond to the silence of the Government on Climate & Ecological Emergency in the face of the attempt to silence people, with a London wide ban on our peaceful assembly?”

Londoners are being asked to make a walking pilgrimage from their homes, live streaming their return to the heart of their two week rebellion.

The call to assemble comes in response to the controversial London wide ban on Extinction Rebellion peaceful assemblies. Politicians from all backgrounds have been invited to attend and protect the democratic right to peaceful protest. The People’s Assembly will discuss how to respond to the shocking silence of the Government on Climate & Ecological Emergency in the Queen’s Speech on Monday – the speech contained just six words on the issue.

Julian Thompson of Extinction Rebellion said: “This is a call to all people who want to protect our environment and our basic human right to protest. We have been on the streets to demand that the Government produces a plan to deal with the Climate and Ecological Emergency.

“The Government’s silence is deafening; with no mention of it in the Queen’s Speech, which is their programme for Government for the year. At a time when it’s more important than ever to peacefully assemble and protest on these emergencies, we are now at risk of being silenced by the authorities. This is a dangerous precedent; we need more democracy, not less.”

We will be staging a peaceful vigil outside Rupert Murdoch’s HQ at the mini-Shard (1 London Bridge Street, London, SE1 9GF), home to Dow Jones, HarperCollins Publishers and News UK, publishers of The Times, The Sunday Times and The Sun.

The vigil will extend an invitation to Rupert Murdoch and his global media corporation “News Corp” to declare a Climate and Ecological Emergency and to prioritise their editorial resources to tackling it.