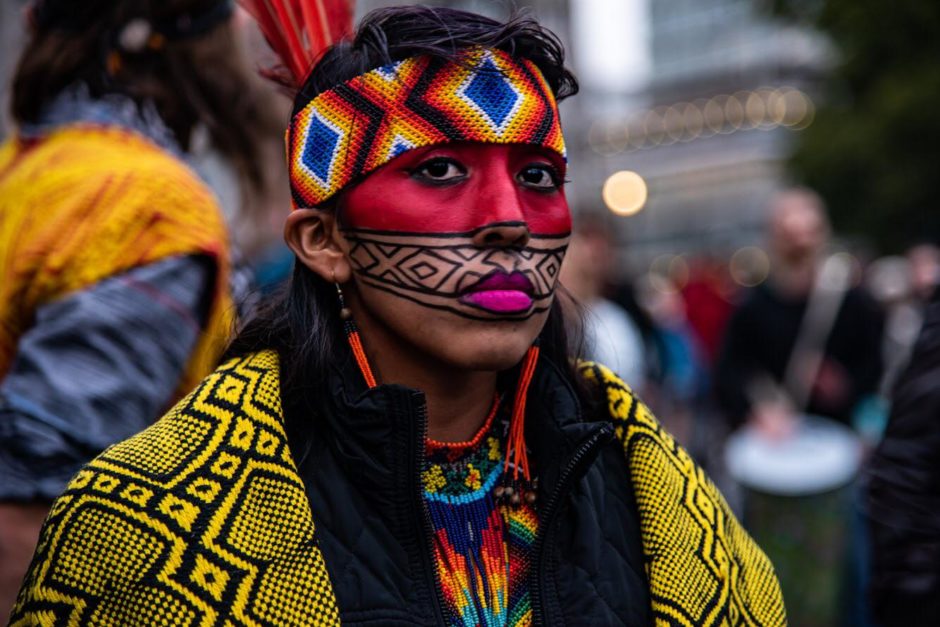 Rebel Daily 7: A fire they can’t put out

Change takes time: even at the rate we’re going – and need to be going – it’s never going to happen all at once.

But things are changing. The past week has been a moment in history: to simply list the thousands of arrests, the many tens of thousands undertaking civil disobedience, would not do it justice. We have proven to the world that this rebellion is a truly global movement, growing rapidly within and between nations, and comprised of people with the selflessness, the creativity and the courage to resist the madness of this ecocidal system.

In each country, we’re only beginning to see the political and cultural ramifications. For all the actions we report here (even these are just some of many), it’s impossible to do justice to the hard work and love that goes into them, and the creativity, joy and community which result. There is little space to convey the significance of that action, and the impact it leaves on media discourse and national dialogue.

But rest assured, every act of disobedience sends ripples, big or small.

In the broadest frame, a media monitoring service informs us that in the last week, Extinction Rebellion has featured in 53,490 media pieces with a ‘potential audience’ reach of many millions. Our message is being heard on TV, radio, print and online. And sure enough, online interest in our movement has shot through the roof.

As today’s stories show, this is not an interest contained to any single continent or country. A global crisis needs a global movement, and this is what we are becoming. At every level our actions this week have challenged mindsets, confronted systems and strengthened our movement with bonds of love and solidarity.

This International Rebellion isn’t over, but we’re already beginning to see its effects.

On Saturday, 50 rebels took to the streets of Odisha’s capital city, Bhubaneswar. A die-in was followed by a moment of silence to pay tribute to all fellow activists who have been arrested. Attendees signed a letter to the Chief Minister of the State of Odisha calling for immediate action to address the climate and ecological emergency.

At the weekend, XR Guwahati was at the ‘The Big Burp’ – the city’s first food and music festival. Their stall provided information on the ecological crisis and invited visitors to sign up for future actions. On the second day, group members took to the stage to address the crowd, accompanied by an XR video on the big screen. This fantastic opportunity was in part due to the XR group including members of local band Rain In Sahara.

XR Delhi held a mixed day of regeneration on Sunday in Central Park. They hosted an information point and ran sessions on yoga, guided meditation, eco-anxiety, and live music, before moving on to the day’s main focus: holding people’s assemblies in public spaces. To demonstrate their belief in positive action, alongside disruption they finished the day by asking people to join them in a trash clean up.

Rebels in London flooded the financial district, from Barclays to the Bank of England, with tremendous XR energy! No bank would take a risk like the one this government is taking with our lives, one rebel points out.

Some dressed as canaries and glued themselves to the Walkie Talkie Building, enacting the Irish President’s quip that ‘if we were miners we would be up to our knees in dead canaries.’ Others staged theatrics outside BlackRock, the world’s largest investor in coal mines and oil and gas companies.

Still more simply sat in the middle of the road outside the Bank of England, not least an emeritus Rabbi and lifelong environmental activist. Just before his arrest, he described Extinction Rebellion: “It is activism, but underneath it’s also about rebuilding, about showing that a society can function better when people collaborate.”

London rebels have been offered a number of ‘sanctuary’ spaces, which became especially important after a surprise visit by the police to Trafalgar Square, very late at night. Numerous rebels were arrested and the site was cleared, except for one 71-year-old Welsh farmer who valiantly glued on.

Monday evening saw the police push the boundaries of the law and remove XR’s right to protest in London. But we will not be deterred. At the end of Day 8, rebels sleep peacefully in Vauxhall Pleasure Gardens, as they wait to see what tomorrow brings. Fear not, we still have a few tricks up our sleeves.

For the London Newsletter with updates from all the sites, click this button:

London rebels, check out our Rebellion Needs page , stay up to date on the Rebellion broadcast channel, and tune into the rebel radio (+44 7367 900650).

What’s the plan? Get familiar with Rebellion week 2’s planned mass actions, and COME ON DOWN.

Monday marked the final day of the Berlin Climate Camp and the packed schedule of actions across the city finally came to an end.

Each day, the Climate Camp has featured a ‘town hall’ intended to breathe life into the third demand that climate and ecological justice be led by the decisions of a Citizen’s Assembly.

After a week of open and productive discussions from expert speakers and a good deal of debate, some of the resulting ideas were displayed outside the camp, situated opposite the Reichstag parliament building.

A lack of official comment from the German government over the past week makes it difficult to know how much they’ve been listening. In response, German rebels said that whilst their camp may be over, their work continues.

They also said a hearty farewell and thank you to all the Scandinavian rebels – Swedes, Danes, Norwegians and Finns – who are now returning to their homelands. They helped make the Berlin rebellion a resounding and multinational success.

Rebels in the sinking city of Jakarta, notorious for its intense traffic, marched four kilometres down the biggest major toll road in Indonesia’s ill-fated capital on Sunday. They demand action on the climate crisis that threatens to submerge 95% of the city by 2050.

Jakarta is sinking from land subsidence due to draining aquifers below, meaning half the city is now below sea level. Indonesia’s president Joko Widodo announced a relocation of the country’s capital city to a yet-to-be-built city on the island of Borneo, which is already suffering from massive deforestation and repeated fires ravaging its forests.

Montreal isn’t sleeping on the job in this Rebellion. About 40 rebels woke the city up to the emergency in style and slowed down traffic with a ‘pyjama swarm’. Rebels repeatedly crossed the street at a red light, and stood in the road for a few minutes with suitable (polite) signage before moving aside to let traffic through.

On Saturday, 60 rebels formed the city’s inaugural critical mass bike ride along Sherbrooke Ouest. Dressed for the occasion with XR Flags, signs and freshly-cut weeds, the cycles peacefully occupied one lane and held a space about a block long, with support from the SPVM (Montreal police) who even encouraged them to ride through the red lights!

On Sunday, in a creative twist on the standard die-in, 50 rebels took a symbolic sip of KlimAde before collapsing, a refreshing beverage ‘to COOL you down as the planet HEATS up!’, available in four flavours: Delicious Denial, Delicate Despair, Berrylicious Business as Usual, and Irresistible Inaction.

14-year-old rebel Bea explained that the event was to educate people about the psychological barriers to taking action. As appealing as they sound, all flavours unfortunately lead to extinction. This action in downtown Montreal marked the end of their week of rebellion, but rest assured more disruption is in the pipeline.

Gambia – When it rains, it pours

Earth protectors in the Gambia suffered heavy downpours before an action in capital city Banjul, yesterday, organised by local conservation organisation, Climate Save Gambia. Organisers claim not enough is being done to address the fact that “awareness about climate extremes among the people of the Gambia is too low”.

Local XR members rescued children on their way to school from the torrential onslaught, before marching through the city. Children chanted demands for climate justice, as the group called on their government to “take drastic measures to put a stop to the menace and trauma our children face daily.”

Rebels in Melbourne brought their rebellion to a close with a drown-in on Sunday, marking an “act of symbolic drowning and rising anew”. Over 500 rebels marched on land stolen from the aboriginal Wurrundjeri-willam people, to Brunswick St. in the inner suburb of Fitzroy.

The drown-in was a sombre affair, led by a funeral procession to honour earth protectors who have lost their lives in the fight for our future. Marine-themed props were also in abundance. No arrests were made and the overall mood was a celebratory end to a week-long rebellion that saw 111 rebels arrested.

On Saturday, XR Sri Lanka co-hosted its first ever beach cleanup strike at the Dehiwala beach in Colombo. More than 40 volunteers attended the event and collected over 50 bags of waste from just a 250-metre stretch. Local children also joined the action. All the collected waste was separated and sent to be recycled. All the Styrofoam will be given back to manufacturers.

They plan to host many more beach clean-ups, as well as reforestation rebellions.

Rome. Italian Rebels end their seven day fast with a meal of ashes, symbolising food scarcity on a dying planet. There were Catholic overtones of redemption and forgiveness

Salt Lake City. Utah’s birds are drowning in #FossilFuels! It’s time for the state and local governments to declare a #ClimateEmergency

London. A family of 4 hold hands in the centre of the London banking district, home of climate criminals

‘I joined XR from afar. I was living in California and doing political activism over there for the climate and also for civil rights, and the part of me that is really British was noticing stuff that was happening over here in London, and there was some kind of a sense that I was meant to be here. So I basically packed up my life of 30 years over there and moved back indefinitely, most likely permanently. Because there’s nothing more urgent.

My daily life is totally affected by knowing there’s a climate emergency going on, and to be honest, because I was living in California when Donald Trump was elected I actually made a vow that morning, that if I was to die early it would be because I was fighting on behalf of the Earth. Ever since then I’ve lived with this sort of pressure, like when you know a storm is coming.’