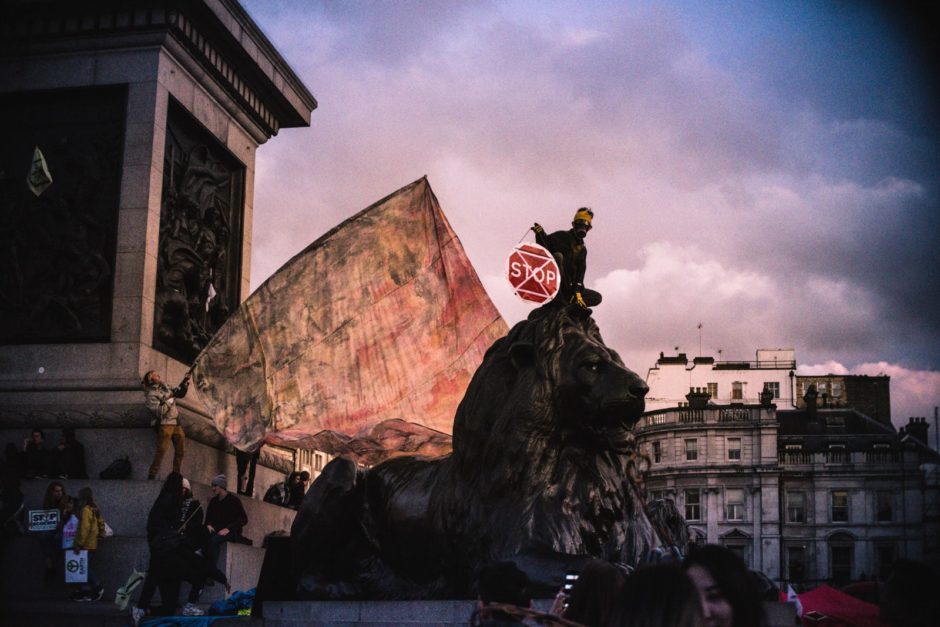 London rebels sat on a monument outside the Bank of England this morning, satirical broadsheets in hand. “Don’t panic, we’ve still got 23 trees left,” read one “don’t worry, it’s all good” read another. Yes, they were funny. But they bore grim resemblance to the message we are getting from this country’s political elite. The Queens’ speech, delivered today, which outlines the government’s priorities for the coming year, mentioned the environment only briefly, and said nothing of an emergency.

So we must continue to rebel, with our tremendous XR energy!

And today we did! Rebels flooded the financial district, from Barclays to the Bank of England. No bank would take a risk like the one this government is taking with our lives, one rebel points out.

Some dressed as canaries and glued themselves to the Walkie Talkie Building, embodying the Irish President’s quip that “if we were miners we would be up to our knees in dead canaries.”  Other staged theatrics outside BlackRock, the world’s largest investor in coal mines and oil and gas companies.

Still more simply sat in the middle of the road outside the Bank of England, not least an emeritus Rabbi and lifelong environmental activist. Just before his arrest, he described Extinction Rebellion: “it is activism, but underneath it’s also about rebuilding, about showing that a society can function better when people collaborate.”

This movement is not all about causing disruption. At its core is a will to rebuild and regenerate. In this spirit, many rebels spent the day meditating, relaxing and drinking tea in ‘sanctuary’ spaces offered to us by sympathisers.

These spaces became especially important after a surprise visit by the police to Trafalgar Square, very late at night. Numerous rebels were arrested or cleared away.

We are grateful to the providers of safe space. And to all rebels who were in London today.

Across London, despite the most challenging of circumstances – the constant threat of police action, terrible weather and unforgiving concrete – rebels are holding Peoples Assemblies.

Deliberative democracy in action. See the results of the London People’s Assemblies and join the conversation here.

Yesterday, a contingent of Love Rebels headed to Canary Wharf this morning with Barclays in their sights. The Rebels locked and glued-on, managing to shut the main entrance totally, including the revolving & sliding doors.

It was an awesome example of a decentralised action sprouting spontaneously from our Love Rebellion!

We Are All Crew

Yesterday, the UK finance sector was put on an ‘Inconvenient Trial’. We Are All Crew joined the mass distribution of the financial district to rebel against financial complicity in the climate and ecological emergency.

The financial system disrupts and destroys the lives of millions of people every day – profiting through the extraction and deforestation industries that are literally destroying our planet.

From 8am, Welsh and Bristolian rebels took part in mass swarming and road-blocks around the City of London, temporarily stopping traffic from entering the city and disrupting business as usual for some of the most exploitative companies in the world.

President of Ireland Michael D Higgins once described our treatment of the planet by saying: ‘if we were miners we would be up to our knees in dead canaries’. That is exactly how the tenants of 20 Fenchurch Street found themselves this morning.

Rebels dressed themselves as ‘canaries’ and glued themselves to each door, shutting down the famous ‘Walkie Talkie’ skyscraper in a colourful act of disruption. This action was designed to highlight the building’s resident insurance companies part in enabling the mining and burning of coal.

At 12pm, Bristol held a theatrical disruption outside BlackRock, where smartly dressed rebels dined on money, while a banner behind them read ‘when the last tree is dead, when the last fish is caught and the last river is poisoned, you will realise that you cannot eat money’. At the same time, one woman glued her hand to the door of BlackRock and another read a moving speech.

BlackRock stokes the fires that are destroying our planet. It invests in companies that use deforestation to produce beef, soy, palm oil, rubber and timber. It is also the world’s largest investor in coal mines, coal-fired utilities and oil and gas companies, and manages assets worth $6.5 trillion.

Extinction Rebellion Bristol are calling on Larry Fink (BlackRock’s Chairman and CEO) and BlackRock’s 5,000 UK based employees, its countless investors and shareholders, to wake up and smell the fires caused by its investments.

Jo, a 57-year-old grandmother who works with young people says: “I have never broken the law before but I am angry and saddened by what this company is doing with seemingly no regard for the Climate Emergency and our children’s and grandchildren’s futures. People are already dying and suffering in the global south. Our precious planet is at a ‘tipping point.’”

Performance and Writing of Letters to the Earth

A script weaving together hundreds of voices in response to the climate and ecological crisis will be read by ‘End of the F***ing World’ star Alex Lawther, actor Archie Madekwe, author of ‘Wild: An Elemental Journey’ Jay Griffiths and members of XR Youth.

Following the performance will be the opportunity to write your own Letter to the Earth. This can be a letter to or from the Earth, future or past generations, those who hold positions of power and influence, other species. The idea is open to interpretation: it could come from a personal place, be dramatic in form, be a call to action. The invitation is open to all – to think beyond the human narrative and to bear witness to the scale and horror of this crisis.

This is an opportunity to pause; to ask how this existential threat affects the way we wish to live our lives and the action we take.

Bring your own pen and paper!

Media Briefing: the Bank is Robbing the Earth!

After a quiet Sunday, Extinction Rebellion made a determined statement that the second week of protest would be as disruptive as the first.

The Evening Standard, Guardian, Daily Mail,  Telegraph, the Times and ITV all gave major coverage towards XR’s protests outside of the Bank of England, marvelling at self declared ‘Bruce Lee tactics’ that aimed to emulate the Hong Kong mantra of ‘Be Water’. Medhurst said the protests were about making the financial industry realise that ‘some of the projects it was financing were ‘essentially leading us to destruction’. According to the Telegraph, who created a good Instagrammable video, protestors blocked five roads around Bank Underground station with a chorus of chants and a banner that reads ‘Fossil Fuels Extinction’.

Other media outlets continued to focus on the individual stories of the seven days previous. The Times of Israel reported the 77-year-old Rabbi Newman who had been arrested outside Mansion House. On Good Morning Britain Piers Morgan interviewed a former Met Police officer who described XR as ‘modern day suffragettes’. Similarly, the Huffington Post ran a story about a police officer called John Curan that had been arrested for gluing his hands to the pavement outside City Airport.

Extinction Rebellion continued to be mentioned along side environmental debates demonstrating the translation of protest into climate change urgency and education. The Imperial College Committee on Climate Change urged the publishing of emissions on adverts and the banning of air miles while Boris Johnson came out in support of the Times’ campaign to reduce air pollution in line with the limit set by the World Health Organisation.

XR also found itself victim to fake news as Full Fact discovered that a photo of a diesel generator, shared thousands of times, which was supposedly in the ‘campsite of Hyde Park’ was actually a picture ‘taken at the 2011 Summer Camp music festival, in Chillicothe, Illinois’.

Internationally, a probe was launched against police in Brussels after complaints of ‘unacceptable violence’.

At about 9PM last night, the police unexpectedly moved in to evict rebels from Trafalgar Square.

We would like to remind any rebels now looking for a place to stay that our Sanctuary Spaces are welcoming all rebels: these are buildings that have been offered by local communities especially for rebels to dry off, recharge yourselves and have a restful night’s sleep.

Moving forward, these spaces will continue to be available for use for the rest of the week. Much love, strength, and gratitude to all rebels standing strong!

Watch the livestream of the eviction here.

My name is Vincent. I got involved with this because there’s something wrong with the world right now. We don’t have to go into debate whether climate change is real or what the problem is. Everyone knows there’s something wrong. I want a solution and I feel like part of the solution is definitely connection. Connecting to our community so we can talk about ideas and inspire each other to help each other out for solutions. To find knowledge and wisdom in order for us to evolve and guide us back to nature because we need to be there. I’m pretty sure society is always evolving. I’m trying to accelerate that. I came here to network with like minded individuals to accelerate the evolution of our society.

I’m a former Detective Sergeant in the Metropolitan Police. Until January this year I had never taken part in any sort of protest in my life. I read about Extinction Rebellion though, it’s commitment to non-violent civil disobedience and I immediately knew humanity finally had a chance to tackle the climate crisis.

I want to share my story because I think it’s so important not to get too sucked into a “them and us” mentality with the Police. Even when the Police are dismantling our blockades or our tents, we have to remember that there is only “us”. We are all in this together. The Police have children and unborn grandchildren and great grandchildren exactly the same as everyone else. However, they also have a duty to enforce the law.

The target of our protests should be the Government, politicians, the BBC and vested interests of all kinds.