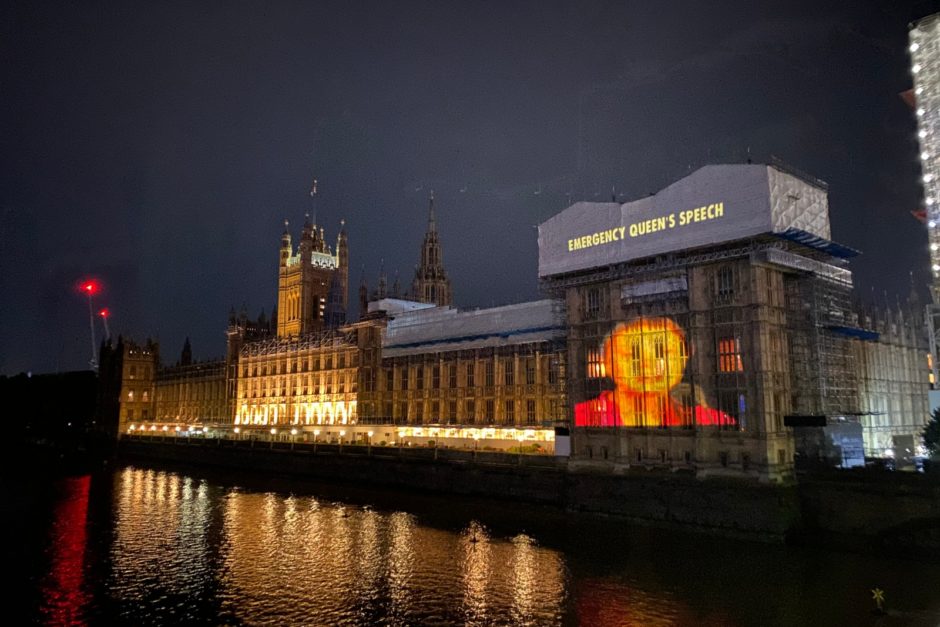 On the eve of the Queen’s Speech on Sunday 13 October, Extinction Rebellion projected a video of Greta Thunberg admonishing world leaders on to the Houses of Parliament, titled ‘The Emergency Queen’s Speech’.

In the viral speech given at the United Nations last month, a visibly angry Thunberg told world leaders: “’How dare you? You have stolen my dreams and my childhood”.

Images of five other teenage climate activists were also projected to raise awareness that it’s not just Greta Thunberg that is leading the climate emergency movement. They are Autumn Peltier (15), Artemesia Xabriaba (19), Helena Gualinga (17), Mari Copney (12) and Leah Namugerwa (15).

“It’s fitting to project Greta Thunberg on to the Houses of Parliament as it’s been six months since a climate and environmental emergency was declared and since then the Government has done nothing. The Queen’s Speech outlines the government’s objectives for the year, and these have to reflect the emergency that we’re in. We understand the environment is mentioned in one of twenty two bills. That’s not how you act in an emergency.

The symbolic contrast between sixteen year old teenager and ninety three year old woman are shows the generational gulf in understanding of this crisis”.

“Responding effectively to the climate and ecological emergency includes raising the young voices from communities who have been on the frontline of the climate struggle for generations. Voices like internationally recognised water protector Autumn Peltier, 15, who aged 13 addressed the UN General Assembly on water issues in 2018; Helen Gualinga, 17, Equadorian climate activist who speaks about the ‘existence and resistance’ of indigenous communities; and Artemesia Xabriaba, 19 an indigenous Amazonian activist who recently spoke passionately during the Global Climate Strikes.

These communities have been largely unheard in the stories of the climate crisis and we must make space for these voices to be heard and their struggles acknowledged, then acted upon.”

“The five teenage activities are fighting for communities experiencing heat waves, drought, flood. And yet Government international policies are adding fuel to the fire.

The latest action comes at the halfway point of the group’s two week Rebellion around Westminster to highlight Government inaction on the climate and ecological crisis. Over 1,300 people have been arrested in London so far.

This week, further actions are planned at Government Departments to demand they produce plans to deal with the Climate Emergency. Extinction Rebellion’s demands to each government department will culminate in an Emergency People’s Speech on Friday 18th.

The group is liaising with the police to ensure the Queen’s Speech runs smoothly and will respect Parliament and the important work that needs to be done this week.

Other actions this week include highlighting the role of finance in fueling the climate crisis and the connection between extreme weather and crop failure, which risk our food supplies. More to come.