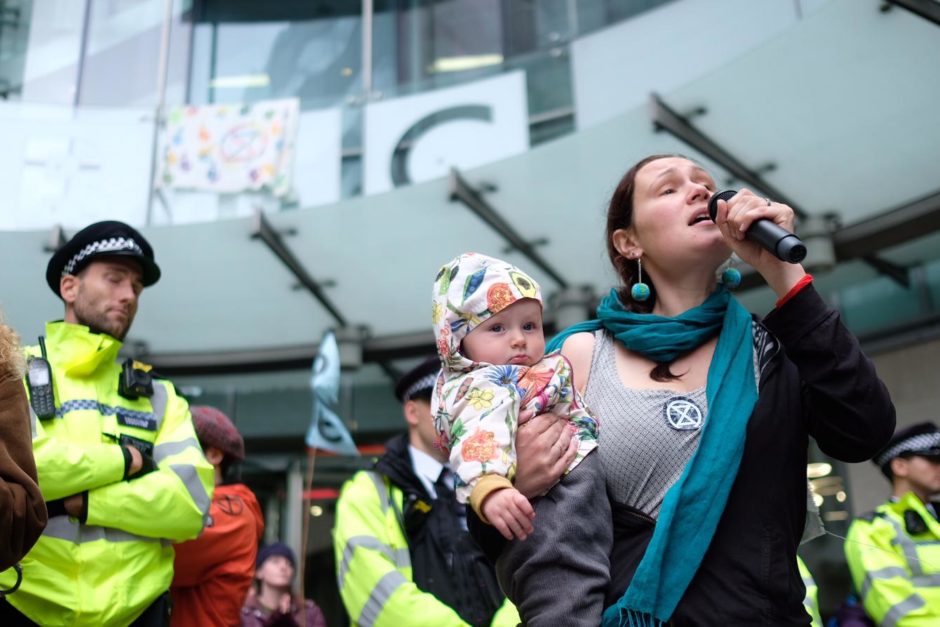 The theme for today has been ‘like water’ – we’re fluid, constantly moving, flowing and regrouping. The situation changes by the minute and new structures go up as fast as they get dismantled. In the time it has taken to write this, the roads to the South of the Charing Cross roundabout have reopened to traffic. How long for, who knows.

This morning, protesters were woken by the police and told to move tents off the roads and traffic islands or face arrest. Most people moved their tents to the pedestrian areas around Trafalgar Square but some chose to stay – including Extinction Rebellion Tower Hamlets and Interfaith member Jyoti, 75, who has been locked on since 8pm last night. “I’m a Buddhist so this is me practising. I’m treating this an extended retreat. Staying open and positive!”

The final link in a chain of bathtubs around the roundabout was removed at 10.30am this morning, and all six bathers were arrested. By 11am, the roadblocks on the South side of the roundabout had been cleared by police. But by 12.30pm, rebels were back on the previously cleared roads doing mass sit-ins – and over 500 rebels headed to Bishopsgate to swarm and block the Government Oil and Gas Fiscal Summit on Liverpool Street.

Back in Trafalgar Square, rumours that the stage would soon be taken appear unfounded; the stage is not only still there, it has been added to! A wooden tower was built in front of it, and at 1pm cofounder Gail Bradbrook delivered an impassioned rallying cry to rebels from on top as they put in the final nuts and bolts to hold it in place.

Tomorrow, the Day of Indigenous Resistance, marks the landing of Columbus in the Americas in 1492. The climate emergency is already causing death and destruction in the Global South, and tomorrow we pause to mark the genocide and enslavement of Indigenous people and imperialism that was unleashed over 500 years ago.

Bright and early tomorrow morning from 4am, Animal Rebels will begin their occupation of Billingsgate Market, the UK’s largest inland fish market. Activists will blockade the entrance to bring attention to the exploitation of fish and unsustainable fishing practices which are killing our oceans, calling on the City of London Corporation, which runs Billingsgate, to transition the market to a plastic-recycling facility to contribute to the UK’s efforts to end plastic pollution.

The animal justice group are also calling on the Government to take bold and transformative steps towards a plant-based society to restore and protect nature and will bring attention to the “animal emergency” caused by the worldwide animal agriculture and fishing industries that are a leading cause of species extinction and global greenhouse gas emissions.

Animal Rebellion accepts the need to support fishing workers to transition to the production of alternative products, and this action contributes to their calls for the government to immediately implement policies to support a change towards a plant-based food system, and work, for example, with the Vegan Society’s Grow Green Campaign, that helps farmers transition from meat and dairy to veg production.

Other disruptive pop-up actions are planned throughout the day, so stay tuned…

Tomorrow, representatives from across our movements will express their grief and their vision for the future; XR Grief Tenders, Heart Openers, XR Youth, Global Justice, XR Faith and others are set to assemble at 1.30pm at Marble Arch for a 2pm start. All are welcome, particularly rebels visiting for the weekend. If you’ve been watching the rebellion from afar, now is the time to come together and bring your family and your friends to immerse yourselves in our mass participation movement. Join the jazz-funeral band, black horses and globe, XR Skeletons Rebellion, Art Blockers and more.

The Women’s Resistance for Climate Action will start alongside the Extinction Rebellion Grief and Resistance March from St. James Park to Russell Square, but will leave the XR march to move to SOAS to join in and celebrate Indigenous People’s Day. As the primary carers everywhere, women have been leading the resistance to climate change, protecting precious land from mining, deforestation, water poisoning and cash crops: together they will create a force to make visible the unique contribution of women and communities from the Global South to the climate crisis movement.

Tomorrow, over 100 XR Doctors will protest against killer pollution – laying out 180 pairs of shoes outside parliament to mark the 180 weekly London deaths. Gathering at 12pm, they will set off around 1pm outside Shell, via St Thomas Hospital, and ending in Parliament square.

After a fantastic event yesterday, Rebel Riders will be meeting again tomorrow – meeting outside the National Gallery by Trafalgar Square terrace at 5pm

If you’re keen to ride with them, join their Telegram group here

Following the success of XR Rebellion Critical Mass ride yesterday, the Rebel Riders welcome you all to join in a group ride leaving 5pm from Trafalgar Square. All kinds of bikes, sound systems & XR flags welcome – the more the merrier!

The planned 10-minute Silence on Sunday is no longer going ahead; it will now take place on the following Sunday, 20th October, at 11am. This will be a time for us to come together again before our rebellion shifts into the next phase, reflecting on the previous fortnight and remembering and reconciling our intentions. Details to follow!

BBC: Your Silence is Deadly

On Friday morning, BBC Wales initiated the action “BBC: Your silence is deadly”. They were joined by XR groups from all over the country; XR Bristol, XR North West and XR Scotland – and XR Media Tell the Truth – to gather outside Broadcasting House and call on the BBC to meet its crucial moral duty to tell the full truth on the climate and ecological emergency.

Flags, banners, chanting and singing filled the forecourt, and rows of people sat in front of the main entrance to the BBC, where six people had glued their hands to the doors.  BBC employees could still go to work through another entrance

Over three hours of talks followed, from XR Media Tell The Truth, scientists and farmers, as well as singers, a samba band and a visit from the Red Brigade.

Whilst this took place, two protesters climbed on the porch roof of the entrance doors, which, combined with hundreds of people in the forecourt, led to a period of negotiation. The BBC was asked to meet with XR, and responded they would next week, people gathered responded they would like to see a representative today – and an impromptu People’s Assembly took place to develop a group response which was taken to the BBC.

The group response stated that they were happy to have a meeting with the BBC next week if they could meet with a senior representative today, and the commitment to the meeting is broadcast on the news tonight, along with coverage of the protest. Protesters have pledged to stay until their demands are met.

Mother & Singer Songwriter Laurie Shepherd, singing in front of the BBC holding baby Robin, 8 months old. She sings “Footsteps”, a song about the Suffragettes and how they’ve inspired many XR participants involved in the movement. Laurie plans to release an album soon in connection to nature. Photo: Maximus Richardson

“It was great to see so many people here. The BBC needs to drastically improve its science literacy, and needs to integrate the climate the environmental crisis into every story; from business and transport to extreme weather  – because the climate crisis is inherently connected to everything. It needs to dispense with false balance when they give a platform to climate deniers on an equal platform to climate scientists.”

“It’s brilliant being surrounded by strong, resilient people – but not one of us should be here.  Failure by our governments, media institutions and corporations means that we are having to spend our time demanding that they do their job of protecting us and future generations.”

“Our presence here has generated a situation of negotiation with the BBC – in light of which we have decided to hold a people’s assembly, to decide how to go forward. I feel really excited its a mixture of organisation and organic spontaneity, it’s been a peaceful and unified atmosphere. We are strong and full of respect, we just want dialogue.”

“This action is so important as the BBC have the power to reach everyone.  We need them to tell the truth, the truth is terryfying, but unless we understand the terrible state we are in, nothing will change and we will drift on.”

At 1pm on Friday, hundreds of people amassed at Trafalgar Square to witness an Emergency People’s Speech. The main speech was delivered by Gail Bradbrook, co-founder of XR, to question the lack of meaningful action taken by government departments in response to the declaration of a Climate Emergency in April.

The various XR sites have convened over the course of the week to hold site-wide people’s assemblies to review and ratify an Emergency Speech, with contributions from all sites focusing on the relevant departments they were blockading. Having passed through the site-wide assemblies, the Emergency People’s Speech was signed off at a plenary People’s Assembly yesterday, involving representative members from all of the various sites & groups.

Gail opened with a quote from the former environment secretary, Micheal Gove:

“We recognise that it is an emergency… the next generation will face the consequences if we do not take action”.

She then continued, taking aim at the different government departments for their lack of action in response to the Three Demands that Extinction Rebellion presented back in April:

The Government has only paid lip service to our demands, which are:

Supported by their Rewilded North neighbours, XR Doctors and others, XR Scotland successfully swarmed and blocked the Government Oil and Gas Fiscal Summit in Bishopsgate; a fiscal summit taking place over two days to discuss how they can develop their fiscal strategies, with no mention of climate change, net zero targets or renewables.

Starting at the Law Courts, where Red Rebels were supporting those attending the court hearings, they then moved towards St Paul’s. There were ten successful and impressively staffed swarms, with plenty of positive responses from pedestrians and drivers.

Outside the Oil and Gas conference at Andaz Hotel on Liverpool Street.

London C (The Future is Here):