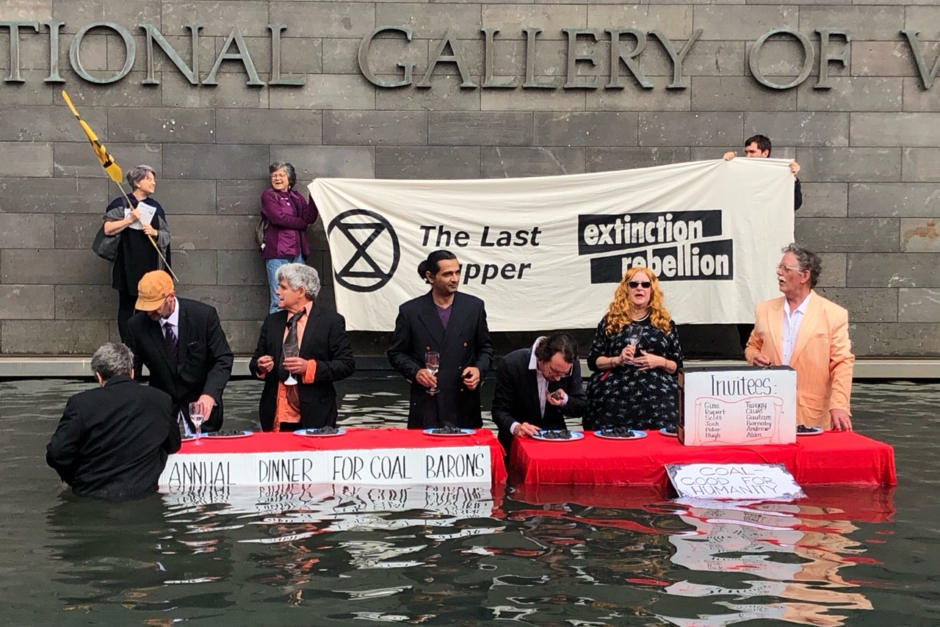 XR Unchained – Where today we bring you a photo montage bursting at the seams with inspiring rebelliousness!

So, how does it make me feel, as a 16-year-old? Being told that in my lifetime tens of millions of human lives could be lost to this crisis, and countless vital species could be sacrificed to extinction because of the inaction of our leaders? It makes me feel terrified, and angry, and I can’t understand why our governments could possibly have allowed this to happen”.

Rebels carrying on their day job in the middle of Trafalgar Square.

Dublin: outside the Coal Marketing Company offices as part of Solidarity with the Global South day.

on the Marseillaise, the French national anthem.

Berlin: Lock-Ons on the Muhlendammbrucke bridge over the River Spree

Rome: Hunger strikers at Palazzo Montecitorio, seat of Italy’s Parliament. 15 rebels are sitting in front of the building with placards but the Members of Parliament are ignoring them.

Indigenous women travelled from all regions of Argentina to invade the Ministry of the Interior in Buenos Aires, bringing their message of “BASTA al Terricidio (enough of terracide)”

“The Last Supper of the coal barons at the National Gallery in Melbourne, Australia today”.

Day three! So much cooking. And so much great planning going on. Melbourne XR has had more than 60 arrests and we’re only halfway through the week.

XR activists in India challenge revellers during Celebrations of Dussehra to join XR to fight for the declaration of a Climate Emergency.  Dussehra marks the Hindu god Rama’s victory over the demon king Ravana and the triumph of good over evil

Houses of Parliament on Tuesday night

London. Police have kettled a giant octopus on Whitehall and are marching it back to Trafalgar Square. Photo: @Liam_O_Hare

We’re laughing in the rain!

London.  The road ahead uncertain.

Mike from St Ives with the Pasty of No Return!

Lawyers for Extinction Rebellion outside the Royal Courts of Justice.  Photo: @ XRLambeth

Trafalgar Rebels: It’s beautiful to see our site not only survive but thrive! ?

Members of the clergy, including bishops, take a stand against the climate emergency by joining Extinction Rebellion protests. Today we had readings from Revelation at the Trafalgar Square site. Photo: @CClimateAction

a few who managed to take time off to join at Trafalgar Square!

John, 92, getting arrested at Downing St. just weeks after his arrest at Dover Photo: Ashutosh Joshi

This Da Vinci arch structure somehow sprung up overnight at the #LoveRebellion site. Kudos to our rebel worldbuilders! No screws or bolts used, just engineering, ‘cos we have people from all walks of life. Site holding and morale strong.

XR Writers Rebel: “Our posters & placards are ready for our event this Friday. Big thanks to Michael in Brixton.”  Photo:‏@XrRebel