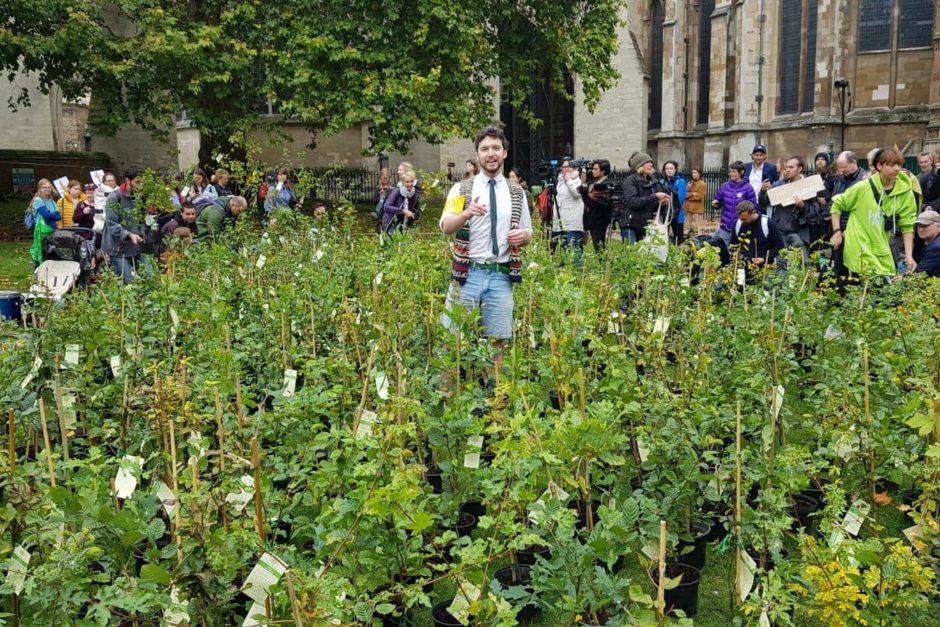 Hundreds of MPs came to a fledgling forest created by Extinction Rebellion activists on Old Palace Yard this week in support of a call for radical reforestation of the UK. MPs from all parties, including Ed Miliband, Vince Cable, Geoffrey Cox, Tim Farron and Caroline Lucas, collected a native, potted tree and promised to push for more ambitious tree-planting plans.

The action, which was calling for the UK to plant billions of trees to help tackle the climate and ecological emergency, saw crowds of volunteers carry hundreds of oak, beech, field maples and crabapple saplings to create a mini forest at the doors of parliament.

Throughout this week, people called, tweeted and emailed their MPs urging them to come down to collect their tree and confront the science. MPs from across the political spectrum engaged directly with XR rebels, many for the first time.

Government minister Zac Goldsmith MP said: “Planting & protecting trees here & overseas – on a much, much bigger scale is a critically important part of tackling the environment and climate crisis.”

MPs later took to Twitter where hundreds of pictures and supportive tweets were shared with the hashtag #ReforestEarth: the most popular hashtag used by Conservative MPs on Wednesday.

Green Party MP Caroline Lucas said: “This initiative with the trees is perfect, because what better way to reach the hearts of some MPs who are not yet perhaps as engaged as they might be. So congratulations to you for that, and for everything you’re doing outside Westminster right now – it’s really making an impact.”

Liberal Democrat MP Tom Brake was one of many to thank Extinction Rebellion for his tree and to say he supported the group’s message, adding: “I’d press our government and indeed governments globally to take the action that is needed on climate. The climate emergency is the single biggest issue that we face internationally and it requires an international, coordinated response.”

Attorney General Geoffrey Cox QC MP invited three of the organisers into the House of Commons to discuss the need for reforesting the country on a huge scale, while other MPs were overheard asking where their tree was.

Scottish National Party MP Joanna Cherry QC said: “Lovely to meet some of the Extinction Rebellion campaigners outside Westminster today and collect a sturdy oak sapling as part of #ReforestEarth.”

Conservative MP Mark Garnier said: “You can’t have enough [trees], and so I’m right behind this — I think it’s a great initiative.”

With scientists telling us we need to plant 1 trillion trees to absorb the last 10 years of global emissions, and daily news of climate breakdown and accelerating extinctions across the world, we urgently need to reforest. The UK is one of the most deforested countries in Europe, and even if it doubled tree cover would still lag behind the rest of the continent. However, it has so far committed to plant just 11 million new trees by 2022 – around a 0.5% increase.

Matthew Shribman, one of the #ReforestEarth organisers, said: “Reforesting is crucial for protecting our climate and all life on earth and politicians need to understand the scale of what we need: the government’s plan to plant 11 million trees isn’t even enough to absorb the last hour of global emissions! We need to be talking about many billions of trees.”

Trees that haven’t been picked up will be taken by Bristol-based reforesting company Rising Forests for planting in the West Country, and all pots will be reused.

Photos, video and MP tweets available here. One is a video of Sir David Amess promising to ensure that the actio the science More MP quotes are available on request.