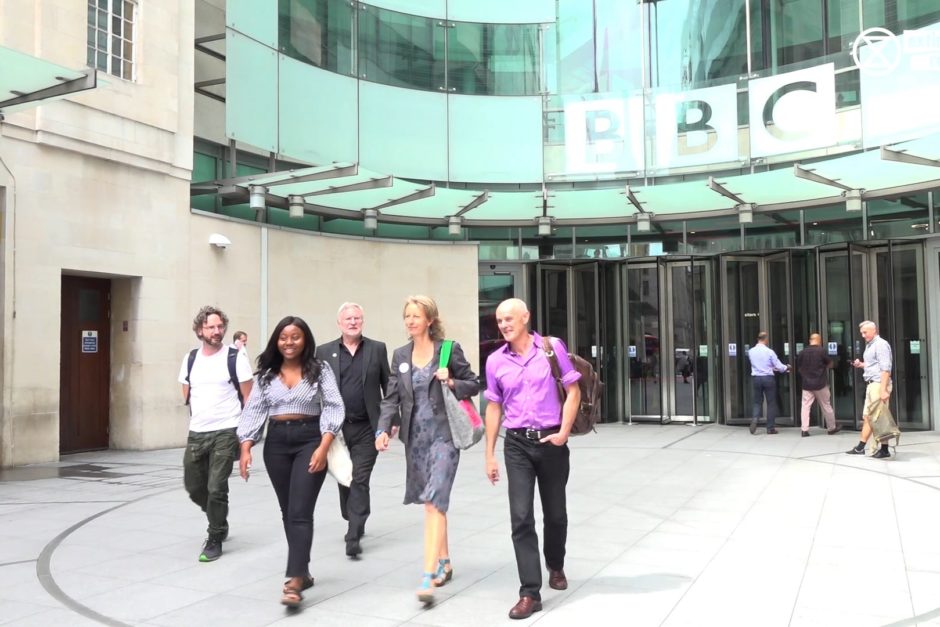 BBC, we talked about this: so why are you still letting vested interests undermine peaceful movements?

In July, Extinction Rebellion met with the BBC to discuss its approach to reporting on the crisis and how it can lead the way with an appropriate and urgent response.

We presented our 8-point plan to better face the Planetary Emergency, which includes a commitment by the BBC “to only allow think tank spokespersons on-air to discuss the climate emergency whose funding is fully transparent.”

Despite feeling encouraged by the initial response by Tony Hall, Director General of the BBC, we were disheartened this week to see the BBC’s flagship radio programme Today has once again platformed the disgraced former Metropolitan Police Commander Richard Walton on the first day of our International Rebellion.

This is the very same man that authored the propaganda report on Extinction Rebellion by the opaquely-funded free-market think tank, Policy Exchange, which we now know to be receiving money from some of the UK’s leading energy firms.

The report sought to portray our deeply non-violent and non-ideological movement as “extremist”, in order to justify the introduction of harsher laws on peaceful protest.

The BBC had already failed twice, in two previous programmes, to observe their own editorial guidelines requiring them to ask Walton to reveal who funded his report.

The BBC apology to Extinction Rebellion

At the meeting with senior BBC management this summer, representatives from Extinction Rebellion complained about the BBC giving think tanks who are not transparent about their funding a platform, particularly one which seeks to smear our reputation.

The senior managers apologised and admitted that guidelines had been broken, but then refused point blank, when asked, to not promote anonymously funded reports in future.

In Walton’s latest appearance this week on the BBC, the interviewer did ask him who had funded the report. Watkins then told a blatant falsehood, stating that no London based think tanks revealed who funded their reports.

The think-tank transparency website Who Funds You rates Policy Exchange as one of the most secretly-funded UK think tanks. Their funders include Drax, the power generator planning to build a huge gas power-plant in Yorkshire, and Energy UK, the lobbying group for all British power companies. Indeed, these energy firms have paid the company to host corporate sponsored events attended by government ministers. In a humourless and ironic twist, Boris Johnson took to a Policy Exchange-funded stage only yesterday (7 October) to decry ordinary Extinction Rebellion crowds as “uncooperative crusties”.

The promotion of discredited reports by the BBC contributes to the public perception that our media and democratic processes are open to manipulation. We call on them to halt their facilitation of vested interests which seek to anonymously smear whomever they disagree with.

We told the BBC in July that we loved them and that both we and the British people need them to be the best broadcaster they can in these times. That means reporting with truthfulness and integrity. We also said at the time that allowing people to position peaceful protestors as “extremists” puts people in our movement, especially our spokespeople, at risk. We simply question a system that is destroying life on earth. This should never be positioned as extremism.

We are a movement of ordinary people of all ages and backgrounds, united in urging the government to act on the planetary emergency for everyone’s future  – with the principle of nonviolence at its core.

If we are to have any chance of passing on a viable planet for the next generation to inherit, the system needs to change. It is time to break the hold that fossil fuel interests have over our vital democratic institutions.

1. The director general, Tony Hall, agree to a meeting with a delegation from Extinction Rebellion to discuss how the BBC can tell the full truth on the climate and ecological emergency

2. The BBC declares a climate and ecological emergency.

3. The BBC places the climate emergency as its top editorial and corporate priority by adoption of a climate emergency strategic plan, at the level of urgency placed on informing the public about the second world war.

4. The BBC to divest all pension funds, investments and bank accounts from fossil fuel corporations and their bankers.

5. The BBC, its subsidiaries and its supply chain to agree to be zero-carbon by 2025.

6. The BBC to publish an annual eco-audit of all BBC operations, including summary of key ecological and carbon data.

7. The BBC to take a lead on encouraging other national and global media corporations to join the global efforts to save humanity/nature from existential crises.

8. The BBC to only allow think tank spokespersons on air to discuss the climate emergency whose funding is fully transparent.