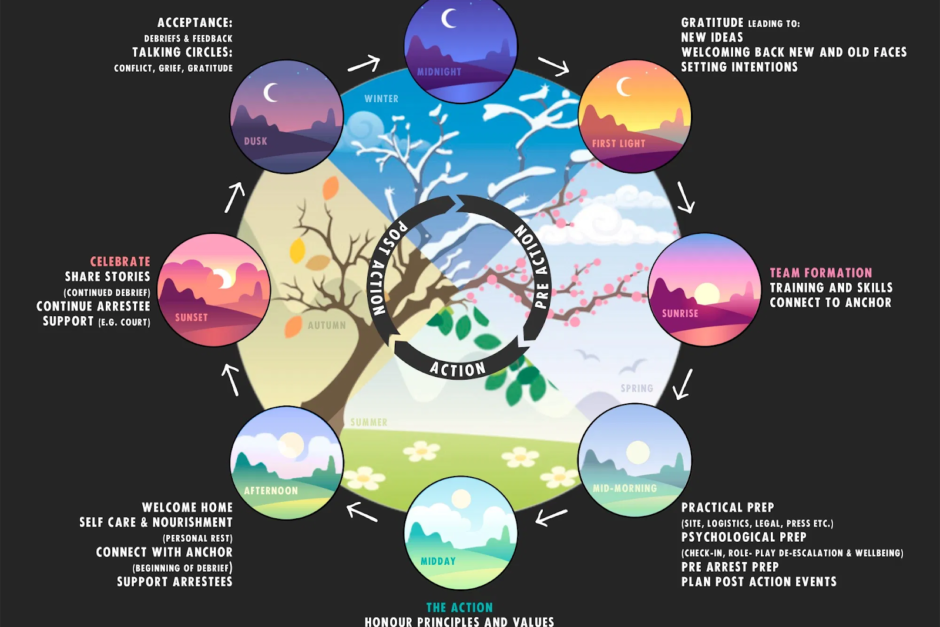 The Rebellion Will Be Regenerative – Get ready for the largest regenerative movement of civil disobedience in history.

As the opening ceremony for the International Rebellion – London gets underway from 5pm today, we wanted to take this moment to tell you what the Rebellion is really about. It is not just neon pink boats, buckets of blood on Downing Street, 91-year-olds in the arms of police, or outstretched hands super-glued to towering financial institutions.

As we move into a pivotal and unknown period of uncertainty, we know that by facing our fears – in an emergency moment of our democracy and our global ecosystem –  we can find a true and deeper love for life that allow ourselves to lean into the furthest edge of our courage.

We hear history calling to us from the future. We catch glimpses of a new world of love, respect and regeneration, where we have restored the intricate web of all life.

It’s a future that’s inside us all, and so we rise in the name of truth and withdraw our consent for ecocide, oppression and patriarchy. We rise up for a world where power is shared for regeneration, repair and reconciliation. We rise for love in its ultimate wisdom.

At the secret heart of Extinction Rebellion is our bedrock commitment to regenerative culture. Since inception, we have experimented with tools drawn from ancient and modern wisdom to put this intention into practice. Regenerative Culture is a founding principle and value – a commitment to a future where our cultures are resilient, built on love and respect for one another, all other forms of life, and the planet that sustains us. [1]

This is how we feel we can begin to stop harming and start repairing. This is where we learn – challenging ourselves and making mistakes as we go – to talk and walk the beginnings of a more regenerative world.

This rebellion – set to be at least five times larger than what was seen in April – is our moment to rebel, above all, in the name of repairing the wounded organism that is our planet, our communities, and ourselves. During this rebellion we will try to demonstrate the change we want to see in society – to show how we can nurture a new culture that is resilient and robust.

There is no single concept to be defined and followed. No two people define regenerative culture identically, yet a chorus of voices interact and inform each other. People disagree, and learn.

Hundreds of regenerative teams will be supporting rebels behind the scenes and around the clock. They will be providing emotional and practical support for those newly released from police cells after having sacrificed their liberty – a potentially traumatic experience – welcoming them with a warm smile and some hot chocolate. They will offer first aid and active listening to hold space for grieving, mediating conflicts as they arise. Plus there will be yoga, meditation and massage, if that appeals to you.

Whilst our actions disrupt, they can also often create space for us to cocreate a regenerative vision for the world. They are based on natural cycles that we find in the world around us – the hours of the day, the seasons of the year, the cycles of a lifetime – allowing people to pause and rest, reconnect and debrief, alongside periods of intense action on the street. More about this here.

Regenerative Culture at the Rebellion

Specifically in terms of wellbeing, arrestee support, climate grief, sanctuary spaces, consent awareness and healing, this is what we have planned so far:

Activists will be taking to the streets in over 60 countries from 7th October 2019 to demand governments tell the truth and act urgently on Climate change.  Many ordinary people from all walks of life will join the cause. This follows record numbers on the streets across the world  the Strike for Climate last week.