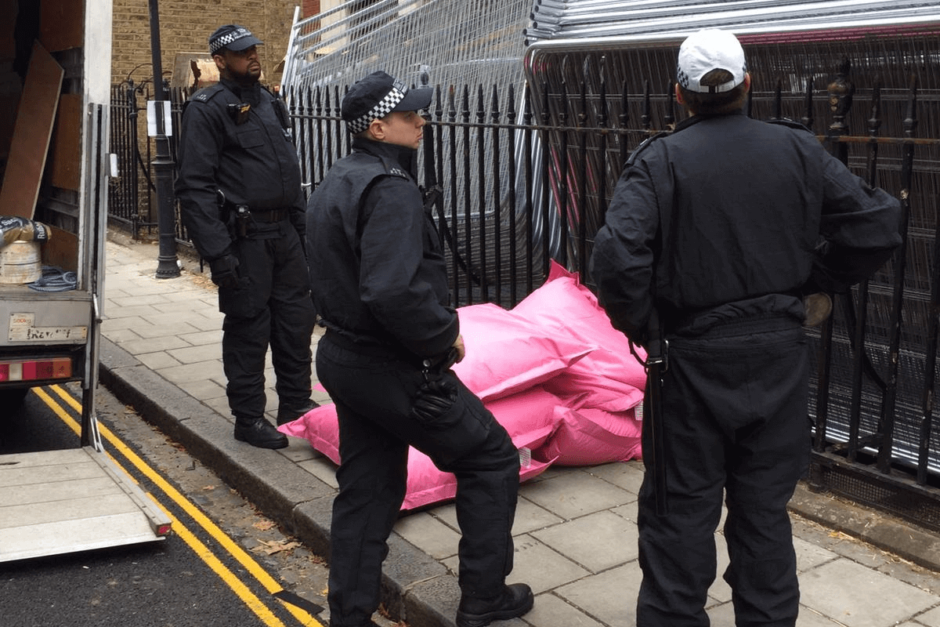 You can’t confiscate an idea

It’s not the plan, but this is not a surprise – following our brilliance in April, the police (or at least those haven’t joined us!) have been using stern language. Pre-emptive action was very much expected.

What’s more surprising, though, is that police would use such irregular procedures for such little gain. In the words of Richard Ecclestone, a former police officer now a member of XR: “These tactics are very questionable and are arguably infringing on our rights to peaceful protest”. The Shadow Policing Minister, Louise Haigh, made similar remarks.

The police have used evidence-gathering laws to seize bins, food and disabled toilets. If this equipment continues to be held, such action may well be seen as a violation of both the police’s duty of care, and of the public right to protest – especially for our more vulnerable members. We’re taking legal advice to consider our next steps.

So what was achieved with this dubious use of force?

The site in Lambeth was just one part of a much bigger network. On top of this, much of the warehouse’s equipment had already been moved out earlier this week – and the enthusiastic response to a call-out from XR logistics earlier in the morning meant a lot of the most important kit had already been moved. To top it all off – as police got ready to bring down the door, quick-witted rebels inside the building were carrying priority gear to safety through the back exit!

All of which goes to show that whatever gear we might or might not lose, we already have all we need. Our creativity, our regenerative, supportive culture, and most of all each other. And there’s a lot of us now – five times more than April. We might have lost some luxuries today, but repression of this kind can only grow our numbers and strengthen our resolve.

We proved in April that we don’t need stacks of gear to keep London quiet and clean. But some creature comforts wouldn’t hurt!

If you or anyone you know, can make a contribution of funds large or small to replace what has been lost, please give what you can:

And if you can help replace the equipment that was taken: Please bring what you can so that our Rebellion can remain safe and open to everyone. For substantial items only, that require support to get to London, please email lastminuterebellionoffers@protonmail.com.

All in all, it’s a pretty promising start. Already we’re showing what makes us unstoppable; and already the status quo has found itself in a dilemma between untenable repression and allowing us to tell the truth that our world needs to hear.

The Emergency isn’t going away, and neither are we!

Need more news about Monday? See Essential Rebellion Info for everything you need to know!

And in other news…

As British police took things out of buildings in London, the opposite was happening in Paris. French rebels have started their rebellion early by occupying a shopping centre and making themselves at home. We wish them luck!