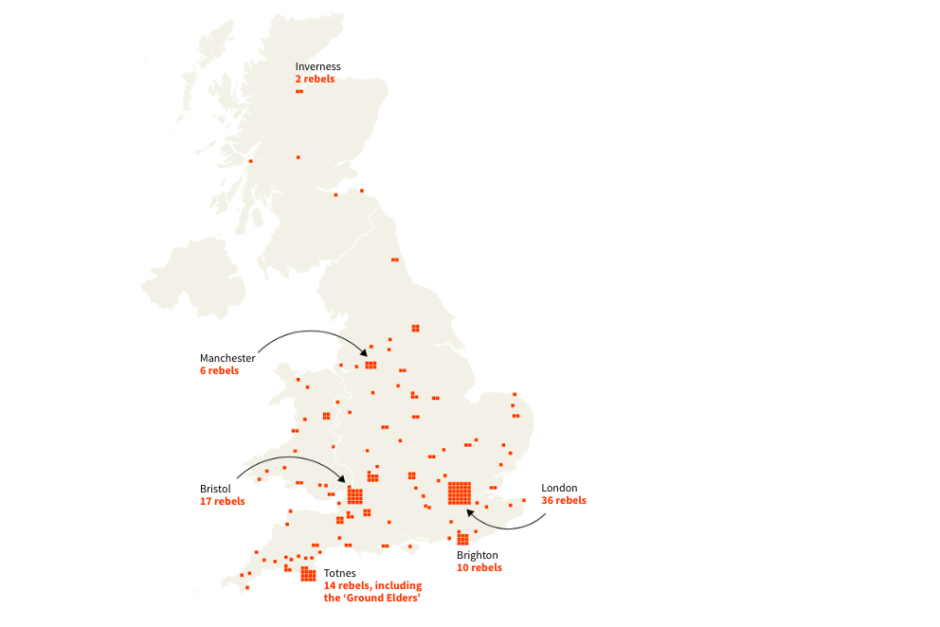 Our April Arrestees in Numbers

For several weeks during the summer, a pair of reporters from Tortoise Media came to our regular Friday plea hearings. Last week they published their report, an in-depth look at how we’re taking out truth to the courts.

As well as featuring a few of our defendants, they also produced some fascinating data visualisations that demonstrate the breadth of the movement. Reproduced with kind permission below.

How many were arrested and at what cost to the Met?

How old are the arrested rebels?

Where are they from?

What has happened to them so far?*

They’ve also produced a beautiful interactive, outlining the story of our “carefully planned chaos”. Here’s a flavour. To fully appreciate it, you need to visit the Tortoise website.

The piece features a number of our arrestees: Lewis Norton, 33 a part-time labourer from Kent; Cameron Joshi, 24, a justice campaigner from London; retirees Tim and Susan Ponton, 68 and 70, from Devon; Kim Pearce, 33, a theatre director from London; and Hanna Nuuttila, 41, a marine biologist from West Wales who was seven months pregnant when she was among the last to be arrested at Oxford Circus.

Scott Henery, a 50-year old father of three from Brighton who trains social workers; Erika Curren, 62, from Cornwall who works in a market; Lioux Maunder, 50, a teacher from Bristol; and Eleanor Milne, 35, a human rights worker from London, also get a mention.