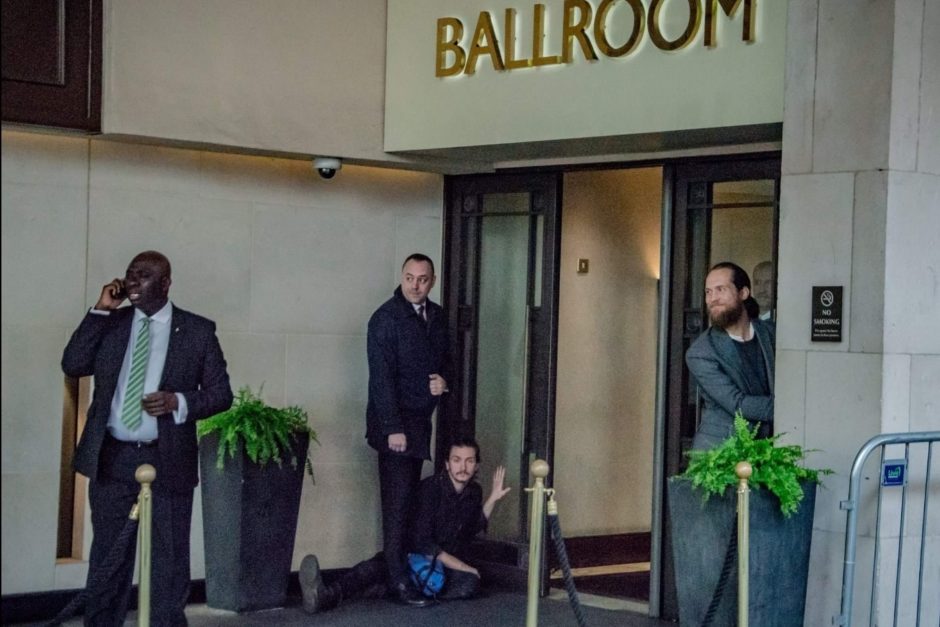 Mark Øvland: What my Heart Was Asking of Me

This morning, Mark Øvland (pictured far right) was one of six activists who used a fire engine to spray fake blood over the front of the Treasury Building in London.

Mark is already awaiting a Crown Court trial for an action on the Docklands Light Railway during the April Rebellion. Last week, after appearing in Magistrates Court on yet another charge, for a protest in February against International Petroleum Week, Mark wrote this post on his Facebook page.

I have a funny feeling this will be my last post for a while.

It’s rather long, and I don’t expect many people to read it. It’s really just meant for those of you who have expressed an interest in my ongoing court cases, as this week, finally, our ‘Petroleum 9’ case reached its conclusion. Well, almost. The trial is over but we’re yet to be sentenced.

On Wednesday we were back in court, this time at City of London Magistrates’. Six of us were still to give our defences, including me, and that made it a very long day. By the time we left, shortly before 7pm, most of us were struggling to stay awake or focussed. The judge also. But aside from a few hours of rather infuriating nit-picking it was actually pretty interesting, and needless to say very moving to hear everyone speak and give their evidence. We’re all quite different from one another and each of us brought something quite unique to the stand. We thought quaintly afterwards that together we’re a little like a 9-coloured rainbow 🙂

When my turn came to testify, I found that my chest was pounding, and I asked the judge if I could have a few moments just to stand quietly and listen to what my heart was asking of me. After a short pause I told him that I felt I needed to speak freely, that I didn’t wish to be constrained by my barrister’s questioning. When he told me that wasn’t possible, that, being legally represented as I was, I was required simply to answer the questions put to me, I asked him in that case whether I could instruct my barrister to stand down, and to represent myself for the remainder of the trial. That was acceptable apparently, so that’s what I did, but it was all way more dramatic than it needed to have been. Especially with one very kind and elderly member of the court staff coming over to check in with me about my mental health, and to see if I was feeling okay. I thanked her and assured her I was perfectly sane, it was just that I felt a strong need to speak from my heart, openly and freely.

The following day we were only due back for the afternoon, to finish with the closing statements. As a self-representer I now had the opportunity to offer one of these myself, and took the chance gladly. These closing arguments are, I gather, supposed only to address specific legal technicalities in one’s defence, the reasons one believes that according to the letter of the law one shouldn’t be found guilty. I decided to take a different approach and might well have been shut down by a different judge, but ours was very accommodating and heard me out. He had shown that same generosity throughout the trial, keen that we were each able to say what we wanted to say, and that’s something we were all very grateful to him for. It would never have crossed my mind to share what I said, but as we left the court a few of my co-defendants and members of the public gallery suggested I tried to write it up, in case others might find it helpful or interesting to hear. I don’t know about that, but on their request, and for what it’s worth, I’ve done my best to recreate it below. I think I’ve added in a couple elements from my speech the day before too, just to make it able to stand by itself.

Once all the closing arguments had been made the judge told us all that he didn’t wish to make a snap decision on our guilt, or otherwise, and had a busy few weeks ahead of him, so wouldn’t be able to sentence us until 7th October, when we’d all be due back in court to hear his verdict. We told him that wasn’t the best day for us, and thankfully he agreed to make it the 9th instead.

So we’re almost there. It’s been quite a drawn-out journey, this one..

As I said, this is likely to be my last post for a while, so may I just wish you a very beautiful and meaningful time ahead, and joy and stillness in your heart.

Every one of you is amazing.

Thank you, I will be brief.

There is nothing concerning the particulars of my case that I would like to add or expand upon. I was there, I had my hand glued firmly to one of the entrance doors, and my intention getting out of bed that morning had been to shut that conference down. My intention did however change when I arrived at the hotel and realised, given the presence of the security team, that doing so would not be possible. Now whether my actions that day make me guilty of a crime, within this narrow legal framework in which we are operating, I’ve really no idea. That is for you to decide.

What I would like to say is that I have full respect for the law. That doesn’t mean I will always abide by it. My moral compass may sometimes demand otherwise of me. It means that if I am found guilty of breaking it, I will put my hands up and accept whatever is deemed to be the appropriate sentence. That is part of the sacrifice I am willing to make, in this fight to save some sort of habitable future for everything and everyone that I love.

When yesterday I referred to the ‘petty arguments’ that were being made, I was not intending to insult the court. I was simply struggling with what I felt as a painful disconnect between that which was playing out before us – with hours of attention being given to the most banal and trivial points – and the reason we were there, the fact that our home was on fire – the very stage on which this courtroom drama was playing out, was on fire. I was frustrated, and rather incredulous. But I do understand the necessity within this system of such pedantic scrutiny of the particulars, and I respect the process as the best we’ve got. I respect, too, the roles that everyone here is playing in this particular theatre.

What I would like to remind the court, though, is just this point. The theatre of all this. This judicial system, this criminal justice system, is essentially just a story that we’re all agreeing to believe in. After all, it’s a story that, in large part, works pretty well. It would work even better were it not for the institutional racism and classism that sadly accompanies it. And throughout the trial I myself felt the strong gravitational pull to conform and play along, to constrict myself to a certain way of being and thinking, the prescribed etiquette of the legal system, and to subtly, almost unconsciously close off other ways of being and thinking.

But that wouldn’t have been appropriate. We need to remain conscious that we are telling ourselves a story of our own creation, and that it isn’t ultimately real or fixed. We need to remain open to changing the story when it no longer serves our best interests – when, for instance, the very stage on which we are performing the story is on fire, and what is needed more than anything is to rally together to put the fire out.

If we scrap for a moment the courtroom story, what are we but twenty or thirty human beings sitting in a room together, all of us equal before one another. Equally valuable, equally beautiful, equally divine. And all of us facing a near future that is sure to bring intense suffering should we allow fossil fuel exploration and use to continue on its current trajectory. From that starting point, what can we do, what’s an appropriate way forward?

Throughout this trial we have heard legal arguments referencing cases from 10, 20, 30, or 100 years ago, from this country, and from other countries, trying to demonstrate a precedent, a guide as to what we can and should do now, in this present case. But is it appropriate any more to be so backward-looking? How can we rely on the past for guidance when what we are facing is completely unprecedented. There is nothing comparable to the situation we now find ourselves in. Scientists around the world are warning that changes in the climate could within years precipitate a total collapse of civilised society. We are witnessing entire ecosystems being destroyed and animal life annihilated. This is an exceptional situation and it requires an exceptional response.

We need the courage to start a new story, or at least a new chapter. To not simply continue with the old one because it feels like that’s what we’ve always done. In this story peaceful protestors can fight for a future without being criminalised for doing so. I can’t speak for any of my co-defendants but I know that I will continue to act as I have been, and do whatever it takes – non-violently – to try and help protect a future for my beautiful nieces and nephew, amongst all the other wondrous beings who share this planet with us. No doubt I will be back in this or another courtroom very soon, in a week’s time or a month’s time. And if the old stories refuse to budge I suspect I will soon find myself in prison. We in the dock are doing our bit. But to succeed in safeguarding this habitable future we’re all going to have to play our part. We’re in this together, and we need every one of us. The judiciary too, at some point soon, must start to treat this differently, and prioritise putting the fire out over doggedly sticking to old legal stories.

It will take enormous courage to depart from well-worn structures and set a new precedent in case law. In this theatre you hold great sway sir, and you have the power to change the story. Maybe this isn’t the case that will see things turn around, maybe we’ll have to wait for another day, in another court, with another judge, for that. But I implore you to look at and consider our cases not just through the conditioned eyes of a judge but also through the eyes of a human being wishing for a habitable future, amongst a room of other human beings hoping for just the same, and to come up with an appropriate response.