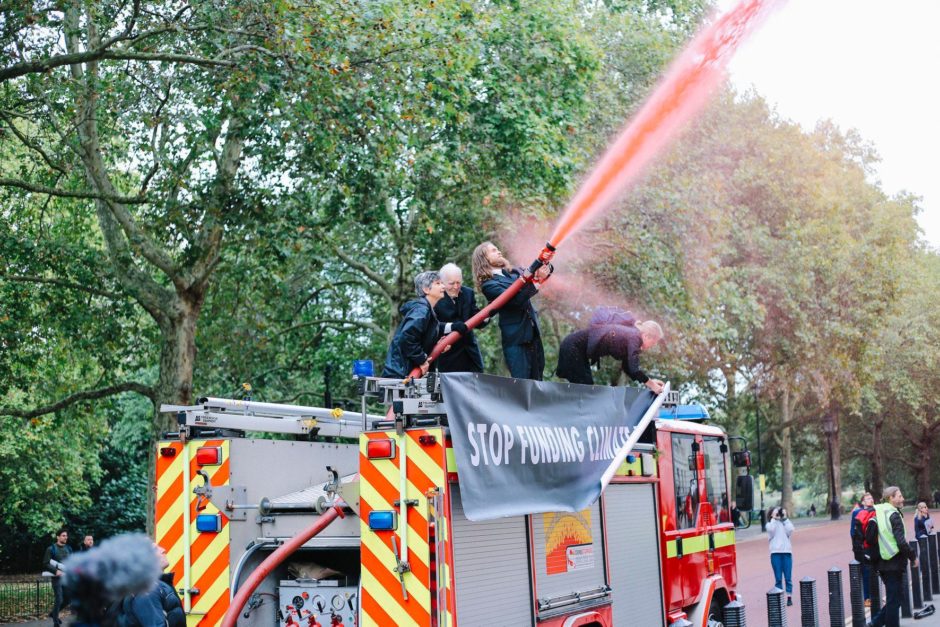 At 10am this morning, Extinction Rebellion activists have used an out of commission fire engine to spray the front of Her Majesty’s Treasury in London with 1800 litres of fake blood. They are currently holding banners at the front of the building demanding the Treasury “STOP FUNDING CLIMATE DEATH”.

The protest is being held to highlight the inconsistency between the UK Government’s insistence that the UK is a world leader in tackling climate breakdown, while pouring vast sums of money into fossil exploration and carbon-intensive projects. This comes after a report into UK Export Finance released by MPs on the Environmental Audit Committee in June of this year. [1]

This action is part of the build up towards the International Rebellion which begins in 4 days time in more than 60 cities around the world, during which Extinction Rebellion will highlight the need for a regenerative world: “It is time to imagine a future where humans no longer cause irreparable harm to themselves and their surroundings, but recognise and support the interconnectedness of life in its broadest sense. A future where our society is a network of communities that joyfully work together to adapt to change, in whatever form it may come.

“A future where our cultures are resilient, regenerative, and built on respect for one another, all other forms of life, and the planet that sustains us. A future where we have accepted the damage already done to our ecosystems, realign our relationship to the Earth with a deep understanding of our place in nature, and trust in the Earth’s ability to heal itself and find a new natural balance.”

The ‘blood’ is made from water coloured with food dye and can be washed off the building. Among the activists are 83 year old, Phil Kingston, a retired Lecturer in Social Work at Bristol University and grandfather of 4. This is the 6th time he has been arrested with Christian Climate Action and Extinction Rebellion. The other activists are retired GP, Diana Warner, 60; musician, Cathy Eastburn, 52; Forest School Leader, Árainn Hawker, 48; Mark Ovland, 36, ex-Buddhist teacher, and Liam Norton, 34, electrician from South London.

Phil Kingston said: “I fight with all my being for my four grandchildren in this situation of existential danger. And I am a Christian who cares for the Earth as God’s Creation; and for the world’s poorest peoples whose experience of injustice draws a special love from God.

“I come to the Treasury to challenge these practices and to demand radical change in them. In particular the proposal of the Climate Change Committee that UKEF works towards zero emissions by 2050 is far too late. Greta Thunberg stated to the United Nations on 23rd September that the CO2 budget for giving a 67% chance of staying within 1.5 degrees C will be entirely gone by 2028 at current emissions levels.”

Diana Warner said: “The situation around global heating and environmental destruction is so urgent that I am risking imprisonment. I consider what I am doing now with Extinction Rebellion to be more important than any other work I have done as a doctor and mother.”

Mark Ovland said: “Right now it may not seem as though there’s a world outside of the UK, the EU, and Brexit. But such a world exists and it is fast being destroyed, not least by the reckless decisions being made within this building for short-term gains. Climate breakdown is killing people as we speak, mostly, and disproportionately, indigenous people and people of colour. In so-called developed countries we won’t be far behind; unchecked, this will eventually kill us all. We have to wake up. We have to rethink our priorities.”

Cathy Eastburn said: “I’m terrified: as things stand my children do not have a future, and that goes for all children alive today.  Around the world people are already losing their lives and homes because of climate breakdown: floods, droughts, food shortages, more frequent extreme weather events, and so on.

“Last September the Secretary General of the UN said we have two years to take serious action in order to avert complete catastrophe and possible extinction. Decisions being made here in the Treasury right now – including huge subsidies for fossil fuels, financing massive fossil fuels projects overseas, airport expansion – have devastating consequences and are incompatible with a liveable future for my children and all children everywhere.

“That’s why I’m here today: to draw attention to what is going on in this building and hopefully inspire action. I don’t want to go to prison but it is a sacrifice I’m willing to make.”

In 2018 UK financial support for fossil fuel projects overseas was £2 billion, an eleven-fold increase on 2017. The UK also remains the biggest subsidisers of fossil fuels in the EU.[2]

On 10th June, Parliament’s Environmental Audit Committee report revealed UKEF’s activities to be the ‘elephant in the room’, undermining the UK’s international climate and development targets.

The UK-funded expansion and extraction of fossil fuels largely takes place in middle- and low-income countries, where we hold a responsibility for supporting a transition to renewable energy, and for increasing their resilience to the escalating climate and ecological crisis. The UK claims to be a climate leader while funding companies that contribute to greenhouse gases emitted overseas. These countries are then locked into decades of high-carbon dependency, and communities and precious ecosystems are damaged in the process.

The financial decisions of the UK government are described as ‘exploitation’ by an independent group of world leaders, including Ban Ki-Moon, the former UN Secretary General. Ban urged a ‘recalibration’ of UKEF’s policyto meet international climate trends and obligations, saying, “The time has come for the UK to change course, in the interests of the whole world.”[3]

2.     Article on 11-fold hike in overseas fossil fuel projects over past 12 months:

Activists will be taking to the streets in over 60 countries from 7thOctober 2019 to demand governments tell the truth and act urgently on Climate change.  Many ordinary people from all walks of life will join the cause. This follows record numbers on the streets across the world  the Strike for Climate last week.