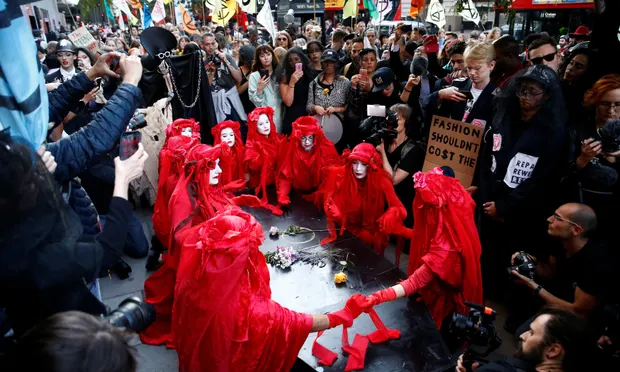 XR Unchained 3: The World Warms up for Rebellion

Washington DC wasn’t the only American city where rebels were making their demands known last Friday.

Hundreds of protesters blocked a bridge in Boston’s seaport section during the afternoon rush hour and held it for over three hours, demanding urgent action from a local and federal government still in denial about the growing climate crisis.

The action, named ‘Flood the Seaport’ and organised by XR Massachusetts, referenced Boston’s extreme vulnerability to rising sea-levels. The coastal city is already plagued by regular nuisance flooding, with sea water spilling onto roads during high tides. Unchecked global heating could see much of the city underwater.

Rebels scaled the bridge’s steel girders to hang down signs with XR’s core demands, delighted in a display by the magically ever-present Red Brigade, and danced the commute away to a live brass band. There were no reported arrests.

Rebels in Luton carried out a series of protest actions at London Luton Airport on Friday 20 th of September, highlighting the dangers of airport expansion at a time of climate crisis.

Some gave out flyers and displayed banners in the main airport terminal, while a further group glued themselves to the doors of the office of the airport’s operator, London Luton Airport Operations Limited (LLAOL). The protestors deliberately targeted the airport operator rather than passengers. No disruption was intended to flights or travellers.

sources of carbon emissions in Britain.” Indeed, passenger numbers through Luton Airport have almost doubled in a decade, with 2018 a record year at 16.6 million passengers. Current plans call for a further doubling to 32 million passengers a year.

Rebels of all ages in Lausanne creatively blocked roads and the Bessières bridge to get the federal council to communicate the climate emergency. They were inspired to block bridges by XR UK in last year’s rebellion – “we are determined and ready to stay there for several days if we have to, as has been done in London!”

Squatting on the road at both ends of the bridge, they sung and chanted slogans. They were given until 12.30pm to stop the blockage, and which point police came to arrest them with relaxed eyes smiles on their faces.

Rebels started to be removed, but creatively arranged themselves into a turtle position, so they were harder to lift. Around 2pm the toilets and an “act now” marked boat were removed by the police when suddenly a green XR banner was dropped from the top of the cathedral and a grand piano concert began.

Extinction Rebellion raised awareness of the impacts of fashion to our climate crisis by staging a funeral marking the end of London Fashion Week.

The group of 200 rebels marched from Trafalgar Square, where they gathered around two coffins. One coffin read “RIP LFW 1983-2019”, while the other simply said “Our Future”. They paraded down to The Strand, accompanied by a live band with a speech from Safia Minney, founder of Fair Trade clothing company People Tree. “I’m calling on London Fashion Week to have the courage and the strength to change everything it does,” she said.

The group also staged a die-in and swarm outside Victoria Beckham’s show on Sunday.

The rebels were mainly young people coming together to bring London Fashion Week in its current form to an end. They target the fashion industry for its environmental impact and because it doesn’t tell the truth on how it is linked to the climate emergency.

XR Madrid was created 9 months ago. Since then, they have carried out many small actions such as die-ins in the heart of the city with giant koalas and film screenings, they have papered the entire city twice with XR posters, and given talks in all neighborhoods. Their organization has helped spark several XR nodes in many cities in Spain.

Their large-scale actions include a non-violent road block at the headquarters of Repsol (a leading oil company, 34th highest global polluter) on the 15th of March and a national NVDA for the International Environment Day demanding the declaration of the Ecological and Climate Emergency on the 5th of June. This has led to a meeting with the president of the country as well as the minister for energy transition on two separate occasions.

They have helped unite civil society and created an alliance which currently has over 100 members that was responsible for a 100,000 people hitting the streets in the country’s biggest ever climate manifestation.

In the last month their activity has grown exponentially. New works have been commissioned and are being created. Massive events are being organised. Every day there are recruitment and outreach talks. With October 7 just around the corner, every day is choc-a-block full of events and activities.