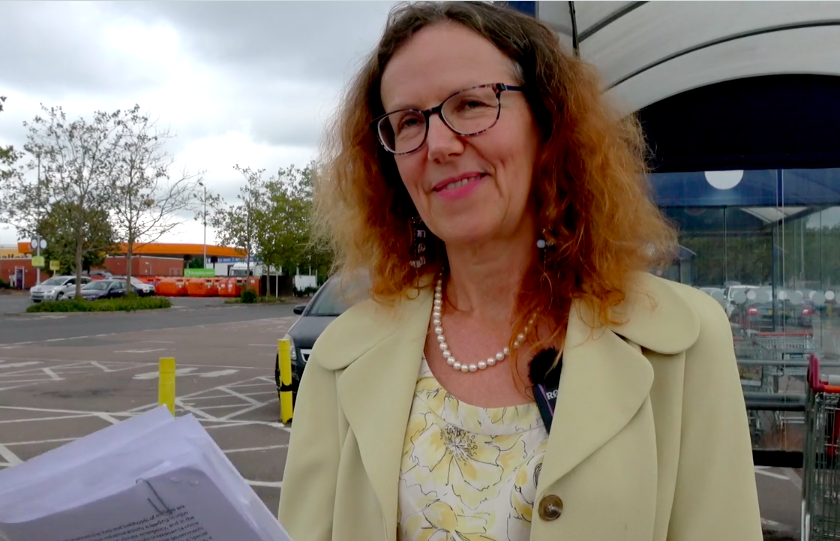 Ruth Jarman, 56, a mother of three from Hampshire who works for a small Christian charity, was found guilty last week after standing trial at Hendon Magistrates Court. She was given a 12 months conditional discharge and a total of £640 costs.

Film-maker Peter Armstrong recorded this video of Ruth’s day in court. The mitigation statement she delivered before Deputy Chief Magistrate Judge Ikram is published below. You can also read Ruth’s own account of the trial here.

“I am a Christian and a mother. My faith requires me to ‘serve and preserve’ the earth; it requires me to respect what God has created; and it requires me to love my neighbour, where that neighbour is just as much an unborn child in Bangladesh as someone next door. And the parable of the Good Samaritan requires me not to be a by-stander to violence. I cannot stand by and watch my government knowingly participating in the wholesale destruction of God’s one beautiful earth and my children’s lives without intervening.

I guess I am in court today because of the method I chose for intervention. I need you to know that I have tried everything else.

I first learned about the science of climate change while reading Chemistry at Oxford 35 years ago. I assumed then, like many people do now, that governments would listen to the scientists and act on their recommendations. In my 30s I had a moment of revelation, when the first verse of the Bible – ‘In the beginning God created the heavens and the earth,’ brought about a sudden realization that my faith and my care for the environment were related. From that moment I began to become actively involved in the environmental movement.

I remember going to a Royal Society conference while pregnant with my first child, now at University, and hearing about ‘feedbacks’ – about how Greenland would start irreversibly melting at 1.7 degrees warming, raising sea levels by 7m, how the Amazon, the ‘lungs of the earth’, was expected to dry up at 3 degrees warming. I remember a question from the audience ‘surely this would mean curtains’. The panel did not disagree. In 2004, while I was a trustee of Green Christian, I co-founded Operation Noah, creating the only UK Christian charity that focuses specifically on climate change. I have campaigned, lobbied, stood for election, spoken out on climate whenever and wherever I could, in schools, churches, community groups, trying to get the message out – that humanity has a minute window of opportunity to keep the earth habitable, and that that window will soon be closed. My family life has suffered because of the time and energy I have spent. Perhaps I should have turned off the computer, turned off the news, given my MP a bit of peace – and focused my time instead on my marriage, on bringing up my kids to be resilient to the societal breakdown that awaits them, to make more of the time we have.

One of the few things I campaigned for that actually happened was the 2008 Climate Act. It wasn’t enough, but the UK became the first country to make itself legally required to act on the science. It made me proud to be British! For a few years. In 2017, the body set up to advise the Government on sticking to the act was saying this:

“The UK urgently needs new policies to cut greenhouse gas emissions. Parliament has made commitments and the Government has a legal duty to propose policies to meet them. Despite this, no significant new policy plans have been published in the 11 months since the fifth carbon budget was set.”

And then this year the report to Parliament said: “Since June 2018, Government has delivered only 1 of 25 critical policies needed to get emissions reductions back on track.” And Lord Deben, Chair of the Committee, has now confirmed this government has persistently failed in its legal obligations declaring, “We can’t go on with this ramshackle system … the system is not fit for purpose, and doesn’t begin to face the issues. The whole thing is run by the government like a Dad’s Army operation.” Our Government is breaking its own laws on climate as well as failing in its primary duty, to protect the lives of its citizens.

So that is what has brought me to embracing peaceful nonviolent civil disobedience. I cannot not do something to stand in the way of the coming destruction. All the ordinary means of shifting society have run out of time. Two years ago, perhaps the world’s top climate scientist, Hans Joachim Schellnhuber, founder of the Potsdam Climate Institute, said, “The climate math is brutally clear: While the world can’t be healed within the next few years, it may be fatally wounded by negligence until 2020.” One year ago, Antonio Guterras, the Secretary General of the UN, someone who has to be one of the best briefed people in the world, said: ‘Climate change is the defining issue of our time – and we are at a defining moment. We face a direct existential threat…If we do not change course by 2020, we risk missing the point where we can avoid runaway climate change.’ Our government has done nothing in response to this warning. Time is running out.

Part of who I am is my need to tell the truth. A bit of a character fault when it comes to relationships, it is something that is important in the Christian tradition. The Bible is full of prophets preaching uncomfortable truths to their generation. Jesus speaking the truth led to his crucifixion. And it is the key response to the emergency we are in.  Politicians, the media, the business community and the NGOs have been lying to themselves and us about the urgency of the crisis. Only if people completely understand the absolute emergency we are in might they be willing to call for and make the economic and societal transformation that is required. For two decades my words were ignored. Two weeks on the streets of London was not ignored. Opinion polls showed concern about the environment at the highest levels on record and the Shadow Chancellor stated that the April Rebellion led directly to Parliament’s declaration of an environment and climate emergency.

I believe we are called to be faithful, not successful. Should the rebellion not ‘work’ and we fail to stop climate, ecological and civilization meltdown, I still believe that peacefully standing against the criminal negligence of our government is the only moral and truthful choice in this time of extinction.”