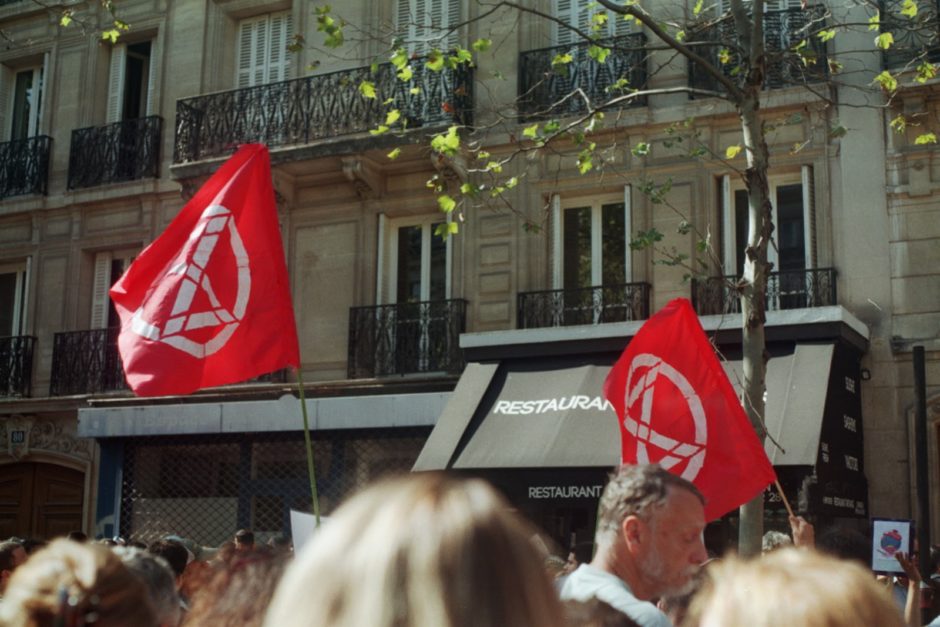 In Paris, the Climate March converges with other movements

Article and pictures by Victor Chaix

In the wake of the international Youth Strike for Climate on September 20th which brought millions of teenagers and adults alike to the streets in record-breaking numbers all over the world, a special Marche pour le Climat [Climate March] was organized in Paris and all over France – which brought about 38 000 persons in Paris and 150 000 in the country, according to organisers. Yet beyond numbers, what made this event particularly interesting was how it coincided with the 45th Act of the Yellow Vests, which came back in rising numbers from the summer, as well as anti-fascists demonstrations and others: all movements converged and assembled their force around the Walk for the Climate near the Luxembourg Gardens in a fight against the same system, illustrating the rising collective awareness of the deep inextricable and systemic causes of different issues, as well as a willingness to assemble as a wider movement of movements. The authorities, aware of this convergence and visibly afraid of it, strongly repressed this historic encounter by prohibiting all gatherings and deploying an excessive amount of police force, around 7 500 officers in Paris alone, which throughout the day showed itself unjustly violent and offensive towards all demonstrators, as well as journalists, tourists and bystanders. This regrettable democratic backpedalling, encouraged by a government that seems to have abandoned all responses other than the use of force to demonstrators’ demands for systemic change, poses crucial questions for XR France and the wider environmental movement: which strategy to adopt in the face of a continuous authoritarian response from the State? Can it merge with other struggles and tactics and if so, how can divergences be reconciled to form a genuine and impactful force?

The convergence of struggles and display of force was anticipated for long. Two weeks before the event, a tribune was signed by multiple Yellow Vests, Extinction Rebellion and Youth Strike for Climate groups calling for a “unification” of the two demonstrations forecasted on that day around social and climate justice. As the signatories argued, ‘strategies that aimed at dividing social movements have to be wiped out by an unprecedented gathering of forces. If we have failed until now, it is because we stayed separated.’ On the morning of the 21st, another one was published and this time added trade-unions and associations, as well as feminists and groups of marginalized suburban and rural citizens – it ‘rejected, in a same voice, a racist, sexist, neo-colonial and neo-liberal capitalist system that is ravaging for both our collective rights than ecosystems and climatic equilibriums’, with a rendezvous near the Champs-Elysées in the morning.

However, police interventions were so intense from the start and their numbers so considerable that the morning’s demonstrations were soon asphyxiated and the Yellow Vests’ original plan to re-conquer the Champs-Elysées was progressively abandoned. A first tear gas was thrown as early as 9am, and at the Saint-Lazare train station, chaos already installed itself and set the tone for the day. Journalists have had their press cards photographed, and some legal observers were arrested. At midday, the police prefecture of Paris announced to have proceeded to 1249 preventive controls, 104 verbalisations and 90 arrests – numbers that speak for themselves as to the government’s plan to drown the demonstration before it even started. Despite some Yellow Vests still breaking in the famous avenue, it was soon decided that because of excessive police presence and force there it was best to join the Climate March next to the Luxembourg Gardens. A mix of militant anticipation, concertation and the repressive circumstances of the day thus made possible the physical reunion of the social movement and the ecological one, on that day.

From around 1pm onwards, when the two movements met, the demonstration became one strange bouquet, if not a chaotic firework, of different movements and tactics – all tightly assembled in the closely guarded perimeter of the avenue Saint Michel. At the front, some black blocs sang anti-capitalists and anti-fascist songs. A bit behind, Yellow Vests, most of which without a yellow vest (to stay discrete in front of officers and to not have it confiscated, as it now happens) sang their usual song for ‘the honour of workers and a better world’, while in the middle of those stood, among other struggles, all environmental groups which sang their determination – ‘hotter than the climate’. Yet the frontier between them all never was as blurry and each group and causes seemed to borrow and follow the song of the other one. The critical mass that gathered at Saint Michel, very heteroclite but historically united in the same fight, was a beautiful sight to see in terms of coalition success. It did not last for long however and vulnerable groups such as families and aged citizens were soon to flee, due to a violent response from police forces as little as one hour after the march began.

Because of some violent elements at the front of the cortege (black blocs that began smashing bank windows and cash machines), police forces obliged demonstrators to move backwards by throwing tear gas directly into the crowd, which created some movements of panic and very dangerous situations. Hopefully, this surprising offensiveness to a crowd that was in most part pacific and non-violent created spontaneous cooperation and altruism between the demonstrators, which probably prevented the worst to happen. Officers also blocked every exit from the march, which led to families or simple bystanders to be stuck in avenue Saint Michel – one tourist exasperating ‘where am I supposed to go, they do not let me out! Am I obliged to stay in this demonstration now?’. After this hour of confusion and chaos, the march began to advance again, despite it being significantly thinned, and major organising groups such as Greenpeace calling for dispersion, after declaring that ‘conditions for a non-violent march are not reunited’.

The demonstration did not lose its vibrant energy, however, as a truck of the group GiveAFuck and their “rave4climate” diffused its galvanizing music, as the walk went on, through its large speakers and tireless dancers. On the microphone, to energize demonstrators and remind them the reason of their presence, a speaker sang forth “no nature, no future!” on the rhythm of the beat. As the banner so rightfully declared, “the first step to change is to join the dance”. Some violent elements and police repression happened again along the way, but eventually environmental groups and demonstrators that stayed managed to reach the Tolbiac bridge, which through great coordination was blocked and occupied by demonstrators – a disobedient action that, according to one organiser of ANVCOP21, had its location and time discretely announced just minutes before it started, to avoid excessive police presence there, and was strategically placed in front of the ministry of finance, which decides the state’s budget.

Activists asked them to ‘end subventions to fossil fuels and to unjust fiscal paradises that continue to subvention these energies’ as well as to ‘finance massively an urgent plan to alternative agricultural models’, or relating the Yellow Vests protests, ‘to put in place a climatic and social fiscality with a carbon taxation that rests on the biggest polluters and the richest, all the while implementing more redistribution to lessen the impact on the lowest revenues’. After two hours of successful occupation, the demonstrators started an un-declared march in the direction of the Bastille – the famous revolutionary landmark where the French Revolution started, on the 14th of July 1789 – and did so without incidents until reaching the place at 10pm.

The atmosphere was so animated and music so universally moving that some bystanders seemed to join the march, making it grow until destination – at least, one teenager asked me where we were going before convincing his friend to join us. The walk was, here again, heteroclite in the causes it fought for, and included peaceful yellow vests, or even an interesting group called Résistance à l’Agréssion Publicitaire (Resistance to Advertisement Agression) which took care of unhooking all bus-stop advertisement that they could come across. Yet, on the other side of Paris – the Champs-Elysées, a couple of hours later – the good-natured atmosphere faded again, as will be able to tell you these two tourists bystanders.

As Élodie from ANVCOP21 resumed at last, the ‘demonstration has been, as we know, very complicated, due to police officers and orders from the prefecture […] which wanted to absolutely divide us, yellow vests and climate movements. But in the end this day is still a success, as we are here today, all together, and that we continued to walk’ – ‘tear gas did not prevent us to show our determination’. By attempting to break the dynamic of convergence between social and environmental movements through force, it seems indeed that the French government has on the contrary mainly enforced and confirmed the two struggles’ imbrication, as both now seem to lead the same fight against an authoritarian government that upholds a rigid system, unwilling to change. The interdiction to gather, governmental ignorance and police brutality also forced normally peaceful and legal organisations to demonstrate illegally and indulge in civil disobedience, if not adopt a conflictual position with police forces.

On the strategic plane, this day of convergence and political brutality therefore poses a deep dilemma for XR France and the wider environmental movement here. For Serge, a Yellow Vest, ‘the possibility of a junction between people sensitive to the environment and those sensitive to social issues, scares the government. But if there is junction, on which base will it make itself? Homeopathic, or radical?’. If the Environmental movement is to join arms and numbers with the Yellow Vests in France, which one will have to adapt its tactics to the other? Can both movements coexist independently from each other but still work together, or should they rather intermingle their numbers and methods to form a more cohesive and politically impactful force? These are important questions that ought to be thought about and debated after this illustrious demonstration, which proved itself at once historic and limited by force.

Governmental response to the weekend’s demonstrations were deplorable. Emmanuel Macron, on the following Sunday night and on his way to New York for the special assembly on climate change, complained that ‘parading every Friday to say that the planet burns, it’s nice, but it’s not the problem!’ and advised the youth to rather ‘do grand operations of trash collection on Corsican rivers or beaches’, confirming his deaf to France’s youth. Visibly satisfied of himself, he even exclaimed that ‘they should demonstrate in Poland!’, when a recent report showed how France is still very late in its emission reduction targets. The tragedy is that despite this fact, the president has been awarded “champion of the Earth” by the UN – certainly, as Greta would say, through his “empty words” at diplomatic conferences. The Swedish icon has moreover been accused by Macron of displaying ‘overly radical positions’, that are ‘of nature to antagonise our societies’, after she filed a lawsuit against France’s climatic inaction. To prevent a radical climatic reality and de-antagonize our society, it may indeed be time for French citizens to rebel – together.