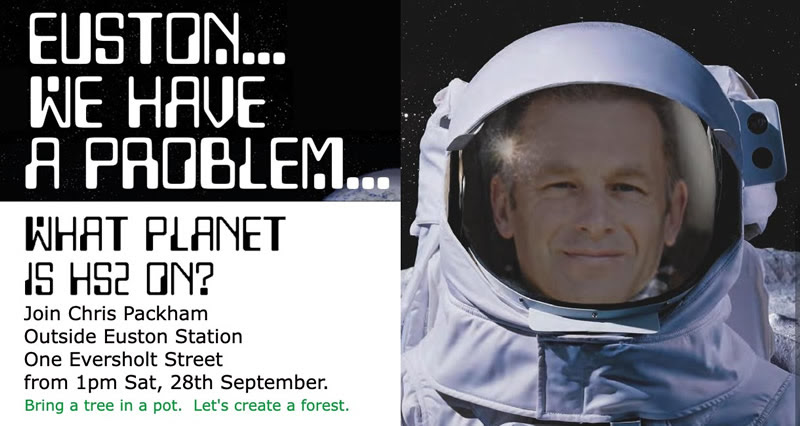 Euston, we have a problem. Chris Packham asks, ‘What planet is HS2 on?’

This afternoon Chris Packham, Extinction Rebellion, ReThinkHS2, Stop Ecocide, and many more are coming together to raise awareness of HS2’s relentless destruction of our woodlands and wildlife and damage to our climate, by creating a forest outside HS2 headquarters in Euston.

Trees have been donated for the event and everyone is invited to bring a tree in a pot to celebrate our woodlands and create a forest.  The trees will be cared for and planted at a later date.

HS2 is one of the largest deforestation programmes since the First World War [1]. Along the planned HS2 route, a total of 108 ancient woodlands, and hundreds of precious wildlife sites are due to be destroyed or damaged.  The cost of the controversial rail project has been estimated at £106.4 billion.

HS2 is currently under review and the Prime Minister is due to make a decision on the future of HS2 in December.  The government announced 12 days ago to stop work during the review unless shown to be ‘absolutely necessary’ to avoid major cost and schedule impacts should the project proceed. The destruction is still continuing. If HS2 doesn’t get the go-ahead precious woodlands and wildlife sites will have been destroyed for no reason other than to pay the contracting firms. A shameless waste of taxpayers’ money.

Chris Packham has legally challenged the Government’s plans to proceed with works that will destroy or damage our ancient woodlands and awaits the Government’s response on Friday 27 September. Chris hopes to have good news for those at Euston on Saturday.

The first ancient woodland scheduled to be destroyed is South Cubbington Woods on 9 October, campaigners report trees are still being felled [3] and that contractors shut off access to the woods on Friday. Some 250 species of flora and fauna live in these woodlands and each one’s existence is inextricably linked to each other through precious ecosystems. Ancient woodlands are called ancient because they have existed for hundreds of years.They are pure and created by nature. They cannot be replaced by man-made plantations.

HS2 plans also threaten Colne Valley Regional Park with the destruction of wildlife habitats and potential damage to 22% of London’s water supply caused by HS2 workers pile-driving into an aquifer on the site [4]. More than 2,000 trees have already been felled in the area, and tree felling continues.

Chris Packham: “On 28th September I will be at Euston Station to raise awareness of the loss of our ancient woodlands and the homes of so many of our natural species. We do have a problem … HS2 is a massive problem – the wildlife is just one part that has been overlooked and disregarded and it’s time to say we’ve had enough. Bring a tree in a pot and let’s celebrate our woodlands and create a forest.”

The International Rebellion begins in cities around the world on 7 October. Join us.

Gathering from 1pm outside HS2 Office, One Eversholt Street

Leading environmental organisations including Woodland Trust and the Wildlife Trusts, Greenpeace, the Ramblers, WWF, Client Earth, RSPB and Friends of the Earth called for the Government to “Rethink HS2”, saying “We’d Like To See HS2 Out Of The Woods Too”. Ask your MP to save our ancient woodlands and wildlife from HS2