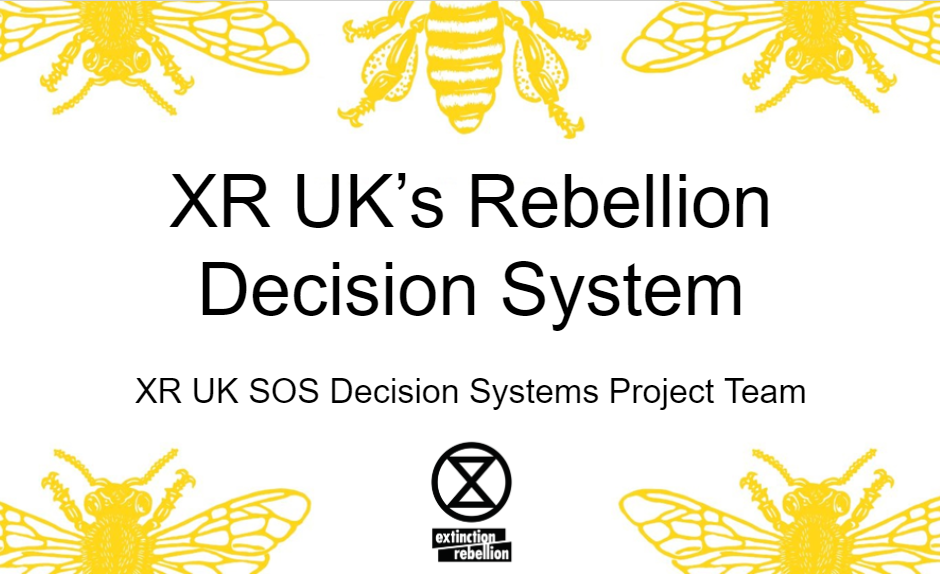 During the October Rebellion, an effective decision-making system is vital to our success. We encourage sites to use these systems, however, as they are autonomous, it is up to them. This system is meant to be clear and structured. However, we do not want following the system to prevent people from getting shit done. Holding sites and participating in actions is the priority, and decision-making systems are there to serve that. None of the meetings are compulsory. Also, this system was designed by humans and is imperfect, but we believe it’s worth trying! If this seems like there’s a lot of information, don’t worry, there will be a facilitator at each site who can guide your site through the whole decision making process. Download the Telegram and follow this link to get on the Rebellion Broadcast – a channel for verified communication only.

There are three levels to this system: Role Level, Site Level and Rebellion Level.

Decisions are made by people in clearly-defined roles such as a First Aider or Programming. People in roles with defined accountabilities have full authority to make decisions and take actions within that mandate. These people are responsible for seeking input from those with experience in the area or those affected by it. There will be many opportunities to take a role during the rebellion. Affinity Groups maintain the authority to decide whether to join an action or not.

From amongst those with knowledge and experience, we suggest that the role should be held by someone whose demographic has traditionally been excluded from decision making. People whose demographic has been traditionally included in decision making are encouraged to think about whether they step back from a role, especially a delegate role. Stepping back from decision making roles is essential to allow for others, who normally wouldn’t, to step in. However, we encourage everyone to make up their own mind and do what is right for themselves and others in the movement. Priority is given to:

Decisions made that affect the whole of the site will be made in a daily life cycle, starting with a Site Meeting in the morning and a People’s Assembly in the evening. The Site Meeting is made up of:

In urgent situations, an emergency site meeting can be called with as many people from that group as possible (with a quorum of 3 including the police liaison).

People’s assemblies are a way for the whole site to discuss issues collectively so that all voices are heard and valued equally and no one person or group is able to dominate the process. The outcomes of these will influence the daily site meeting.

There will be two teams that make decisions which might affect the whole rebellion. These decisions are in the form of advice and requests to sites who maintain autonomy to make their final decision. Both teams include a delegate from each site.

KEY: Those who are politically active within XR, e.g., a member of a Local Group’s Political or Citizens’ Assembly team and they would like to be a sites delegate on the GST, should fill out this form by 18.00 Tuesday 2ND October. We recommend filling this role with 2 or 3 people per site. If there are many people interested they can be elected by using this process.

Questions about the decision system: angeliearley@gmail.com