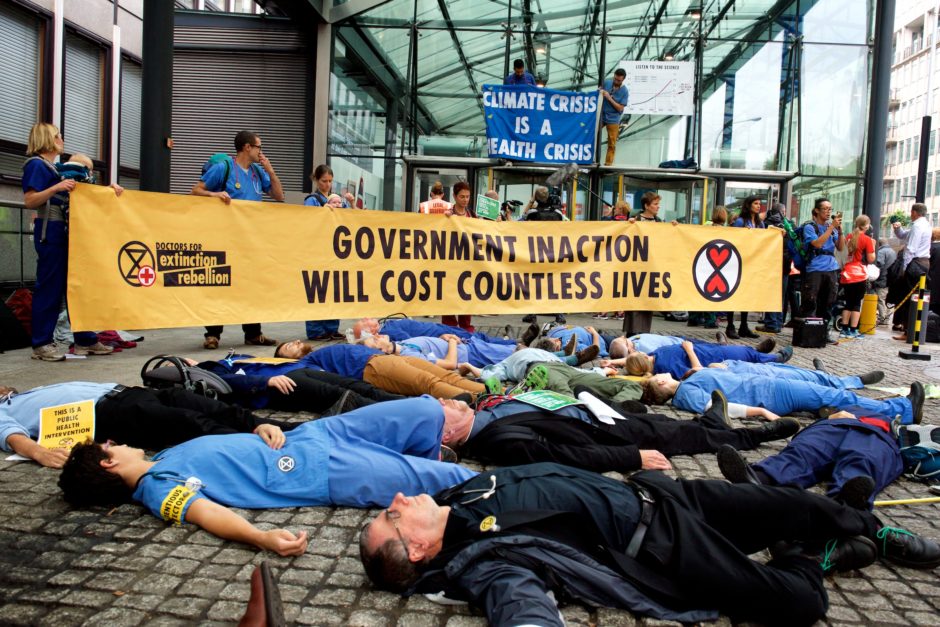 Extinction Rebellion activists this morning (Wednesday 25 September) delivered an urgent public health warning to government officials as four doctors glued themselves to the building of the Department for Business, Energy and Industrial Strategy (BEIS).

The protest was carried out by Doctors for XR, which formed earlier this year, whose membership has since grown rapidly. Despite the professional risks that doctors face from being arrested, the group felt the severity of the climate and ecological crisis was so great that peaceful direct actions such as these are justified.

The doctors have added to the criticism of the government’s 2050 net zero target, arguing that it is insufficient to protect young people alive today. Words mean nothing without proportionate action and their recent actions don’t match the science, their legal obligations under the Climate Change Act, or their commitments under the Paris Agreement.

Dr Chris Newman, co-founder of Doctors for XR and a GP working in Haringey (and one of those who scaled the building) said:

“Climate and ecological breakdown poses one of the greatest threats to public health the world has ever faced. Yet the government is failing to take meaningful steps to protect its citizens. Non-violent peaceful protests like today are essential public health interventions for getting the government to take immediate action.”

Climate and ecological breakdown is already having severe impacts (including death) on the lives of millions of people around the world. 90% of the global population is breathing toxic air, causing 8 million early deaths per year – 64,000 in the UK alone. Disease spread by mosquitoes and ticks are becoming more common worldwide with several hundred more people at risk of malaria from the rise in global temperatures. This is the tip of the iceberg with many more suffering impacts on their physical and mental health.

Dr Rita Issa, co-founder of Doctors for XR, and an academic GP working in Tower Hamlets in London, said:

“If a patient collapsed in my clinic, I would be negligent in my duty of care as a doctor if I didn’t act immediately. Yet here we have signs of our life support systems collapsing all around us; rainforests burning, rising atmospheric carbon, and ice-caps melting. We need to respond with the urgency required. That’s why we are taking peaceful direct action today and calling on the health community to join us on the streets of London from 7 October, to pressure the government to take the rapid, life-saving action we need.”

The people who will bear the brunt of the public health crisis are the elderly, children and women (especially pregnant women), people who are already poor, marginalised, those living in developing nations and/or suffering poor physical and mental health.  Responding to the climate crisis is therefore an issue of justice. Many of those most severely affected have contributed least to the problem, and particularly those living in poverty in the global south and the next generation.

The UK government claims to lead on international action against climate change while also being the biggest subsidiser of the fossil fuel industry in Europe. Their actions are bringing us all closer to the brink.