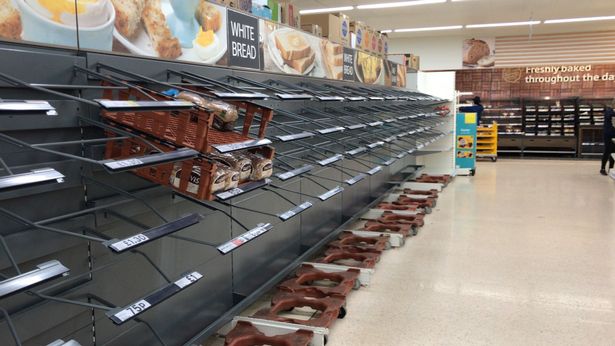 This Saturday Extinction Rebellion groups across the south-east of England will be joined by people from around the UK to block two of the primary exit roads at the port of Dover. The protest is expected to cause major traffic disruption in and around the harbour.

Similar protests are also planned by Extinction Rebellion groups across the Channel in France, to coincide with the blockade of Dover.

The blockade, named No Food on a Dying Planet, will be accompanied by a family-friendly celebration of music and food on the Dover promenade from 10am to mid evening. Speakers  will talk about the local changes we need to make to build more localised, resilient agriculture.

Extinction Rebellion appreciates the blockade will directly affect ordinary people and businesses, but we feel the action is necessary in order to call the government to action.

A report released by MPs on the Environmental Audit Committee on Tuesday highlighted the food security crisis facing the UK, which currently imports 40% of its food. A fifth of fresh food imports come from countries currently facing climate breakdown.

As one of the busiest ports in the world, Dover is one of the places where global climate and wider ecological impacts on the movement of food and people will be most clearly seen.

The Dover blockade would not be necessary if the government were telling the truth about the threats of the ecological and climate crisis and leading the changes we need to feed the population in the near future.

We appreciate that many imports aside from food come through Dover, including medicines, but have assessed that a short four-hour blockade will not cause any disruption to vital supplies.

Journalists wanting to report on the action should be at the Eastern Docks roundabout by Dover passenger ferry terminal at 10am on Saturday.

“This crisis may seem far away now but given the dependency of the UK on food imports we are extremely vulnerable.

“The government must tell the truth and act now.”

Nicholas Thurston from Extinction Rebellion Canterbury said: “For a long time we’ve known many people around the world are experiencing agriculture and food disaster as a result of climate change and having to choose whether to leave their homes or face starvation – yet we have failed to act. Now the crisis is hitting the UK, will the government finally pay attention?”

Eurotunnel figures in 2017 showed the Dover corridor handled 17% of the UK’s total trade in goods, worth an estimated £122bn. The port also handled 11.7m passengers, 2.2m cars and motorcycles and 80,000 coaches.

While climate breakdown worldwide will progressively hit our ability to import food, that same breakdown will inevitably drive the forced migration of climate-displaced persons. Consequently, the pressures on the port and our food supply can only intensify.

Food supply failures are already happening in other parts of the world, as is climate migration. Wars are breaking out as peoples and nations try to protect their access to diminishing food and water resources.

Yet neither the government, nor large parts of our press and media, are being honest about what is happening and why.

We urgently need to prepare for what we know is coming. If the government is not prepared to tell its people the truth, then others must. This is why we’ve taken this action at Dover.

A wealth of research has highlighted the food emergency facing the planet, including:

“If we act now and act together, we still have time to implement a transition plan for climate, for nature and for people’s health and wellbeing. We must be bold and ambitious, creative, courageous and comprehensive.”

“The climate and ecosystem emergency are not the only crises we face. The scale of the public health challenge is also dawning on us, from poor diets and mental health, to the effects of pollution and antibiotic resistance. What we eat, and how we produce it, is damaging people and the planet.”

“The cost of that cheap food has been paid for elsewhere in society, now and for generations to come.”

“At a time when we need to develop and mobilise consensus for game-changing actions, the country’s political leaders are caught up in a different debate.”

“As climate change will only increase the intensity and frequency of these events, agriculture must be integrated into national adaptation policies and plans and investments to protect livelihoods, maintain ecosystems and feed growing populations.”

“Agriculture must transform from being part of the climate change problem to becoming part of its solution.”

“The agriculture sector is responsible for almost a quarter of global greenhouse gas emissions, but has great potential to store vast quantities of carbon in soils, forests and oceans. We can make significant reductions in emissions by adopting smarter, integrated farming systems and better forest governance and land-use planning, and shifting to approaches that safeguard biodiversity, use natural resources sustainably and promote ecosystem services.”

“It’s much easier to farm with nature than against it.”