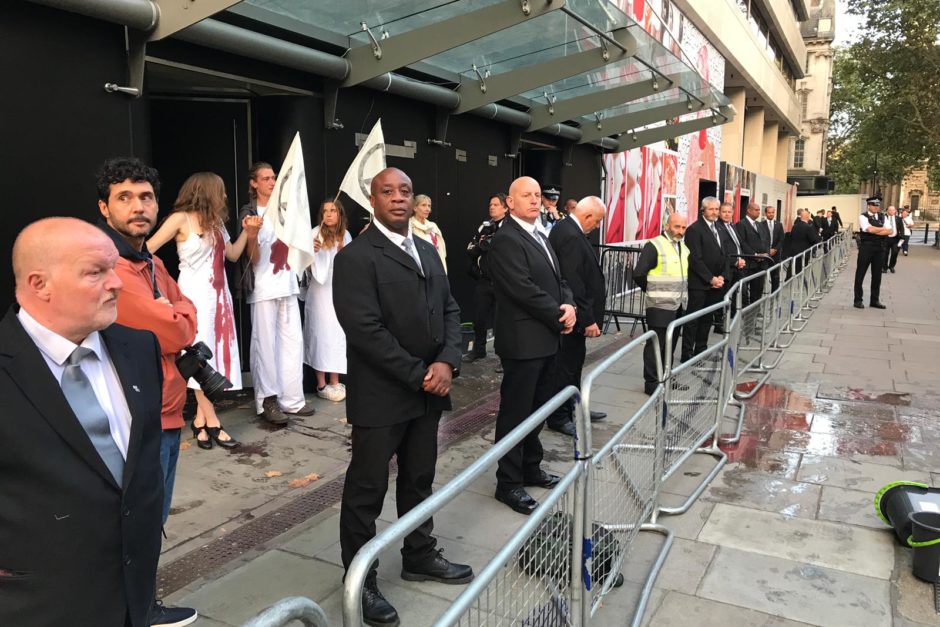 BREAKING: A bleeding red carpet is poured out blockading the official opening of London Fashion Week

This morning, 13 September 2019, five Extinction Rebellion activists in white dresses and ‘bleeding hearts’ glued themselves to the main entrance of the London Fashion Week tradeshow. Other members of Extinction Rebellion poured buckets of fake blood around the entrance and conducted a ‘die-in’, calling for the fashion industry to tell the truth about its contribution to the climate and ecological crisis.

The action highlighted the blood on the hands of the industry due to its environmental record and that ‘business as usual’ will lead life on earth towards extinction. This marks the beginning of five days of actions targeting the fashion industry and comes ahead of the International Rebellion starting on 7th October 2019, which will see cities across the globe call for immediate action on the climate and ecological crisis.

Extinction Rebellion is calling on the industry to use its huge influence to make the truth of the climate and ecological emergency known and to act accordingly. We have until 2020 to start to radically change our course. It is our duty to ask for what is necessary to mitigate this crisis, instead of what is perceived as achievable within our current systems.

The fashion industry is one of the most polluting industries in the world with a carbon footprint more than international flights and shipping combined. The industry is set to grow by 63 per cent by 2030, meaning even more destructive emissions. London Fashion Week sets a global precedent for the industry, driving the desire for consumption and fast fashion.

On the 26 July, Extinction Rebellion sent a letter to the British Fashion Council, challenging them to follow in the footsteps of Stockholm and cancel fashion week to pursue a more sustainable alternative.

“Instead of the fashion industry exploiting sustainability to sustain business as usual it should use its influence and creativity to sustain life on earth.

“The industry is set to grow by 63% between now and 2030. It is time for it to admit that it has failed to make itself sustainable.

“The fashion industry’s footprint grows season after season. It has now run out of time. We must act now.”

Hammersmith and Fulham local group will occupy Lyric Square in Hammersmith with installations, talks and workshops to educate the public on the impact of the fashion industry.

Activists will be printing on 2nd hand T-shirts with anti-fashion slogans:

“No fashion on a dead planet”

On the 14th September, Activists will be flyposting around central london to advertise the Boycott Fashion campaign.

Rebels will be blocking roads to slow down traffic around 6 London Fashion Week locations over 2 days to draw attention to the climate and ecological emergency. Swarmers will include speakers, drummers and activists in ‘corporate rebel’ outfits.

To mark the end of London Fashion, Extinction Rebellion activists will gather for a funeral procession. September 17th, meeting at 5pm, Sir Henry Havelock Statue at Trafalgar Square. At 5:30pm, rebels will march to 180 The Strand, for a ceremony to reflect on the lives already lost and that will be lost as a result of climate and ecological breakdown.