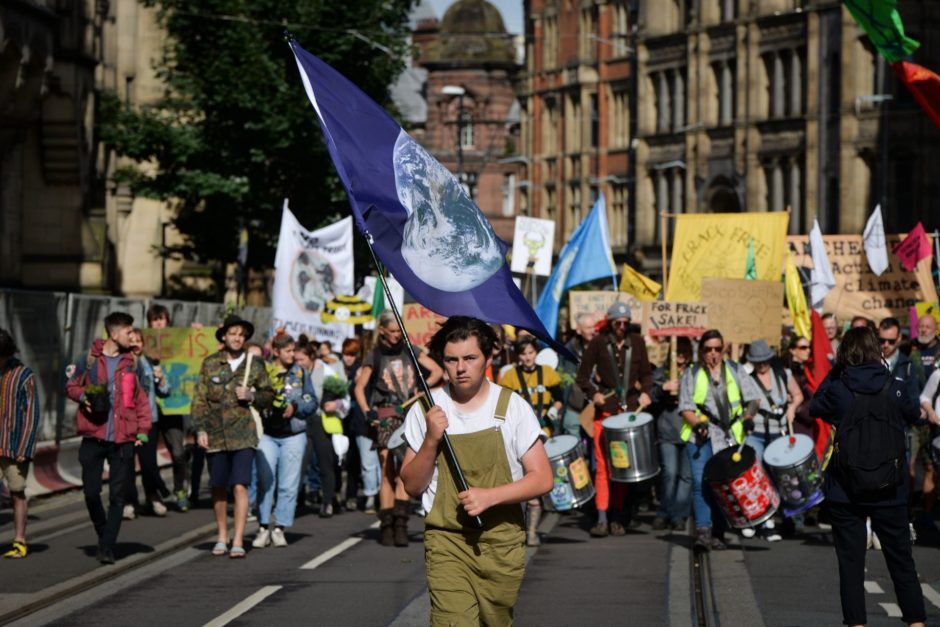 We’ve come to the end of our four-day Northern Rebellion. What an extraordinary experience. My first time at anything like this. These are  some of my personal recollections from those four days. Now, almost immediately we are into the preparation for International Rebellion London.

The Northern Rebellion  started in St Ann’s sq – then it was non-stop all day for the next 4 days. There was something deeply moving seeing the square fill up over that half hour to 7.30. A huge temporary cairn of rucksacks was built. That’s when it became real for me.

Our group blocked the north end of Deansgate. The police came after 5 or 10 minutes and diverted the traffic. Then the council came and put their barriers up in front of our straw bales and banners. The boat arrived down by John Dalton street, we set the stage up and the tents and the free kitchen that fed anyone and everyone for four days. We were a hive of purposeful activity. The public started to appear on an otherwise normal Friday. We built the Guerrilla garden out of plants in pots. We put up the huge ‘angel of the north’ sculpture made out of plastic waste and kept upright by standing it in a car with a hole cut into the roof. The car belonged to an XR member who took this opportunity to give up ownership of it. Afterward the angel and the car went to the Manchester People’s Museum.

I’m in the media group and requests for interviews started to arrive thick and fast. We were on the phone talking to media and giving interviews and inviting the media to speak to anyone. We were on the site and at the actions from this point until the end of the last day.

Soon people stopped just walking on the pavement and start to walk in the middle of the road. I didn’t meet any pedestrian who didn’t prefer Deansgate this way. Once the street was occupied the site was festive. Although we had taken and closed a major road through the centre of the city it just felt the way it should be.

After our opening ceremony we had training all day, talks, music, block printing, family area, food and just a wonderful opportunity to talk. There were tears too (me included) as we shared our fears. The classes were always full – usually bulging at the seams. The food was extraordinary, steaming away in huge pans. No one went without.

Deansgate is a very busy shopping street. We spoke to anyone who was interested. Almost without exception the response was positive. Shops were very supportive too; Forsyths music shop asked if it could be like this all the time. Waterstones put our posters up and changed the books in the window to reflect climate issues. Many shops expressed support or put posters up.

The interviews we gave covered live broadcasts, TV interviews, print and online coverage. Overall the coverage was positive – our central message of a climate and ecological emergency was not questioned. The negative coverage was mostly about inconvenience, loss of foot fall to some shops and increased fuel use as cars were diverted around the site. Interestingly, some media outlets said they would only cover us if there was a significant disruption – rather making our case for us that polite protest hasn’t worked!

As well as media I took some stints as a steward at night. We chatted with revellers coming out of the pubs on our shift till midnight. Us in our thick coats and yellow jackets talking to happy young people telling us how they recycled and were going to stop buying clothes for a month. There were a few trickier incidents, but our chief steward was a master of calm de-escalation. Police brought a homeless man to us and we gave him food and a place to sleep.

On Monday 2nd the actions spread wider. One group went to the regional head office of Barclays bank in Piccadilly Place and locked on. They were there for several hours and media interviews. The police made no arrests. There was a second lock on outside HSBC in St Ann’s square. Again, there were no arrests.

We also held a march with repeated die-ins through the city starting at the Courts where three anti-fracking protesters were objecting to the injunction from Cuadrilla prohibiting protests at the drilling sites. Then with our fabulous samba band we marched through the city to Barclays Bank, a proposed multi-storey carpark site, a fish market, Primark and HSBC. The die-ins and the band attracted a lot of attention and support and just the odd remark to ‘get a job’. People joined the march over its course and it was significantly longer by the end.

We held our closing ceremony after the march and then cleared up. We particularly did not want to be criticised that we had left a mess on Deansgate. It looked pristine after we had packed away and swept the street. We took the bales away and the council took down there barriers too. By 6:30 the road was open again.

Manchester City Council announced the next day that Deansgate will be pedestrianised if the buses can be rerouted. We’ll take this as a small victory – but what with the the airport expansion plans, the road building, the new multi-storey car parks, the investment in the city from an oil state (UAE), and the pledge from Andy Burnham that there will be no impact on business, it’s clear there’s a lot more work to do before Manchester Council’s declaration of climate emergency can be taken seriously.

From my media perspective press coverage was broadly supportive – although as usual we often see a negative headline followed by a reasonable article. The objections were not about the effects to raise awareness about climate chaos, but that members of the public had been inconvenienced. The usual clutching at straws criticisms about increased fuel use as drivers are forced to divert around us or stand idling in traffic.

At the end, my wife (who stewarded with me) and my son said I was incoherent with fatigue. I don’t regret a moment. I’m proud to have been part of the volunteers who gave so much time and love to the Northern Rebellion. But now it is time to get ready for London.