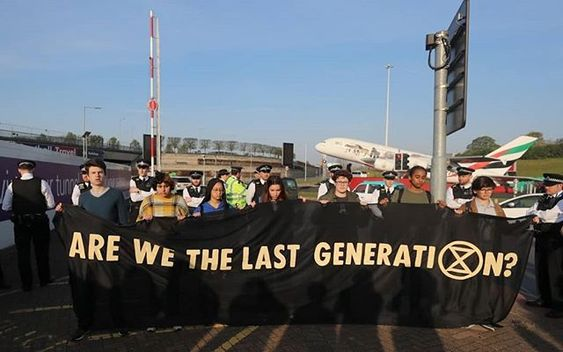 From 7am on 4 September, activists from Extinction Rebellion will meet outside Islington Business Design Centre in London to protest the World Aviation Festival. There will be theatre, music and speeches from 9am and a procession through the streets of Islington.

The World Aviation Festival at Islington Business Design Centre 4-6 September is hosting over 400 speakers but no one is billed as talking about the environmental impact of flying. The world is facing an unprecedented ecological crisis with scientists warning that we must urgently reduce emissions to avoid catastrophic climate change.[A]

What if a flight attendant got drunk and started telling passengers the truth about the real cost of flying? New theatre company, Earth Ensemble, are presenting the premiere of celebrated playwright April de Angelis’s brand new comedy Plane Truth on the 4th September at 10am outside the Islington Business Centre.

Rapid reduction of passenger numbers and flights is required to limit global heating, but the number of flights being taken globally is increasing and airports are building more runways, with expansion plans all over the UK. [B] By 2020 carbon dioxide emissions from airlines will be 70% above 2005 levels.[C] Globally aviation is responsible for 5% of CO₂ emissions, not 2% as claimed by the industry. [D] Within Europe aviation CO₂ emissions grew 4.9% last year while emissions from all other ETS industries fell 3.9%.[E]

The World Aviation Festival does not address the environmental impact of flying despite that meeting the Paris agreement goal means the aviation sector will need to reduce CO₂ emissions intensity (gCO2/RPK) by 13.8% annually from 2016 towards zero. [F]

Post-doctoral researcher within the Institute for Climate and Atmospheric Science (ICAS) at the University of Leeds Declan Finney says: “The UK aviation industry, at least, is aiming for growth beyond any conceived plan to reach UK net-zero emissions. And every flight piles more pressure on other industries to achieve further reductions or on unproven technologies, to save us in future. One of the greatest beneficial environmental impacts we can have as individuals is to reduce the number of flights we take. From a government perspective, one of the key areas in need of regulation is aviation because by the international nature of its activities it has largely been left in the clear. However, this leads to damaging discrepancies, for example, most modes of transport pay tax on fuel but aviation fuel is generally untaxed. This creates an unfair advantage for the industry.”

Festival organisers state in their reply to an email from Extinction Rebellion that “The event is not focussed on route development (increasing number of flights). The event is focussed on digitalisation, customer experience and increasing revenue on tickets sold.” However, an exclusive keynote interview shows: “The future of aviation in Istanbul – scaling up to 120 million passengers per year” the true intention of the festival, to increase aviation sector growth. The World Aviation Festival flies in the face of global efforts to address climate breakdown. This is despite increased frequency and severity of extreme climate-related disasters that can already be seen across the world.

Extinction Rebellion calls on the aviation industry to change the conversation and tell the truth about aviation’s impact on the climate and ecological emergency.

Lola Perrin of Extinction Rebellion says, “We must all unite behind the science, and when it comes to aviation the science is telling us that while planes may be safe, flying is not. The emissions from flying are now understood to be two to three times as powerful as previously thought, it’s even more urgent that any gathering of the aviation industry focuses on how to reach a zero-carbon target by 2025, along with the rest of the world. The business-as-usual focus at World Aviation Festival 2019, with its many presentations serving sector expansion, needs to be understood for the danger it puts all of us in.”

Alice English of Extinction Rebellion says, “The aviation industry is self-limiting on its current trajectory as we head for the maelstrom of climate catastrophe. Technology in that sector cannot keep pace, and it simply must not expand. The only subject for discussion is immediate action to reduce emissions. Any departure from that is genocide.”

Jon Fuller, retired senior civil servant and Extinction Rebellion member says, “Never before have so many people feared climate crisis, realising it will deliver a devastating blow to the young. But the aviation industry has absolutely no intention of paying to make all flights carbon neutral today, and is inflicting climate breakdown upon the young.”

Extinction Rebellion is an initiative of the Rising Up! network, which promotes a fundamental change of our political and economic system to one which maximises well-being and minimises harm. Change needs to be nurtured in a culture of reverence, gratitude and inclusion while the tools of civil disobedience and non-violent direct action are used to express our collective power