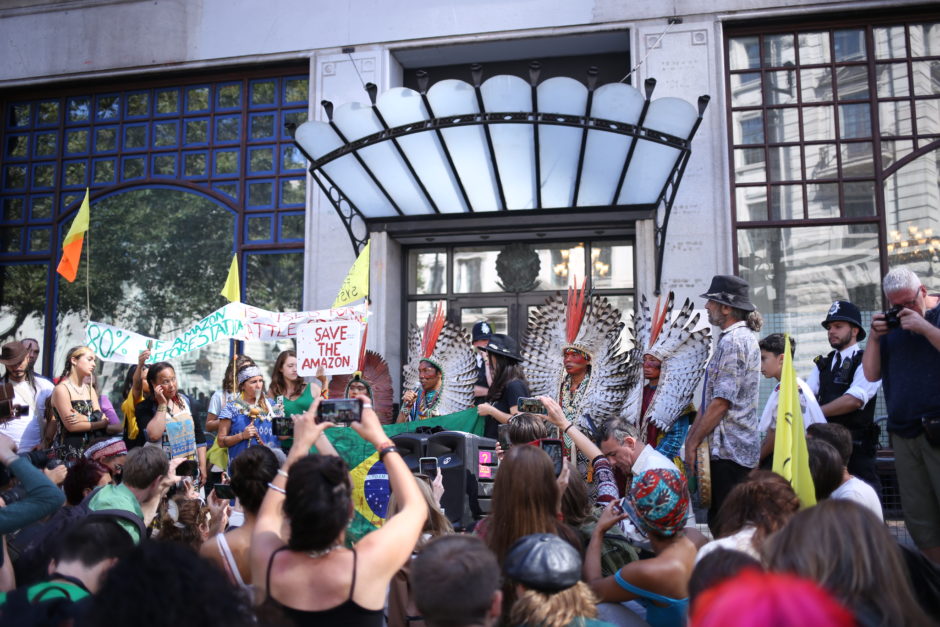 Our Lungs Are On Fire: 7 Days Match-Funding Promise

After yet another day of the Amazon being ablaze and following a solidarity action by Extinction Rebellion and others outside the Brazilian Embassy in London on Friday, a promise of match-funding has been made to encourage donations for the October Rebellion.

The Climate Emergency Fund (CEF) formed this year in response to the escalating devastation occurring across our natural world and the need for urgent action and deep societal transformation. They provide grants to those “who demonstrate the intention and capability of disrupting the inadequate and immoral gradual approach governments around the world are taking to addressing the climate emergency.”

On Tuesday this week, chair of the CEF, Trevor Neilson, pledged $350k to Extinction Rebellion if other donors will come forward and match this number before the end of August.

Ordinary citizens are hungry for climate and ecological action and support our Worldwide Rebellion starting October 7. To join the surge and donate, visit: https://chuffed.org/project/extinctionrebellion

Sarah Greenfield Clark of Extinction Rebellion says: “The volume of support that’s come through the crowdfunder shows that there is deep public hunger for ecological justice and a longing for new ways of living. To have that matched by major donors across the world sends a strong message that we are all in this together”

Bill McKibben of 350.org says: “Extinction Rebellion is a key part of the fight for a livable climate; they’re helping catalyze support across the planet, with peaceful, clever, earnest action of just the kind we need.”

Charles Perry of Sustainable Futures For All says: “A social movement, like the civil rights or anti-apartheid movement, is what we have been crying out for on Sustainability and Extinction Rebellion have answered that call – leading many thousands, with superhuman effort internationally. They are right! Enough is enough, this is an Emergency – let’s save ourselves and our natural world. Please support these amazing Volunteers and together we can stop the rampant burning of carbon/rainforests/ecosystems/fossils – which is Ecocide! Before it also becomes Genocide! Our future depends on action NOW.”

Selection of comments from the crowdfunder:

Sharon Morgan “It’s impossible to ignore what’s staring us all in the face. Either you choose to make changes for the better or you bury your head in the sand. I am full of admiration for those who take such a public stand in spite of the backlash…..”

Tracey Keatman “If you can’t be there in person, let your money talk…”