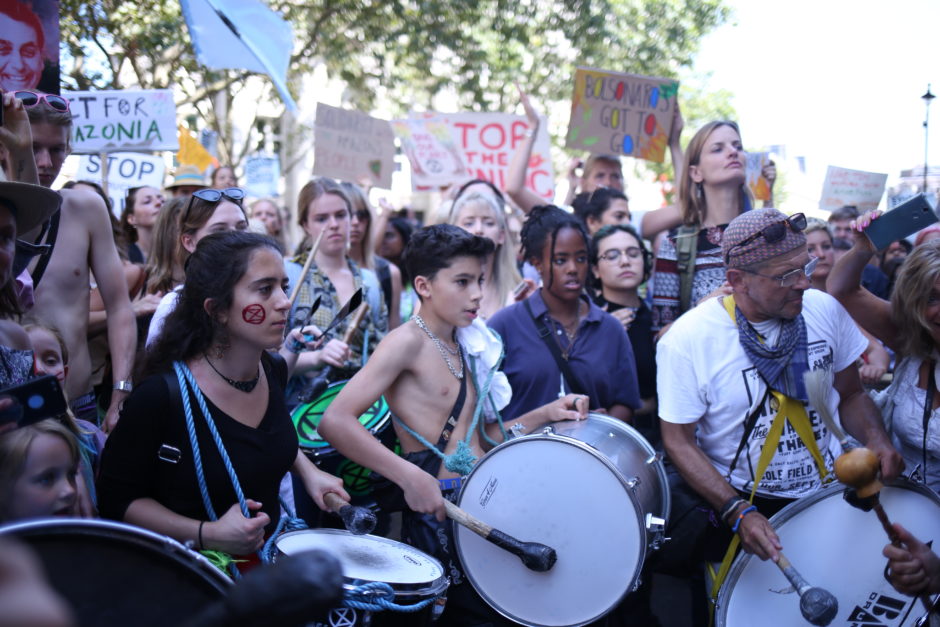 Today 11am: Our Lungs Are On Fire – Extinction Rebellion UK Protest Outside Brazilian Embassy

Extinction Rebellion UK will gather outside the Brazilian Embassy in London today from 11am – 7pm. Several hundred people are expected to attend the protest against the Brazilian Government’s environmental policies which aggravate the deforestation of the Amazon, and highlight the murder of Indigenous people killed protecting their land. Indigenous leaders of the Huni Kuin Kaxinawá will join and share their prayers and chants, and speak to the public. Extinction Rebellion Families will join the protest and hold a celebration of the trees.

Deforestation of the Amazon increased sharply in the last month. According to a report co-authored by Carlos Nobre, chair of Brazil’s National Institute of Science and Technology for Climate Change, the area risks reaching an irreversible ecological “tipping point” at which point it would move from tropical rainforest to degraded savanna. Extinction Rebellion UK are calling for governments around the world to make Ecocide – the destruction of the natural world – law.

According to Brazil’s space research centre INPE, in the first eight months of 2019 the country has experienced an 83 percent increase in the number of fires, compared with the same time period last year.

The protest today comes after six people from Extinction Rebellion UK were arrested outside the Brazilian Embassy in London on Tuesday August 13. The activists daubed red paint and sprayed messages on the embassy building to protest against the destruction of nature and murder of Indigenous people in Brazil.

Peter McCall, 31, a pub landlord  from London taking part in the protest says: “I’m taking part because the Amazon is so vital to all life on earth, including ours. I’m scared that if we lose it then there won’t be any hope for our survival and yet the Brazilian government are actively encouraging its deforestation and exploitation.”

Nicholas Till, 64, a professor at the University of Sussex taking part in the protest says: “We are in serious danger of moving beyond the point of no return. The Copernicus Atmosphere Monitoring Service (Cams) estimated that wildfires within the Arctic Circle between June 1 and July 21 2019 emitted almost the equivalent of the carbon output of Belgium in 2017. More warming means more wildfires, and more wildfires will in turn cause further warming – the world must act now or our children will pay the price.”

Charity sector worker and mother Lucie Brown, 41, attending the protest with her two sons age two and four, says: “I am coming with my young children in grief and disbelief that we have allowed this to go on for so long. We stand with the people of Brazil who face this terror today, we ask governments to stop deforestation and we hope that we continue to better understand the impact of our actions.”