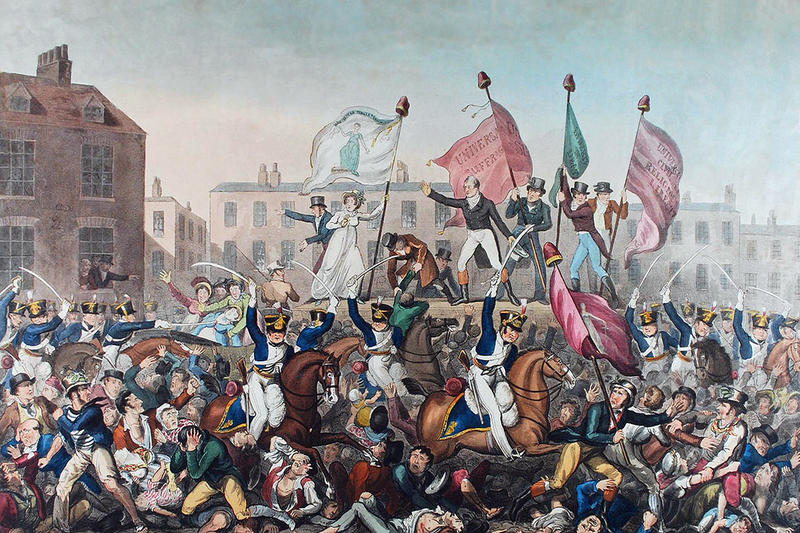 August 16th saw the 200th anniversary of the notorious Peterloo Massacre of 1819 in which mounted cavalry charged into a peaceful crowd of 60,000-80,000 people in Manchester, killing 11-15 and wounding up to 700. They had assembled to demand parliamentary reform and to protest against the poverty and inequality afflicting the general population, especially in the north of England. The Peterloo Campaign website has a brief summary of the events of that day and a poignant eyewitness account by Samuel Bamford, the radical reformer accused of treason and later imprisoned for 1 year on incitement charges:

‘The cavalry were in confusion: they evidently could not, with all the weight of man and horse, penetrate that compact mass of human beings and their sabres were plied to hew a way through naked held-up hands and defenceless heads; and then chopped limbs and wound-gaping skulls were seen; and groans and cries were mingled with the din of that horrid confusion. Many females appeared as the crowd opened; and striplings or mere youths also were found. Their cries were piteous and heart-rending, and would, one might have supposed, have disarmed any human resentment: but here their appeals were in vain. In ten minutes from the commencement of the havoc the field was an open and almost deserted space.’

This Manchester Observer article, published four days afterwards provides a vivid contemporary response. A graphic novel, ‘Peterloo: Witnesses to a Massacre’ has been released and Mike Leigh’s 2018 film, reviewed here, is worth checking out.

Many of the reformers’ demands were eventually met, with the struggle taken up by the Chartists and the Suffragettes among others. This was despite drastic countermeasures from the state, with the Six Acts instituting a crackdown on freedom of speech and assembly, and a hostile campaign directed towards leading figures of the movement, with accusations of hypocrisy that have a strangely familiar ring:

‘They have appealed not to the reason but the passions and the suffering of their abused and credulous fellow-countrymen, from whose ill-requited industry they extort for themselves the means of a plentiful and comfortable existence. They do not toil, neither do they spin, but they live better than those that do.’
This from John Edward Taylor who founded the Manchester Guardian (later to drop its first name) in the wake of the massacre as the radical press was succumbing to legal repressions and financial constraints. Visit the Manchester Meteor website for some modern radical media from Manchester including news about the recent March for Democracy ‘to honour the fallen at Peterloo’ and the new Six Acts in which the public are encouraged to submit and vote on new democratic reforms in an effort to ‘reboot democracy’.