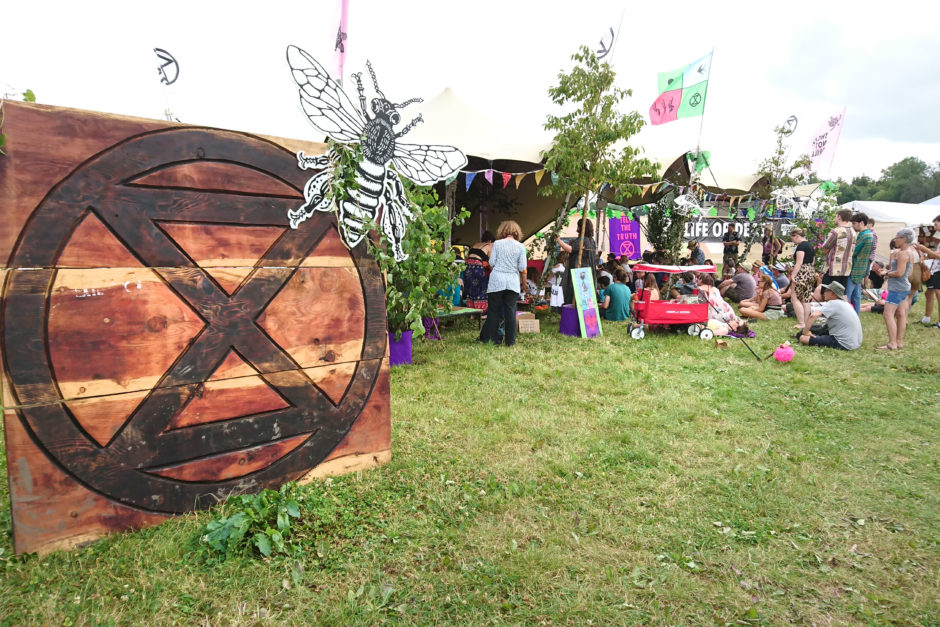 This bank holiday weekend, Extinction Rebellion will be raising the alarm on the climate and ecological emergency at Byline Festival – the world’s first festival for independent journalism and freedom of speech – to debate, discuss, dance, laugh, and change the world.

The festival, located at Pippingford Park, East Sussex, includes performances by Pussy Riot, Lowkey and Don Letts, as well as honest talks on the climate and ecological emergency. This year two of the main themes are ‘Save Our World’ and ‘People Power’.

As well as hosting the Rebel Rebel stage with a full schedule of talks, workshops, music and performances, Extinction Rebellion will open the festival with an iconic ‘Funeral for the Earth’, a performance protest against the extensive damage, destruction or loss of the world’s ecosystems, known as ecocide.  The ceremony will also honor environmental activists who have been killed defending their land and our environment at the Media Circus stage. This iconic ceremony will be accompanied by the Citizens of the World Choir, made up of refugees, asylum seekers, migrants and friends.  They will be joined by John Mitchinson and the founders of the festival – Stephen Colegrave and Peter Jukes to welcome everyone and kick off a fabulous three days. Poets Salena Gordon and Birgitta Jonsdottir then conclude the funeral with spoken word.

Extinction Rebellion’s Rebel Rebel stage, which has been touring the country and appeared at festivals including Glastonbury and Womad, has a full schedule of events from talks and workshops, on citizens assemblies and non-violent direct action, to music, comedy, performance and poetry.

Festival goers are invited to learn more about Extinction Rebellion’s third demand with a mock citizens’ assembly on climate and ecological justice – through selecting participants randomly, via a process known as sortition – through deliberation to decision making. The Route to Rapid Decarbonisation, will then be deliberated with experts Anita McNaught (former journalist for Al Jazeera), Nafeez Ahmed (investigative journalist for InsurgeIntelligence), and David Wallace-Wells (author of The Uninhabitable Earth) in a conversation chaired by Rupert Read (academic and a Green Party campaigner).

Zoë Blackler, from the Extinction Rebellion press team, said: “We urgently need brave and honest reporting on the dire emergency we’re facing. Journalists have a vital role to play in turning this crisis around. By speaking the truth they can mobilise the public to demand government action. Journalists have been behind some of the greatest acts of truth telling, exposing the massacre of innocent civilians, mass surveillance by security services and financial and political corruption by the wealthy and powerful. So we’re thrilled to be taking part in this gathering of brilliant independent thinkers who aren’t afraid to tell the truth.”

Prof Rupert Read, co-curator of the festivals Future Dome stage and Extinction Rebellion spokesperson, said: “Time is running out. Solving the Climate and Ecological Crisis is the greatest and most complex challenge that we have ever faced, and we urgently need to work together in order to do so. The Byline festival has activism and telling the truth at its heart, which is why it fits so well with our demands. It’s exciting that our two organisations will be able to come together this weekend to inspire people to act to help preserve our planet.”

Anna Hyde, festival coordinator at Extinction Rebellion said: “We are very grateful to Byline as a bastion of independent journalism and free speech, for inviting us along and being so supportive. We are looking forward to engaging with those who can help us Tell the Truth about the urgent challenges we all face from the climate and ecological emergency. We also have the Extinction Rebellion Art blockers so please bring along a piece of clothing that you would like to have printed and become a Rebel!”

Ecocide is the extensive damage to ecosystems. Extinction Rebellion demand that the legal system make ecocide law in order to protect the planet. This global law that would make corporate executives and government ministers criminally liable for the damage they do to ecosystems. More info here https://www.stopecocide.earth/

If you’d like to arrange an interview with a spokesperson, or just meet up for a chat about how we can help you report on the emergency, contact us on:

This Is Not A Drill: An Extinction Rebellion Handbook.

The Byline Festival is a festival whose aim is to promote independent journalism and free speech. The festival was founded by Stephen Colegrave and Peter Jukes in 2017. Its tagline is “Dance, Discuss, Laugh and Change the World”.

Schedule of Talks and events:

16:30 – 17:30 Future Environment: Desert Britain. How our water supply is running out – and faster than we realise