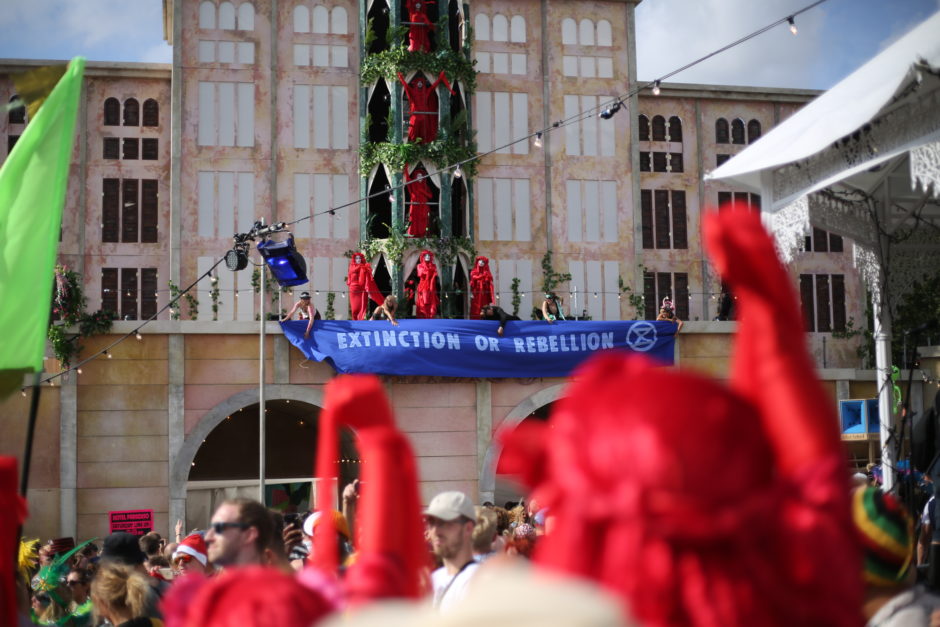 At 5pm on Sunday, Extinction Rebellion successfully overthrew the wealthy banking and oil elites at the close of this years Boomtown Festival. They stormed the palaces of the powerful, bolstered in numbers by countless newly initiated rebels. This horde of new recruits to the Rebellion will put the skills they have learned to good use in real life when Extinction Rebellion storms the Palace of Westminster in October.

For those unfamiliar with the Boomtown interactive, immersive theatre experience, the festival provides punters with an exhilarating ongoing narrative. Each year brings a new chapter in the long running story, with a new direction and characters for festival goers to become part of the story themselves as they investigate clues around the festival’s districts, streets and venues.

In previous years, the storyline has involved sinister corporations, androids, pirates and tyrants. This year’s chapter has been themed around the Climate and Ecological Emergency, with Extinction Rebellion the first real–life organisation to appear in the Boomtown immersive world and storyline as themselves.

Festival guests took part in a quest, investigating over 50 challenges around the festival, culminating in collecting a blueprint of the bankers’ and oil tycoons’ plans to build a dome over their opulent stronghold of Paradise Heights, to save themselves while the rest of the world is engulfed by the coming apocalypse. They were then directed to Extinction Rebellion’s Rebel Rebel Hideout to be trained up in nonviolent direct action so that they could join the Rebellion, march on Paradise Heights and take it over.

In staging this successful Rebellion at Boomtown, Extinction Rebellion has enacted a dress rehearsal of the real life Rebellion planned to commence in London on 7 October. With countless new Rebels recruited to the cause at Boomtown and the Summer’s other festivals, this promises to be on a far greater scale than the last major phase of Rebellion, back in April.

In addition to playing this central role in the overall plotline, Extinction Rebellion have also staged a series of mini occupations over the course of the festival, using a replica of the iconic pink boat, which occupied Oxford Circus in April. Hooked up with a mobile sound system, this hosted music and speeches about the Climate and Ecological Emergency and the need to rebel. Interactions with the “Boomtown Bobbies” proved particularly entertaining with this faux police force at first coming to arrest the Rebels, before actually being converted to the cause.

Dominic Gillett, Extinction Rebellion Boomtown Programme Coordinator said: “This is the first time the festival has written an external organisation into the Boomtown narrative. With an ongoing, socially conscious storyline, it’s been incredibly powerful to see the Climate and Ecological Emergency reflected in this year’s plotline. Extinction Rebellion want to thank Boomtown Festival for giving us this platform to raise the alarm about the Emergency. Although Boomtown is a fictional world, the issues presented here are very real. We face a chaotic future as ecological collapse and climate breakdown unravel around us and we brought this reality into the world of Boomtown. It was fun having a successful Rebellion as part of a game but now it’s time to do it for real. We call on everybody to join us on the streets of London on 7 October and Rebel for Life.”

Boomtown is a five–day festival set in the Matterley bowl in Hampshire, UK. Now heading into its 11th chapter, the 66,000 capacity event fuses a diverse line-up of underground and global music with boundary-pushing immersive art, theatre and performance coming together as a living, breathing, fictitious city.

Boomtown is on of the UK’s largest truly independent festivals.  It is made up of 14 fully immersive unique areas and follows a storyline that evolves each year to create a world within a world. Boomtown is a theatrically-led experience like no other with hundreds of actors bringing the film-like street sets to life. Citizens are encouraged to become their inner character and be a part of the story themselves