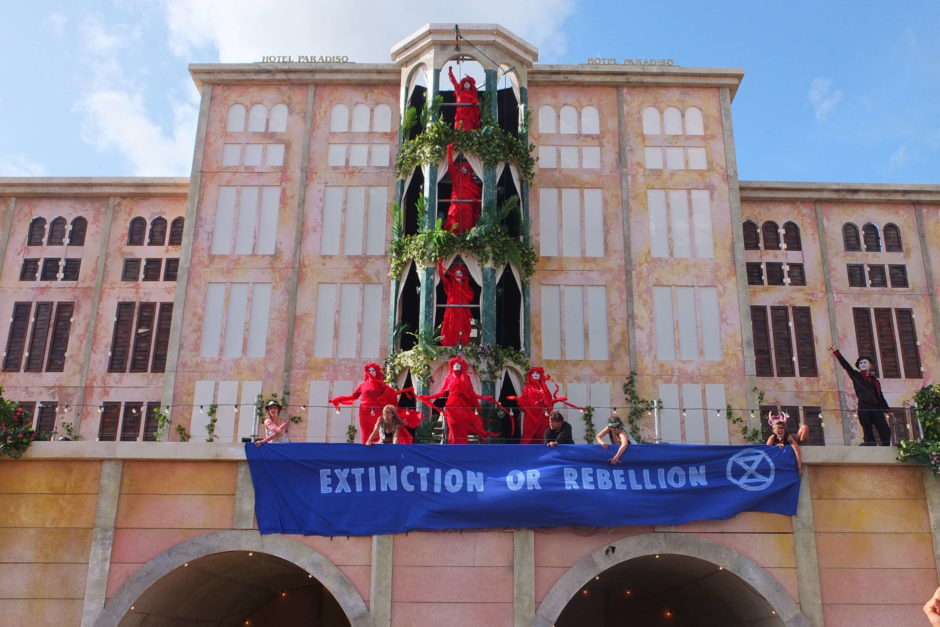 From Thursday 8th to Sunday 11th August, Extinction Rebellion will be joining Boomtown Festival for a weekend of music, celebration and immersive theatre, joining major acts such as Lauryn Hill, Prophets of Rage and The Streets.

Boomtown Fair, an annual festival, is the world’s largest interactive, immersive theatre experience, with a longrunning ongoing narrative. Extinction Rebellion will play a surprising role in this year’s instalment – Chapter 11: A Radical City – further details to be revealed.

It is the first time a reallife organisation has appeared in the Boomtown immersive world and storyline as themselves.

Extinction Rebellion activists join the Red Rebel Brigade on stage at the Lion’s Den, the festival’s main stage, for the opening ceremony on Friday. Throughout the weekend, Rebels will be in character at the Rebel Rebel Hideout, providing direct action training to prospective activists looking to take on the corrupt elites behind the Climate and Ecological Emergency.

Twice a day, Rebels will carry a replica of the nowiconic pink boat, which occupied Oxford Circus in April, through the crowd, and occupy the main stages in between sets. Hooked up with a mobile sound system, it will host speeches and music, inviting passersby to learn about the Climate and Ecological Emergency. The “Boomtown Bobbies” will then come and arrest the Rebels and impound the boat, simulating a mini protest.

At 3pm on Sunday, there will be a ‘Skeleton Rebellion’ where performers will dress in black funeral attire for a haunting parade of model skeletons of extinct animals. Further details of Extinction Rebellion’s surprise key role to follow.

Boomtown is the last of the big four of the UK’s largest summer festivals at which Extinction Rebellion have recreated the four London protest sites from April. Glastonbury was Oxford Circus, with the iconic pink boat. At WOMAD, the Rebel Rebel stage was adorned with trees like the Waterloo Bridge. Wilderness became Parliament Square, with talks and performances on an stage. And at Boomtown, Marble Arch will be projected onto various buildings and surfaces throughout the festival. In this way, Extinction Rebellion is retelling the story of the Spring Rebellion across the Summer’s festivals, while recruiting for the Autumn Rebellion.

Ems Jones, Extinction Rebellion performance artist, says: “Boomtown is a festival like no other, where the musical acts themselves, as amazing as they are, play second fiddle to this phantasmagorical world, conjured around an overarching story, with thousands of interwoven intricate subplots and myriad little details which make it feel so real. It is a microcosm of the outside world, making starkly apparent the power dynamics and forces, malevolent, benevolent and ambivalent, which govern and craft our reality. It is the perfect platform for us to utilise immersive theatre, gamification and roleplay to encourage the as yet uninitiated to take action on the Climate and Ecological Emergency, both for fun within this simulation and also in the real world, where their help is so sorely needed.”

Boomtown is a fiveday festival set in the Matterley bowl in Hampshire, UK. Now heading into its 11th chapter, the 66,000 capacity event fuses a diverse line-up of underground and global music with boundary-pushing immersive art, theatre and performance coming together as a living, breathing, fictitious city.

Boomtown is on of the UK’s largest truly independent festivals.  It is made up of 14 fully immersive unique areas and follows a storyline that evolves each year to create a world within a world. Boomtown is a theatrically-led experience like no other with hundreds of actors bringing the film-like street sets to life. Citizens are encouraged to become their inner character and be a part of the story themselves