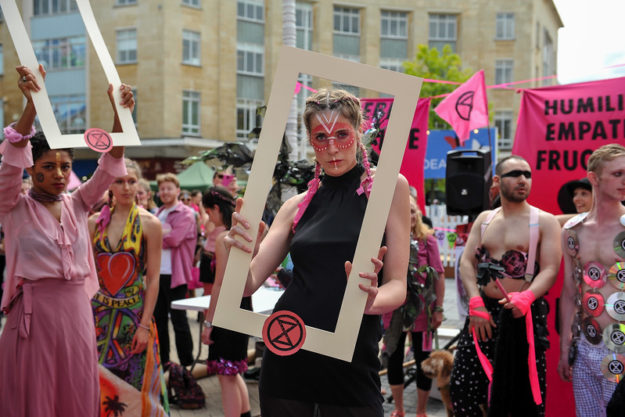 On the 26th of July, Extinction Rebellion, together with Maria Chenoweth, CEO of Traid, and Safia Minney MBE, Founder of People Tree, delivered a letter to the BFC, calling on them to cancel London Fashion Week.

View the full letter to the BFC and their reply: shorturl.at/cD237

In their letter of response, Caroline Rush, BFC CEO agrees that “We are facing a climate change emergency and all need to act”. However, the BFC believe they can “use the platform of London Fashion Week to communicate not just to the industry, but to the wider public, that not all businesses are equal, that those that support a better future, are committed to change, are those that should be supported.”

Sara Arnold, from the Extinction Rebellion Boycott Fashion team and founder of fashion rental company Higher Studio, says: “We understand that the British fashion industry is trying to change its ways but Fashion Weeks are fundamentally at odds with the urgent need to stop needless consumption and to direct resources to regenerating nature. Humanity cannot afford for London Fashion Week to continue.”

Maria Chenoweth, CEO of Traid, says: “We want LFW to acknowledge that our planet cannot sustain this level of growth and to focus on how to stop fashion creating a climate emergency.’

Laura Krarup Frandsen, a recent fashion graduate of the Royal College of Art who staged a ‘Die In’ instead of a graduate collection, says, “By continuing fashion week, BFC misleads us to believe that this crisis is nothing to be concerned about. As a new graduate, turning my back on the industry is not an easy choice, but I want my niece to have a future. This is the time for the fashion industry to reevaluate its role and show people that fashion is not to die for.”

Martina Sorghi, one of the coordinators of Extinction Rebellion Fashion Action says: “If the BFC will not cancel London Fashion Week, then, for the sake of all life, we must take matters into our own hands. Through non-violent resistance, we will disrupt the ability for business as usual to carry on, using visual, performative disruption to show the industry for what it is.”

Support for the Campaign

Last month, the Swedish Fashion Council made the bold decision to cancel Stockholm Fashion Week, in order to set new sustainability standards in the industry.

In London, designers Phoebe English and Patrick McDowell have announced their support of Extinction Rebellion’s calls for London to be the first major fashion week to follow Sweden’s game-changing move.

Designer Patrick McDowell says: “We are running out of time and we must stop business as usual. We must slow down and stop supporting a broken system.”

Designer Phoebe English says: “Fashion is in a new era. Whether it likes it or not. We must start working together towards solutions and reject damaging practices at an unprecedented speed. It is only as a communicating body across the entire industry that we can build a new type of making, selling and using fashion. When the world has run dry of resources, it will look at the wasteful and excessive garment industry as the climate criminal it currently is.”

The theatre of excess that surrounds fashion weeks is hugely out of step with the climate emergency that we face.

The fashion industry is one of the world’s most polluting and influential industries. Massive labour rights issues and animal abuse also plague this industy. As a cultural barometer of the times, fashion has a responsibility to Tell The Truth about its environmental impact.

Total greenhouse gas emissions from textile production is more than those of ALL international flights and maritime shipping combined. [1] At the same time, 34.5% of primary microplastics are due to laundry of synthetic textiles. [2] According to the Pulse Report 2019, global apparel production is projected to rise by more than 60% by 2030; from 62 million tonnes today to 102 million tonnes. [3] The effects on the planet are predicted to be beyond repair.

The letter to the BFC is part of Extinction Rebellion’s continuing campaign to persuade fashion to Tell the Truth about the climate and ecological emergency and to act in accordance. So far, Extinction Rebellion have disrupted London Fashion Week with ‘swarming’ roadblocks; blocked Oxford Circus with a catwalk of sustainable and anti-fashion garments. In June, Extinction Rebellion Bristol staged a ‘Stop the Circus of Excess’ action while XR launched #BoycottFashion, calling on people to stop buying new clothing and materials as part of #XR52.

●      Government must tell the truth by declaring a climate and ecological emergency, working with other institutions to communicate the urgency for change.

●      The government must act now to halt biodiversity loss and reduce greenhouse gas emissions to net zero by 2025.

●      The government must create and be led by the decisions of a Citizens’ Assembly on climate and ecological justice.

●      In the UK, come to one of our events, join the Rebellion Network and let us know how you can help out.

●      Check out the International XR website, with links to the French, German, Italian and UK websites.

●      And while your time and energy are of most importance, if you are financially able to donate money, see our crowdfunder.