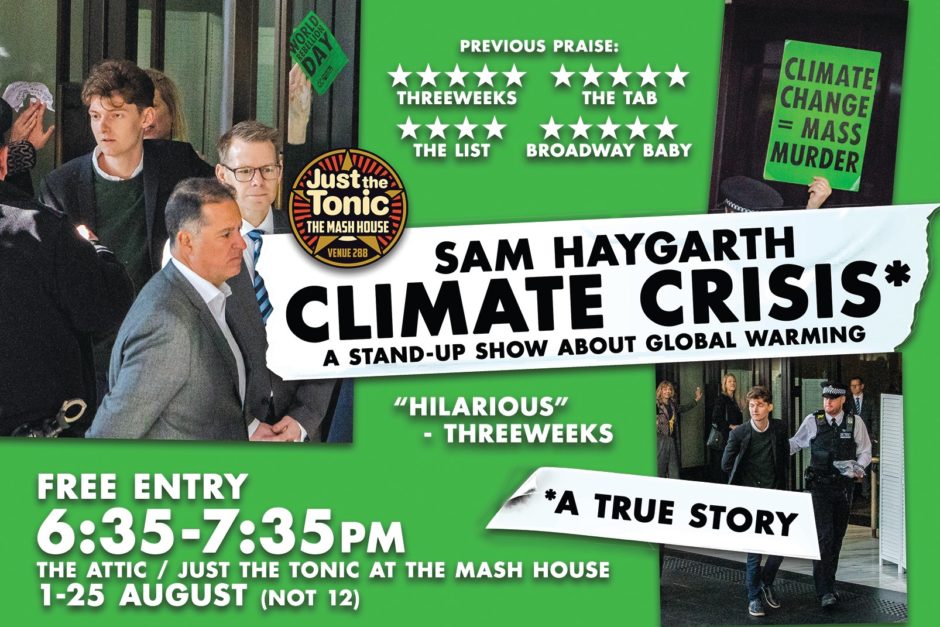 Extinction Rebellion activists are taking over the Edinburgh Fringe Festival this August, with a rolling programme of shows, discussions, and workshops.

Extinction Rebellion Scotland have been given a month-long residency at Summerhall, an exhibition space “for personal reflection and collective action”. [1] Organisers have created a packed month of visual art, installation, film, theatre, spoken word, poetry, performance, workshops, talks and more – all engaging with Extinction Rebellion’s demands and how we respond to the global climate and ecological emergency. For the full programme click here.

Also at the 2019 Edinburgh Fringe is activist Sam Knights, performing under his stage name in Sam Haygarth: Climate Crisis. Sam has been a member of Extinction Rebellion since the declaration of rebellion and was arrested earlier this year for gluing his hand to the doors of a fossil fuel conference in London. In his other life, Sam is the writer of Extinction, a short film starring Emma Thompson, and has appeared in films including Jojo Rabbit directed by Taika Waititi and The French Dispatch directed by Wes Anderson.

Sam says: “We have to dream of utopia. We have to believe in something better. And that’s where comedians, and writers, and actors can step up and speak out. If we are going to get through this together, then we need everybody on our side.”

This festival will also see a full reading of the latest IPCC report. 1.5 Degrees Live! will see more than 100 readers, performers, activists, authors and members of the public reading the latest IPCC report from cover to cover over 5 days from 12-16 August, in a shipping container at the Greenside Venue on Infirmary Street.

Katie Smith, one of the organisers and someone who has gone through the IPCC Report with a fine tooth comb, commented; “We want to have a huge, public conversation about the future we want to live in. We are bringing the IPCC report to the Fringe because it challenges us to take on “rapid and unprecedented societal transformation” by 2030 in the face of “an urgent and potentially irreversible threat to human societies and the planet”. This is too big to leave to governments and corporations. This is something for every single one of us to have our say in.”

Organiser Patrick Dunne commented; “Ahead of us we have the biggest creative project of all time….We bring this report to the Edinburgh Festivals to challenge the creative, disruptive and innovative people of the world to help us break free from business as usual and reimagine our future for the better.”

In the evenings from the 12-17 August (not 15), it will take over Summerhall basement with poetry and music and the premieres of no less than six specially commissioned plays. During the day, it will also be spilling out into the streets with guerrilla theatre with the aim of bringing people together to deal with this crisis. This will include pieces in the style of Theatre of the Oppressed developed in Brazil by Augusto Boal in the 1970s, which helped overturn fascist rule by helping audiences to find their own solutions to oppression.

One of the co-creators, writer John Farndon says: “As artists we can have powerful voices, and we felt we have to take an active role. So we formed the Earth Ensemble to create work that addresses the crisis, and  takes it out beyond the conventional venues and into streets and public places. Street theatre, guerrilla performances, invisible theatre – what works!”

The Earth Ensemble’s programme includes •  Theatre of the Oppressed in Summerhall on 12 Aug, and on the Meadows at 1.30 all week • Rage, but Hope, premiere of play about climate activism by award-winning writer Stephanie Martin 8pm 12-16) • Earth Quakes, programme of music, poetry and new shorts by writers such as April de Angelis • Carbon Addicts Anonymous – fun immersive theatre about dealing with your carbon problem.

Lucy Hopkins says: “All over the planet, for centuries, we have been damaging ourselves and each other by making bad choices, probably because life is hard and complex. Trying to shift damaging dynamics can feel impossible, but it isn’t, and those shifts are happening. Creativity is key to finding new solutions and approaches to living here on this planet together so art, performance and shared expression of all kinds is more important than ever. Games like the Regeneration Game work the muscles of connection and creation and help our minds get more comfortable in the face of the unknown. It’s also ridiculous, brilliant fun. And if the future’s not going to be fun, then what’s the point?”

Lucy Hopkins is an award-winning activist-priestess-clown-witch who has been working with XR in London, Edinburgh and Berlin since October 2018.

For more information about climate activism and the arts industry, do also check out  Culture Declares Emergency.