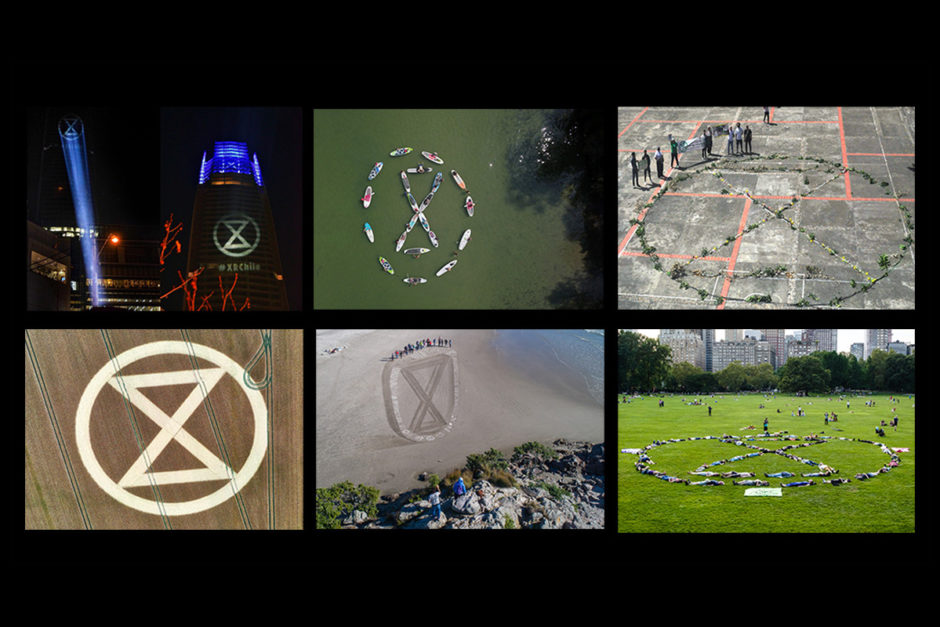 Following the appearance of the Extinction Symbol crop circle at WOMAD, giant Extinction Symbols, in a variety of mediums, appeared over the weekend in five other countries around the world, demonstrating the global reach of Extinction Rebellion. Aerial photographs of these symbols provide a potent visual message that time is running out and that internationalist solidarity is essential for tackling the Climate and Ecological Emergency.

Each of the giant Extinction Symbols is a beautiful and unique artwork. Created by or for Extinction Rebellion groups around the world, they include:

Matt Maynard, a photographer and member of the communications team of Extinction Rebellion Chile says: “The team thought carefully about where to project the mega hour-glass symbol. At 6:45pm XR blocked four lanes of traffic beneath the foot of the Costanera Centre. It was the first time Chile has organised such a disruptive action of civil disobedience. The rush-hour drivers were greeted with apologies, explanations, cake and a massive reminder projected onto South America’s tallest building that time is running out.”

Amy Board of Extinction Rebellion New Zealand says: “Many of us in Extinction Rebellion Tauranga are artists. We believe in the power of art to make change. Here we are at sunrise and out in the wind at the beach, working hard to make a symbol to show the world that we care. We know the tide will wash away our work in mere hours, but we hope people all around the world will see it and feel solidarity with us.”

Sand artist Jamie Harkins adds: “What I have done here today I have done with a stick and a bit of string and the help of friends. Everyone can take action against climate crisis, please don’t feel disempowered by the size of the problem … in unity there is freedom.”

The Extinction Symbol was created in 2011 by street artist ESP and is free for anybody to use, provided that it is never used commercially, which is strictly forbidden. Since the Declaration of Rebellion on Halloween last year, it has become closely associated with Extinction Rebellion. During the International Rebellion in April and the Summer Uprising last week, it was a common sight on multi-coloured flags adorning protest sites all  over London and the rest of the UK. The WOMAD crop circle and other giant Extinction Symbols around the world follow the creation of the largest ever human Extinction Symbol at Glastonbury festival earlier this Summer.

Extinction Symbol creator ESP explains: “The symbol represents an hourglass and the planet. It exists to draw attention to the Ecological Crisis, specifically the current mass species extinction event and climate breakdown. Please use it freely on a non-commercial basis.”