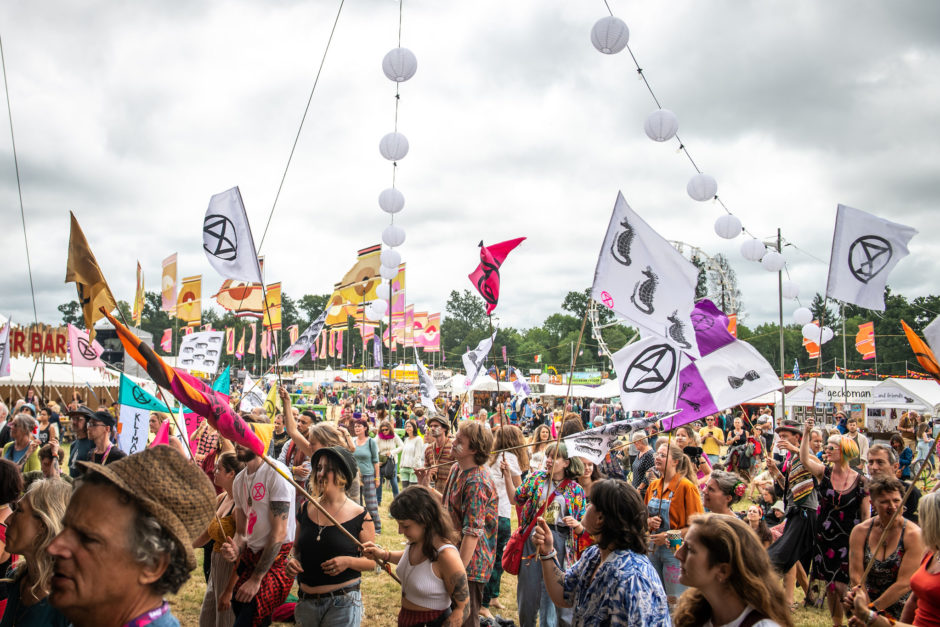 This morning (Sat, 27 July), Extinction Rebellion held a Celebration of Life on the Charlie Gillett Stage at WOMAD, the UK’s biggest festival devoted to music, arts and dance from around the world. This included a ceremonial reading of an advanced copy of the Global Witness list of murdered indigenous activists in 2018 and culminated in a Rebel Roar in defence of the planet.

Skeena Rathor of Extinction Rebellion’s Visioning team led the Celebration of Life. This honoured the courage and successes of Earth Protectors around the world, rejoiced in a shared faith in humanity and nature, and called for the restoration, regeneration and rewilding of the planet we all call home. Youth speakers from around the world were joined by Undercover Hippy, aka singer songwriter Billy Rowan, and the immersive theatre company Mango Bandits performed as birds of paradise in telling the story of Extinction Rebellion.

Skeena Rathor says: “Solving the Climate and Ecological Crisis is the greatest and most complex challenge that we have ever faced, and we need to work together in order to do so. The ethos of WOMAD and Extinction Rebellion is a natural fit, so I think we’ve found our festival home. We communicate through stories, so we are so delighted to have a stage at WOMAD and a platform to tell our story. Life is a precious and beautiful miracle. We must take joy in our existence, so we held this Celebration of Life and are calling on everyone to Rebel for Life, to Dance and Disobey and join the movement of our lives. We will not stop until we win.”

The hour long programme included a guided meditation, stories from children and a Gaelic hymn of mourning for Global South activists killed on the front line. It culminated with a call to action and children leading the audience in adding their voices to the Rebel Roar, a powerful expression of fierce defiance in defence of the planet, accompanied by a waving sea of Extinction Rebellion flags.

The Celebration also included a solemn ceremony led by Mina Jaff, of Extinction Rebellion’s International Solidarity Network. She read an excerpt from the list of indigenous activists murdered around the world in 2018 due to be published in the annual Global Witness defenders report on 30 July. Indigenous activists protect over 70% of the Earth’s biodiversity. The ceremony honoured those murdered for defending their lands and this biodiversity from western mining interests and the fossil fuel industry.

Mina Jaff says: “To read the names of indigenous activists killed is for us in the west to truly acknowledge the reality of the world today. A world where people can be killed for protecting their lands and their families. It is a reminder for us how critical it is to act in solidarity with those who are putting their lives on the line.”

Extinction Rebellion is hosting a full programme at the Rebel Rebel stage throughout the festival. This includes performances from musicians from around the world, talks on the Climate and Ecological Emergency and what to do about it, nonviolent direct action training, and various other workshops.

““WOMAD exists because of the ability of people of different cultures to collaborate positively and creatively, and so we’ve been inspired by the efforts of Extinction Rebellion to create such huge energy and global solidarity around the urgent need to tackle the ongoing climate and ecological emergency.

“It’s exciting that our two organisations will be able to come together this weekend to both celebrate the global cultures that form the core of our humanity, and inspire people to act to help preserve our species, our planet, and with them the global music art and culture we’re celebrating this weekend.”

Time has almost entirely run out to address the ecological crisis which is upon us, including the 6th mass species extinction, global pollution, and abrupt, runaway climate change. Societal collapse and mass death are seen as inevitable by scientists and other credible voices, with human extinction also a possibility if rapid action is not taken.

●       In the UK, come to one of our events, join the Rebellion Network and let us know how you can help out.

●       Check out the International XR website, with links to the French, German, Italian and UK websites.

●       And while your time and energy are of most importance, if you are financially able to donate money, see our crowdfunder.