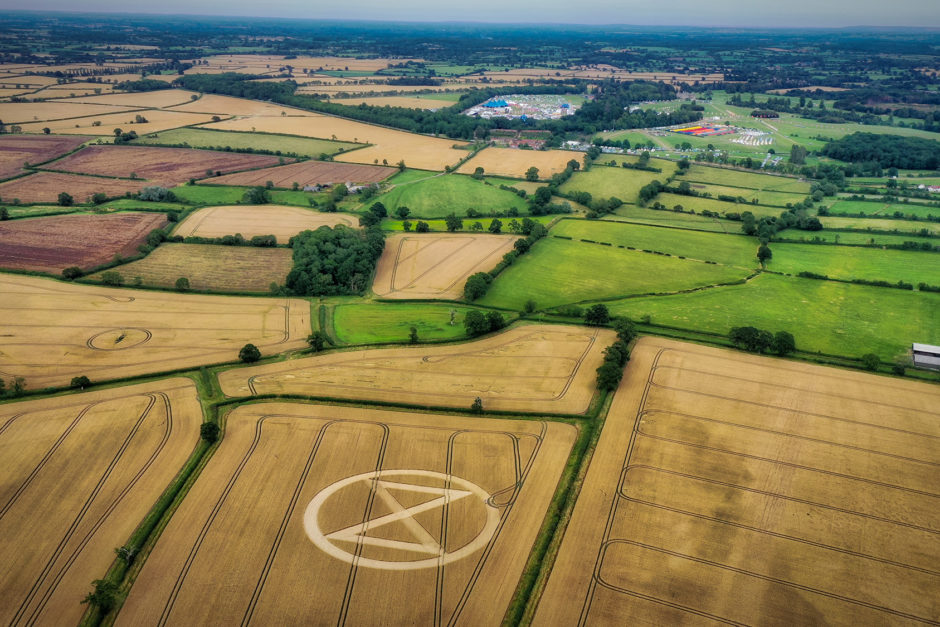 The WOMAD crop circle symbolises ecocide and climate chaos while drawing particular attention to food security issues. The flattened plants send the message that climate chaos ravages our crops, leaving people hungry and desperate, a tragedy only set to worsen.

Extinction Rebellion Festivals Coordinator Julian Thompson says: “The Extinction Symbol crop circle draws our attention to ecocide, the loss of 75% of insects and catastrophic loss of biodiversity; the overuse of herbicide and pesticide and the havoc climate chaos wreaks on our capacity to grow food. People are already going hungry around the world, even here in the UK, and yet the amount of perfectly good food thrown away every day by our supermarkets is astounding. In the Midwest of the USA, 16 million acres won’t grow wheat this year, due to flooding. This is the reality of our current systems and the Climate and Ecological Crisis we are in. The coming years will see truly cataclysmic changes to our capacity to grow food and that is when we are genuinely looking at societal collapse.”

The WOMAD crop circle follows the creation of the largest ever human Extinction Symbol at Glastonbury festival earlier this Summer. It was the work of art collective The Circlemakers, who released the following statement:

“Much of our work is inspired by the ancient sacred sites of Britain and the world – we come together, we work as a team – as they did in the past. No one of us could create what we do entirely on our own. Extinction Rebellion is about making positive change by working together. The Extinction Symbol lends itself perfectly to land art. It is the peace sign of our times. The symbol which is free to use by all (in a non commercial way) signifies the threat of extinction. The circle represents planet Earth and the hourglass within is a warning to us, that time is running out. We are in a Climate and Ecological Emergency. In the making of this crop circle – the largest Extinction Symbol ever made – we were conscious of the huge risk to our fragile planet. The time to act is now.”

Ecocide is the extensive damage to ecosystems. Extinction Rebellion demand that the legal system make ecocide law in order to protect the planet. This global law that would make corporate executives and government ministers criminally liable for the damage they do to ecosystems. More info here https://www.stopecocide.earth/