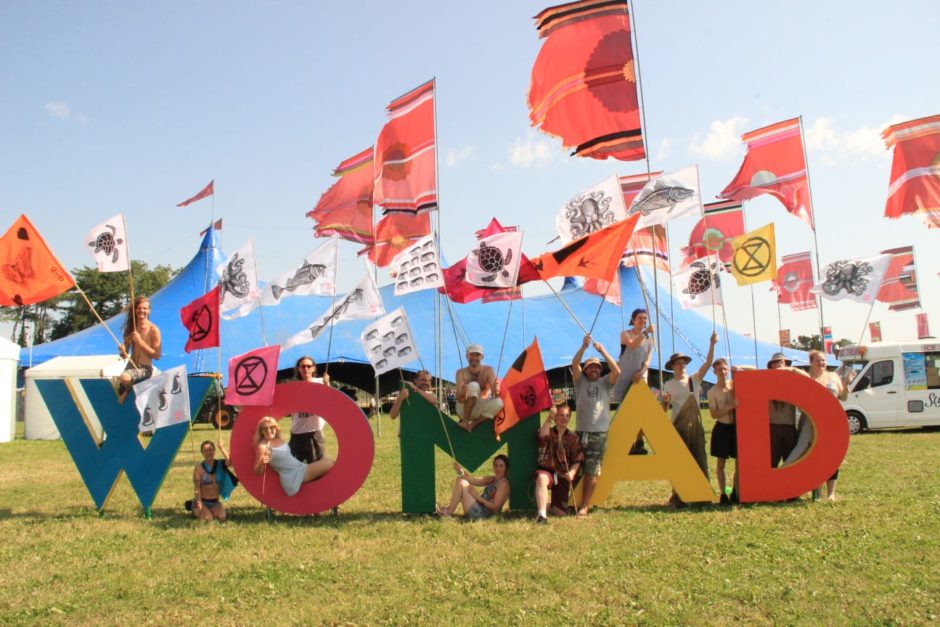 From Thursday 25 to Sunday 28 July, Extinction Rebellion will be spreading the message of Internationalist Solidarity in addressing the Climate and Ecological Emergency at WOMAD, the UK’s biggest festival devoted to music, arts and dance from around the world.

As well as hosting speakers and performers from around the world on their Rebel Rebel Stage throughout the festival, Extinction Rebellion will be holding a Celebration of Life on the Charlie Gillett Stage on Saturday morning, culminating in a Rebel Roar in defence of the planet; ceremonially reading an advanced copy of the Global Witness list of murdered indigenous activists in 2018; and recreating the Garden Bridge from the April Rebellion in London, with saplings from the trees which survived the Battle of Verdun.

From 10am on Saturday, Skeena Rathor of Extinction Rebellion’s Visioning team will lead a Celebration of Life on WOMAD’s Main Stage. This will honour the courage and successes of Earth Protectors around the world, rejoice in a shared faith in humanity and nature, and call for the restoration, regeneration and rewilding of the one planet we all call home. Youth speakers from around the world will be joined by festival musicians and the Invisible Circus in telling the story of Extinction Rebellion. There will be a guided meditation, stories from children, a Gaelic hymn of mourning honouring Global South activists killed on the front line and music in support of Extinction Rebellion from Undercover Hippy. It will culminate with a call to action and children leading the audience in adding their voices to the Rebel Roar, a powerful expression of fierce defiance in defence of the planet, accompanied by a waving sea of Extinction Rebellion flags.

The Celebration will also include a solemn ceremony led by Kofi Mawuli Klu, who will read out a list of indigenous activists murdered around the world in 2018. This list is an excerpt from an advance copy of the annual Global Witness defenders report, due to be released publicly on 30 July. Indigenous activists protect over 70% of the Earth’s biodiversity. The ceremony will honour those murdered for defending their lands and this biodiversity from western mining interests and the fossil fuel industry.

Extinction Rebellion will also be recreating the atmosphere of the Garden Bridge at WOMAD with trees decorating the Rebel Rebel tent, as they did Waterloo Bridge during the International Rebellion in April. These will afterwards be given to good homes in underprivileged neighbourhoods, just as the trees from Waterloo Bridge were.[1] In this way, WOMAD will be transformed into Waterloo Bridge, just as Glastonbury was Oxford Circus, with the iconic pink boat. Following this, Wilderness will become Parliament Square and Boomtown Marble Arch, retelling the story of the Spring Rebellion across the Summer’s festivals, while recruiting for the Autumn Rebellion.

Among the trees being brought to WOMAD are two Verdun saplings, a horse chestnut and an oak, direct descendants of the last remaining trees from the single deadliest battle in human history. The Battle of Verdun in World War One left a million dead and injured in one single military engagement. The few Verdun Trees left alive after this battle of unimaginable horror became a symbol of peace, so the Verdun saplings at WOMAD will represent loss, sorrow, peace and regrowth.

On top of all this, Extinction Rebellion will be hosting a full programme of talks, performances and workshops at the Rebel Rebel stage and tent throughout the festival. Indigenous elders from around the world will highlight the importance of internationalist solidarity in the struggle for climate justice. There will be performances from musicians from around the world, talks on the Climate and Ecological Emergency and what to do about it, nonviolent direct action training, and various other workshops.

Skeena Rathor of Extinction Rebellion’s Visioning team says: “Solving the Climate and Ecological Crisis is the greatest and most complex challenge that we have ever faced, and we need to work together in order to do so. The ethos of WOMAD and Extinction Rebellion is a natural fit, so I think we’ve found our festival home. We communicate through stories, so we are so delighted to have a stage at WOMAD and a platform to tell our story. Life is a precious and beautiful miracle. We must take joy in our existence, so we will be holding this Celebration of Life and calling on all there to Rebel for Life, to Dance and Disobey and join the movement of our lives. We will not stop until we win.”

Coordinator of Extinction Rebellion’s Internationalist Solidarity Network Kofi Mawuli Klu says: “The fight for Climate and Ecological Justice around the world is ongoing. There are 27 million indentured slaves in the world right now. Young children are forced to mine for heavy metals. Resources are being plundered by rapacious Western corporations and courageous individuals are dying on the front line trying to stop them. Climate disasters strike with increasing and frightening frequency, with the Global South hit the hardest.

“But there are also many signs of hope, with indigenous people winning victories in legal battles, conservation efforts and tree planting around the world and increasing solidarity between activists in the Global North and South. What we choose to do now does make a difference and a different way of ordering the world is within our grasp. We have one planet so let us share it together equitably and wisely. Join Extinction Rebellion and Rebel for Life”

WOMAD’s Global Festival Director Chris Smith said: “WOMAD exists because of the ability of people of different cultures to collaborate positively and creatively, and so we’ve been inspired by the efforts of Extinction Rebellion to create such huge energy and global solidarity around the urgent need to tackle the ongoing climate and ecological emergency.

“It’s exciting that our two organisations will be able to come together this weekend to both celebrate the global cultures that form the core of our humanity, and inspire people to act to help preserve our species, our planet, and with them the global music art and culture we’re celebrating this weekend.”