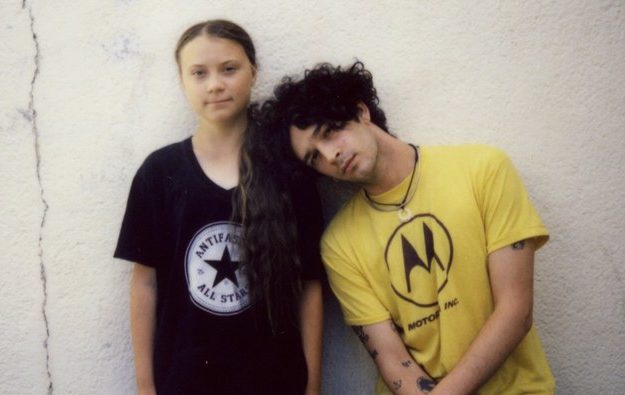 Thank you Greta Thunberg & The 1975 – “Everything needs to change”

Today, on what could be the hottest day on record in the UK, Extinction Rebellion would like to say a massive thank you to Greta Thunberg and The 1975 for their new music track – titled The 1975 – which we know will bring much needed attention to the climate and ecological emergency. As part of her involvement, Greta asked that the revenue generated from the track go to Extinction Rebellion.

We say: “Greta you are an outstanding human. You were there when Extinction Rebellion launched back on Parliament Sq in London just nine months ago. Again and again you show your support in meaningful ways – from small kind acts to things like this. We salute you sister. “

“To the 1975s, we thank you massively for your rebellious contribution and promise to put this to good use. We’re loving your commitment to rebel for life with us. Music has the power to break through barriers, and right now we really need to break through some barriers if we are to face this emergency. We are currently heading towards 4 degrees of heating for the world.”

According to the BBC’s news yesterday, there is just 18 months to act on the global heating crisis and the loss of biodiversity that threatens to unravel the planetary web of life. 1 million species are at risk of extinction and human civilisation faces total collapse if radical changes to our socioeconomic system are not made now.

Greta Thunberg said: “I’m grateful to get the opportunity to get my message out to a broad new audience in a new way. I think it’s great that the 1975 is so strongly engaged in the climate crisis. We quickly need to get people in all branches of society to get involved. And this collaboration I think is something new.”

Extinction Rebellion anticipates that this news from The 1975 and Greta will help contribute to a storm of civil disobedience as the movement prepares to support the Global Youth Strikes from 20 – 27 October and for its upcoming International Rebellion which begins Monday 7 October.

Matthew Healy, lead singer tweeted: “Meeting @gretathunberg was such an inspiration. We (The 1975) are very proud to say that our income from this track will be pledged to @ExtinctionR”

Both The 1975 and their label Dirty Hit and Universal (Polydor) have signed Music Declares Emergency, pledging to making their work ecologically sustainable and regenerative, alongside hundreds of other industry leaders including Sony Music UK. [1].

It is estimated the overall greenhouse gas (GHG) emissions of the UK’s music industry at approximately 540,000 tonnes of CO2 equivalent (t CO2 e) per year—roughly equal to the annual emissions of 180,000 cars—close to three quarters of which come from live performances, including 43 % generated by audience travel alone [2].

Sarah Greenfield Clark, 36, of Extinction Rebellion said: “This is a welcome response to the climate & ecological crisis from individuals in the music industry. They have the capacity to bring this message to millions of people. It’s crucial for others to follow, using the platform’s they have, and Tell the Truth about the emergency we are in.”