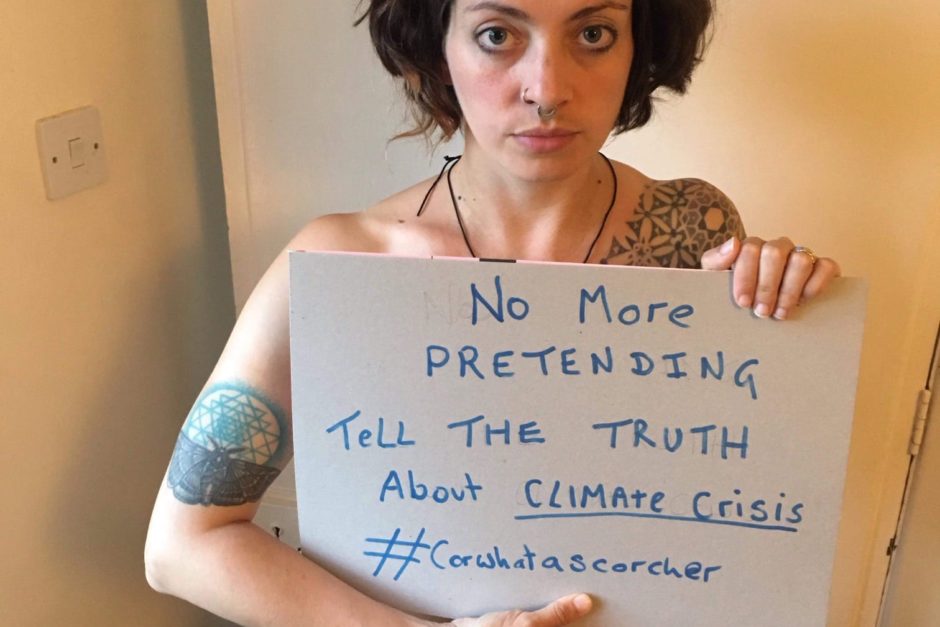 Cor, What a Scorcher! Rebels Bare All To Call on Media to Tell The Truth

Today is set to be the hottest day ever recorded in the UK. As much of the media continues to report on the freak heat as though it’s to be celebrated, Extinction Rebellion activists are taking to social media to protest this irresponsible reporting, stripping naked and using the hashtag #corwhatascorcher.

Yesterday, The Sun newspaper reported on this “scorcher” heatwave, which the Met Office has linked to climate change, using images of happy beach-goers basking in the summer sun.[1] The link to climate change is given little prominence in the coverage. To highlight this disingenuous reporting, Extinction Rebellion activists will gather today from 12-2pm outside the headquarters of The Sun newspaper (1 London Bridge Street, London, SE1 9GF), to ‘bare all’ and drop a banner with the words ‘Tell the Truth’ on, demanding the newspaper tell the public the truth about the climate and ecological emergency that is setting off extreme weather events around the world.

Extinction Rebellion UK said: “Are you feeling hot under the collar about the way the mainstream press is covering the climate crisis? Is it getting on your tits?? It is time to bare all with Extinction Rebellion to show the media that we can’t bear more of this poor reporting. We want to see pictures that match how hot the climate is getting.

“And if you are in London, do come along to The Sun HQ in London and tell them that we won’t stand for their cheek, by baring your own beautiful cheeks!”

Today is expected to be the hottest day on record, with the Met Office stating that “39C is the most likely”. While other global press coverage links climate change to reporting extreme weather reports, the UK has a reputation for being behind the curve.[2]

Last week members of Extinction Rebellion UK met with BBC staff to discuss their reporting of the climate and ecological crisis. The group also staged a die-in outside The Daily Mail HQ to highlight the death of the truth in the mainstream press.

The UK has already had more wildfires in 2019 than any year on record. More than 100 intense wildfires have ravaged the Arctic since June, and Arctic ice has been at a record low this year due to unusually high temperatures driven by climate crisis. Railway lines are buckling due to the heat. [3] [4] [5] [6]

Western Europe is currently in the grasp of a heatwave, with Paris set to hit a record high of 42C on Thursday. Half of India has been in drought for weeks, leading to the displacement of over a million people. Severe flooding following drought in India and Nepal has also led to record numbers of climate refugees. [7]

Last June over 200 people died due to the heatwave in the UK. This trend is likely to continue and we call on the press to report the link between extreme weather events and climate change, and to stop celebrating weather extremes that are harming life on this planet.

Zion Lights of Extinction Rebellion said: “I woke up last night in a state of despair worrying about how my children will face what’s coming. They’re so young. I feel so helpless. The way a lot of the mainstream media currently reports on and celebrates heatwaves in frankly shocking. Globally millions of people are being displaced due to climate realities including drought, while we joke about basking in the sun. 266 Britons died in the UK last year due to the heatwave in June. We must change the narrative on climate crisis and tell the truth about what is happening.”

Caspar Hughes of Extinction Rebellion’s Media Tell the Truth group said: “The media needs to become the public service it was during the onset of World War 2. We have 11 years to stop our children from inheriting a hellish planet. Without the media telling the truth, throughout the press, we will fail that test.”

Sarah Clark of Extinction Rebellion said: “You hear from the media the argument that people don’t want to hear the truth, or that it doesn’t sell papers. But I’m hearing people on the school run struggling to keep their little ones cool at night, their pets becoming faint, and the onset of heat-induced headaches. Surely these people deserve to know that there is more of this extreme weather to come.”