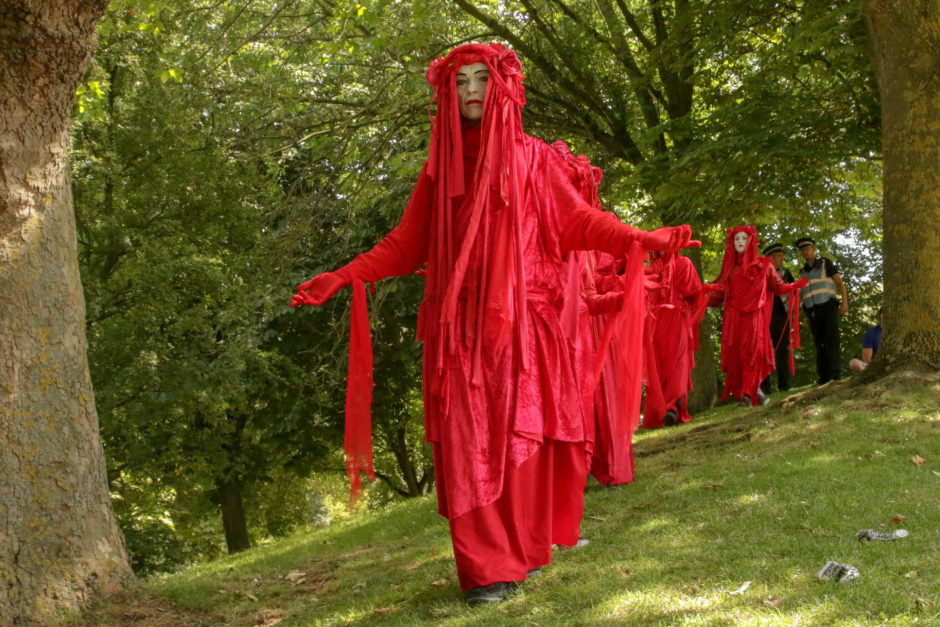 As the sun set on Extinction Rebellion’s Summer Uprising, protesters defied heavy rain and took to the streets for the final time. The day brought powerful community activism to the forefront for the second time this week in East London as local people – schoolchildren, parents and grandparents – swarmed concrete lorries entering the Thames Tideway Plant. Across the city, the rebel camp at Waterloo Millenium Green emptied out as protesters left the boat behind and made their way to Parliament Square to join the Youth Strikers.

As protesters in Leeds peacefully retreated from five days of occupation, Extinction Rebellion Bristol held a peaceful gathering outside the City Hall: activists called on the Mayor to take action on the climate and offered their apologies for the disruption that this week of urgent protest has caused for the people of Bristol. Just outside the city, protesters hung a huge banner over the rush hour traffic calling for a halt to the expansion of Bristol Airport.

On the final day of the Uprising in Bristol, protesters gathered outside City Hall just after 1pm to pay tribute to those disrupted by the actions this week and to call on the Mayor to act now on the climate and ecological emergency. A choir sang a peaceful song and lay white roses outside the hall to make peace with the city and offer sincere apologies for the disruption.

Another highlight of the day was a large people’s assembly, which two police officers joined, discussing how everyone can work together to build a resilient future in the face of climate breakdown. This was a hugely constructive process, building bridges between communities.

Throughout the day, the 16 people arrested and detained from Wednesday’s action at the end of the M32 appeared at Bristol Magistrates’ Court. All are charged with obstruction of the highway, and all pleaded not guilty. Crowds of people, including the red rebels, gathered outside the Court to show solidarity.

“I am pleading not guilty to wilful obstruction of the highway as it’s my human right to protest and act in accordance with my conscience which is informed by sound scientific research such as IPCC report (2018). I felt compelled to take non-violent direct action as our Government has not taken action despite there being an ecological emergency and therefore they are failing to protect my children and grandchildren and causing them and us all serious harm.”

The day wasn’t without rebellion. During this morning’s rush hour in torrential rain, Extinction Rebellion activists hung enormous letters over the St Werburgh’s M32 bridge spelling out ‘NO AIRPORT EXPANSION’.

The protestors hope to stop Bristol Airport’s plans to expand the airport by 50%, which will add an extra 24,600 flights each year. The airport is also planning to create another 2,700 parking spaces on green belt land. The protestors are calling for Bristol Airport to publicly debate their plans so that the misleading data and polls they have released can be openly scrutinised.

The day will conclude with a thorough clear-up of the site, removing the roadblock on Bristol Bridge, taking down the temporary camp erected in Castle Park and clearing up any litter. Jeanette Kawas, the iconic pink boat, will leave Bristol Bridge.

At 5pm there was a multi-faith closing ceremony in a nearby church with Buddhist Monks, Church of England leaders and Jewish leaders who will be breaking bread, as well as Humanists and atheists giving readings. This was followed by a moment’s silence, a dance performance and a set from a 40 piece orchestra to conclude the week of action.

Today is the last day of the Leeds protest. Members of Extinction Rebellion Leeds packed up the encampment after 5 days of peaceful protests. The bridge has been cleaned of paint, rubbish, tents and belongings, returning it to a cleaner state than before the action.

In Bermondsey roughly 50 people, including many mothers, their children and Extinction Rebellion activists in solidarity, swarmed the entrance to Chambers Wharf where concrete is being poured by over 300 lorries over the next 3 days.

This is to supply construction of the Thames Tideway Tunnel or “Super Sewer,” a 25km concrete tunnel being constructed under the River Thames. It has a carbon footprint of 75,000 tCO2 and a £27 extra annual charge to all Londoners for the next 50 years.[1]

“I have 3 kids with asthma and respiratory problems I am worried about all the dust and pollution from the lorries, I am here to stop the lorries from coming, to protect our children.”

In the early afternoon protestors gathered outside Northcliffe House in London, headquarters of some of the UK’s largest newspapers – The Daily Mail, Independent, Mail on Sunday and Evening Standard – calling on the papers to tell the truth about the Climate and Ecological Emergency. During the peaceful protest, dubbed ‘Requiem for a Dead Planet’, activists gave speeches, performed Baroque Requiem music, a die-in and a eulogy was staged for the 400,000+ people who are dying from climate-related causes each year and mourn the devastating loss of wilderness and wild animal populations. Speeches were given by Caspar Hughes, Kathryn XR Youth, Bridget McKenzie, Stav / Poetry, Jon Fuller, Rianka XR Youth Devon, Jenny, Kofi and Donnachadh McCarthy.

Back in Central London, activists who had been camping at Waterloo Millenium Green left the boat, Polly Higgons, behind and marched to Parliament Square to join the school strikers and hold the final ceremony. They were joined by John McDonnell and Chris Packham who gave speeches in the Square.

For the past few days, we have been blocking the roads and causing disruption. We understand that this has led to real disruption – and we are genuinely sorry for the inconvenience this has caused in peoples’ lives. Not everyone will agree that this disruption is justified or necessary, but we truly believe it is. Our governments, at the local and UK level, have not taken the necessary actions to protect the millions of people being affected now, their future, the future of our children, and the future of the Earth.

Climate change and the current catastrophic loss of wildlife present a genuine threat to our civilisation which we must address immediately.

Currently we are locked into a path that is leading to terrible consequences. This is why we felt compelled to cause disruption in these cities this week. It is for ordinary people to step up to show our politicians and big corporations that rapid, radical change is required.

We have successfully blocked the streets because we care deeply about our countries and the world, and could see no other option to achieve this level of interest. Over just a few days of this bold action we have achieved mass public awareness and discussion, made numerous media headlines, and achieved the recruitment of many new people to Extinction Rebellion, who are committed to joining us in the next International Rebellion in the Autumn.

We thank the police, the council, local businesses, and the public for their support.