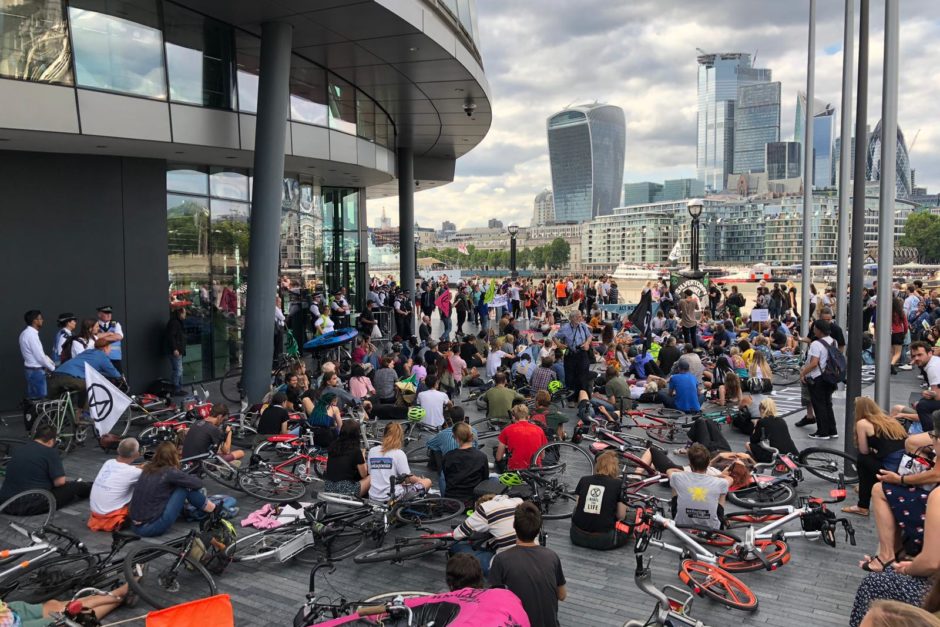 The Mayor of London declared a Climate Emergency in December, failure to act accordingly threatens the lives of millions of Londoners. This demands action…

Following the London Mayors declaration of climate emergency, Londoners are being asked to support a Tax Rebellion to demand action not rhetoric. Talks and feedback sessions will be held over the next six weeks to galvanise support for the Tax Rebellion.

As five cities unite in a Summer Uprising, Extinction Rebellion London will hold a public launch of the Tax Rebellion, assembling at 5pm on Thursday 18 July, in front of City Hall, where they will declare their intention to strike and convey their demands in a letter to the Mayor of London and the GLA. [1] Talks will be held on the tradition of tax strikes as a form of civil disobedience and demands for a greener, fairer London will be outlined.

Emma Wills, 35, Producer, who has pledged to take part in the Tax Rebellion said: “The GLA is using our money to fund construction, waste and transport projects that are making the climate crisis worse instead of better.

“The position of the Tax Rebellion is simple: we think that they should be spending our cash educating us – and that means a truly representative cross section of society not just the politically engaged – on the issues we are facing; enabling us to react to those issues swiftly and decisively with a legitimate public mandate so we can stop wasting time and get on with transforming this city into a world leader in biodiversity rehabilitation, carbon reduction policy and projects.”

The Tax Rebellion will continue until the GLA agrees to:

Unless the GLA agrees to meet our demands, the Tax Rebellion Fund will be used to finance a London Citizens’ Assembly to rewrite the 2020 London Plan into an Emergency London Plan, putting biodiversity, climate change resilience, and human wellbeing at the forefront of a strategy to achieve carbon neutrality by 2025.

[1] Letter to the Greater London Assembly

To the Mayor of London and members of the Greater London Authority (GLA) assembly,

You have said yourself, we are in a climate and ecological emergency. After meeting with you in April, we hoped you understood what this means; we saw your appeal to the central government to do more and the investment in the ULEZ scheme. Indeed we saw a clean, just and more beautiful London on the horizon.

The city of our dreams challenges the developed world’s march towards extinction, it does not profit from the destruction of nature, the deaths of millions in the majority world, it does not inflame the lungs of our children. This city of our dreams is the hope of a better world, it is shaped by all of its citizens, it cares for all its inhabitants, human and non-human, living or yet to be born. It is a city that stands up for life.

Whilst London’s most powerful authority raises a greedy, profit-driven, progress-blind machine, we will rebel. Our money will not support an institution complicit in ecological destruction in London and across the world.

That is why, over the next few months, we will not pay the GLA’s precept until you:

We believe in the importance of tax; it is our mutual investment in society. But your vision for London threatens our futures. If you fail to act on our demands, the funds withheld will be redirected to fund our own London-wide Citizen’s Assembly to design an Emergency London Plan. This would place biodiversity, climate change resilience, and human wellbeing for everyone at the forefront of a strategy to achieve carbon neutrality by 2025.

We fear for our lives and our children’s lives. We are left with no option but to disobey. We act now, in love and rage.

The GLA and the Mayor’s Office are responsible for London’s overall vision, air quality, spatial development and transport. The London Plan is the document that sets out the policy for these areas, directing the planning of London’s 33 councils. This makes it a key target for driving large-scale change across London, with a new version due for release in 2020.

If the GLA fails to address XR’s demands, the redirected tax funds shall be used to fund an impartial Citizens’ Assembly to draft an Emergency London Plan. More details on Citizens’ Assemblies, including how they are designed and run can be found here.

The GLA budget is partially raised through a ‘precept’ on council tax across the London boroughs. On average, 22% of Londoners’ council tax funds the GLA. It is this portion that London rebels are being asked to withhold and redirect to fund a London Citizens’ Assembly. The remit of this Citizens’ Assembly will be to re-write the London Plan into an Emergency London Plan commensurate with the reality of the Climate and Ecological Emergency, prioritising a socially just transition.

When 2,700 have pledged to join, the Tax Rebellion will start!

What is a tax strike?

Taxation underpins democracy – it is our mutual investment in society.  Refusing to pay tax has been used historically as an act of resistance against unjust leadership. For example: the Suffragettes’ “no vote, no tax”; the refusal to pay Thatcher’s poll tax; and salt tax resistance in colonial British India. There a clear historical precedent for what Extinction Rebellion are proposing. The ecocidal policies of the UK Government and the complicity of the Greater London Authority justify this peaceful act of civil disobedience.

More recently, tax rebellion has also been utilised by Rising Up, with the “Golden Rule Tax Disobedience” intending to mobilise people against systemic injustice. In addition, an Extinction Rebellion rebel, Imogen May, has refused to pay council tax to raise awareness of the need to use tax for sustainable projects.

Information about the three developments: