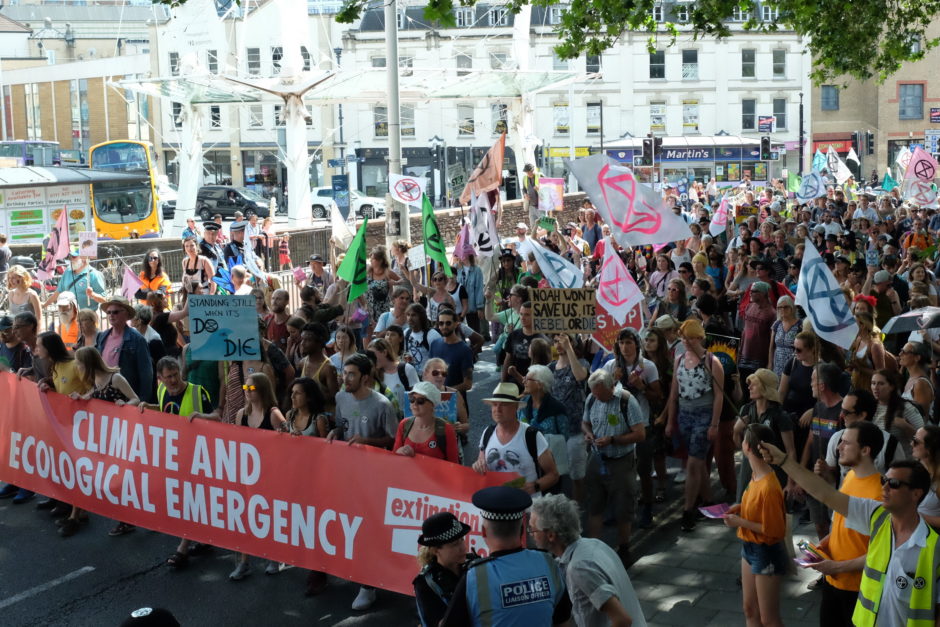 Over 1,000 rebels and a pink boat block Bristol Bridge in synchronised national action.

Over 1,000 rebels and a pink boat block Bristol Bridge in synchronised national action.

Yesterday at 08:00 AM a pink boat arrived at Bristol Bridge, shortly followed by some 1,000 Extinction Rebellion (XR) rebels, blocking vehicle access and intended to continue until Friday afternoon. The boat, which is named after the murdered Honduran environmental activist Jeannette Kawas, had been previously used by XR at Glastonbury Festival.

Joined by rebels from Southampton to Cornwall, the action represents the voice of local Extinction Rebellion across the whole South West, demanding the Government acts now to bring carbon emissions to net zero by 2025 and halt biodiversity loss.

A village of tents on Castle Park has sprung up with around 100 tents, a wellbeing area, information tent and a fully functioning kitchen serving three meals a day for the rebels.

As well as the blockade, a timetable of workshops, talks, activities was established. Music was amplified on a solar-powered sound system. Yesterday’s proceedings featured talks from co-founder Gail Bradbrook, 10-year old activist Elsie Lunar, a boat flotilla and peoples’ assembly.

Today’s timetable will feature a talk and gig from outspoken musician Billy Bragg, a demonstration from XR Youth and a non-violent escalation on College Green outside the City Hall. Billy Brag will begin his talk at 11am from the pink boat on Bristol Bridge and the procession to College Green will lead from there at 12pm.

On Monday afternoon, a spontaneous procession took 500 people on a march around the centre of Bristol, circling the bear pit, bringing traffic to a standstill. Despite the disruption, rebels were met with motorists tooting horns in support of the protest.

The day’s activities came to a close last night at around 10pm, and while local rebels returned home for the night, those who had travelled from further afield bedded down in Castle Park. Affinity groups tasked with holding the blockade through the night remained on Bristol Bridge until the morning. The timetable kicks off again this morning with a People’s Assembly at 9am.

This is part of a UK-wide synchronised Summer Uprising, also taking place in Glasgow, Leeds, London and Cardiff. There is more information here on what happened across the five cities here.

Follow the hashtags #SummerUprising #ActNow and #SeasRiseWeRise to see the Summer Uprising unfold in real time.

High quality images of the occupation will be available on request.