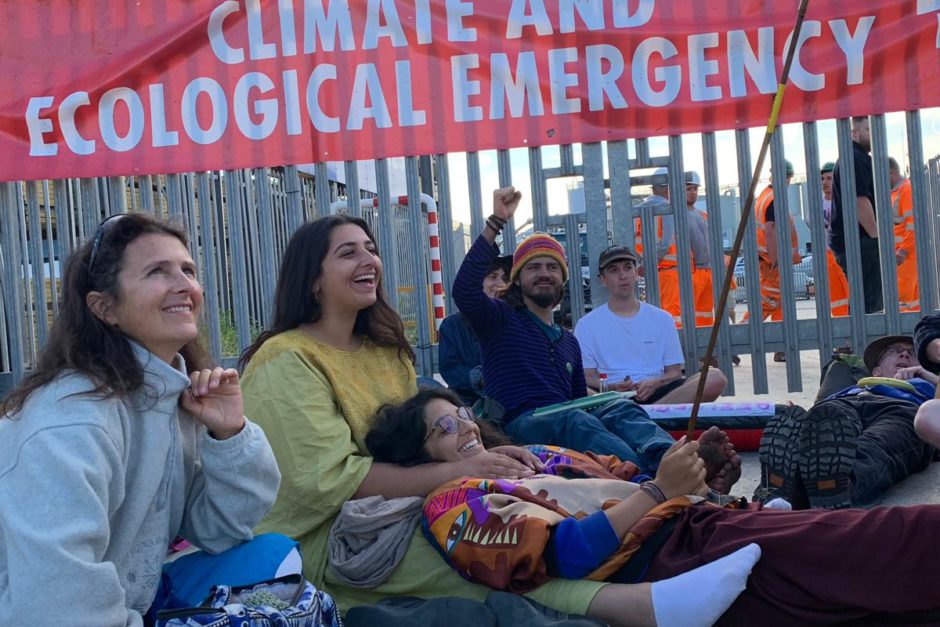 Members of Extinction Rebellion Tower Hamlets, Newham, Waltham Forest and Greenwich are currently blocking the entrance to the London Concrete works (E15 2PJ), near Pudding Mill Lane and by Stratford’s Olympic Park. Around 50 people, on both foot and bikes, with banners saying ‘The air that we grieve’, are surrounding the gates stopping any vehicles and workers from entering the site, with three people currently locked to iron pipes.

The group will nonviolently disrupt the site for the day in order to halt expansion of concrete works on the site which will supply major infrastructure projects in the area.

Tower Hamlets’ resident Morgan Trowland, 36, who is a structural engineer by profession and member of Extinction Rebellion, said: “I’m taking part in this action to disrupt concrete production, because we have to pause and recognise the harm it is causing both locally and globally; locally with the dust in the air our children breathe and globally with the inextricable CO2 emissions involved which are destroying the world.

“As a structural engineer, I’ve been designing concrete structures throughout my 15 year career: bridges, buildings, a stadium. It is one of the core skills of my craft, my livelihood. In regions of the world which are seismically inactive, many new concrete structures could be replaced with stone masonry; the Pont du Gard aqueduct bridge in France has stood for almost 2000 years and was built with a tiny fraction of the carbon emissions of an equivalent modern structure.”

As well as blocking the entrances to the site with their bodies, the group have invited speakers from the campaigning group Stop the Silvertown Tunnel Coalition and local school children from the Bobby Moore Academy. [1]

Luke Whiting, 23, a resident of Tower Hamlets who is part of Extinction Rebellion, said: “With children in East London already suffering illegal levels of air pollution, and suffering from stunted lungs as a result, it shocks me that the London Legacy Development Corporation is planning to expand a concrete works situated so close to schools – in order to build more roads! This is completely at odds with the immediate need to decarbonise our economy, and unfairly harms those with little voice already.”

Eleanor McAree, 25, from Extinction Rebellion Tower Hamlets said: “Concrete has a huge environmental impact and building another tunnel will only make air pollution across East London worse. The air pollution is already at dangerous levels and is affecting the health of children and adults in the area. With the siting of this industry right next to two schools, these children face lifelong negative impact on their health.”

In East London, residents are living under illegal amounts of air pollution and children are growing up with stunted lungs, while Government inaction on the climate and ecological emergency is pushing us all towards a catastrophic future. Despite this, the London authorities are moving ahead on a number of projects that will make the situation immeasurably worse.

The existing site for aggregate and spoil transfer is directly next to Bobby Moore Academy Primary & Secondary School. Residents and school children’s health are already being devastated, with recent scans showing their lungs to be inflamed because of the dust. [2]

Although the devastating effects of large scale concrete production in the middle of a residential area and next to two schools is already apparent, there are proposals to build a concrete plant on the site. The proposal will mean 520 HGV trucks going in and out of the site, past the school, on a daily basis.

Added to this, there is a massive conflict of interest with the chair (Sir Peter Hendry) of the London Legacy Development Committee, the committee in charge of developing the site, also being the chair of Network Rail (The Landowners).

There is already a huge residents campaign against the proposals by residents with petitions opposing the site getting more than 16,000 signatures and opposition from Assembly Members and Local Councillors.[3]

Concrete adds to the heat-island effect by absorbing the warmth of the sun and trapping gases from car exhausts and air-conditioner units.

It also worsens the problem of silicosis and other respiratory diseases. The dust from wind-blown stocks and mixers produces coarse particulates to choke local residents. Researchers found in 2015 that the air pollution index at all of the 19 biggest construction sites exceeded safe levels by at least 3 times.

It is also devastating for biodiversity and plays a significant role in the climate catastrophe we face. [4]

We incorrectly included a reference in our original press release that London Concrete is a confirmed supplier of the Silvertown Tunnel construction. We apologise for any inconvenience caused.

Our press release was intended to draw attention to the proposed expansion of concrete works on the site, which will supply major infrastructure projects in the area, and the devastating health impact this will have on local residents. Parents of the local school and other members of the community are understandably distressed at the prospect of 520 HGV vehicles going past the school on a daily basis. Many of whom were out in support of our actions today.

Today was also an opportunity to stand shoulder-to-shoulder with Stop the Silvertown Tunnel Coalition, in opposing the project.