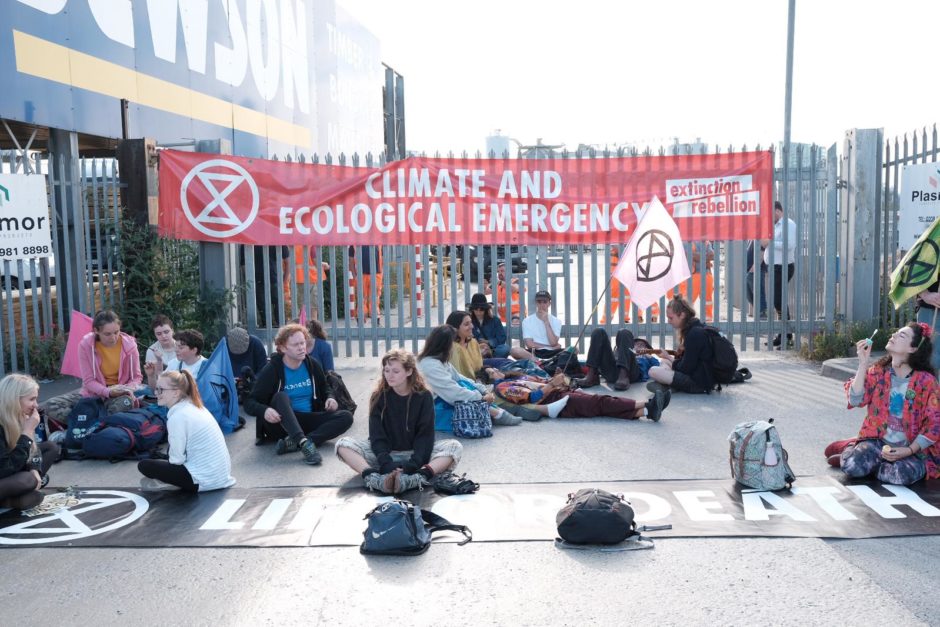 Yesterday thousands of people joined Extinction Rebellion across Bristol, Cardiff, Glasgow, Leeds and London – as part of Extinction Rebellion’s Summer Uprising. They sang, drummed, talked, and peacefully disrupted streets calling on the government to Act Now to halt biodiversity loss and reduce carbon emissions to net zero by 2025. Five iconic boats named after climate protectors from around the world stood as beacons of hope as a peaceful day of action got underway.

Day two of the Summer Uprising upped the ante with Bristol, Cardiff, Leeds and London holding pop-up protests across the four remaining cities. Activists brought London Concrete in East London to a close for several hours, bridge blockings took place in Bristol and Leeds, and ‘die-ins’ in Cardiff were held on the steps of the Welsh Assembly.

Tuesday was the beginning of Bristol’s Extinction Rebellion Youth camping on College Green. The day kicked off with a talk from Billy Bragg, who shared rousing words with rebels in the morning from the pink boat – named after murdered environmental activist, Jeanette Kawas – on Bristol Bridge, describing the rich history of activism that Extinction Rebellion is now part of. A samba band then led a procession to College Green outside Bristol Council House, disrupting traffic on some of the busiest roads in Bristol. Rebels then heard from an inspiring line-up of Extinction Rebellion youth members, including 13-year-old Grace and 10-year-old Elsie, who encouraged other young people to join the rebellion.

Later in the day Bristol Council converged at the Council House to hear from Marvin Rees, the Mayor of Bristol on his response to the climate emergency, which is to set a target for Bristol to go carbon neutral by 2030. Rebels greeted councillors on their way into the meeting.

“I’ve had a great day talking to kids, trying to recruit more people, saying come and join us. We really want to get more kids involved and then we want to do actions with other kids from across the country.”

This afternoon members of Machynlleth and Aberystwyth Extinction Rebellion groups cycled to the Welsh Assembly in the bay, wearing animal masks, before performing a ‘die in’ on the steps of the legislative building to represent the annihilation of wildlife from human impacts.

Two members went into the Assembly building with hand-crafted gifts made from Welsh felt for key Assembly Members shaped in the form of our planet with a note saying “Please look after this Earth”.

Elsewhere in Cardiff, spirits remain high for the second day of the roadblock outside the castle with members of the public coming forward to share their support and good wishes. Many people taking part are taking time off work to sign up and join in with the protests.

Ariana Jordão, Biologist, 34
“We hope that these actions encourage our elected leaders to look after the planet and address the 6th mass extinction, by bringing in urgent policies to halt biodiversity loss in Wales and beyond by 2025”

In Leeds, rebels have held Victoria Bridge overnight by occupying an encampment on the public highway. A night of music, art, workshops, and Peoples’ Assemblies have instilled a spirit of hope and solidarity. The yellow boat, painted with the messages of PLANET BEFORE PROFIT and ACT NOW, remains in place on the highway, drawing attention to the role of the finance industry in the climate emergency. Around 200 protesters are gathered on the bridge, with one local business turning up in support to provide delicious meals.

Rebels have also been offering food to passers-by during lunch time, in an act of sharing and engagement.  Some residents and commuters have been expressing their annoyance at the action, however Extinction Rebellion have issued a social media statement saying:

“We understand that the current action on Victoria Bridge has caused a lot of disruption in the city, and that many people are unhappy about this tactic. Please understand that we are using this localised disruption to draw attention to the much more catastrophic disruption that will be caused by massive climate breakdown. We invite anyone who does not agree with our tactics to engage in an open and respectful dialogue with us.”

Olympic gold medal winning canoeist Etienne Stott has also been part of the Leeds action, turning up to show his support alongside local rebels.

Protesters in Leeds have echoed the top line demands for the government to TELL THE TRUTH  and to ACT NOW, with particular focus on the role of the finance industry’s continued investment in fossil fuel companies. The local group have emphasised that the finance industry could in fact be part of the solution, by putting planet before profit, and investing in renewable energy, for the future of humanity.

“I’m involved in Extinction Rebellion’s Summer Uprising because I’m anxious for our future. The climate crisis is already here with many suffering from the increased frequency of wildfires and extreme weather. We need to act now but individuals can only do so much. It is essential that institutions like banks also play their part by divesting from fossil fuels and investing in solutions to the climate crisis. I’m hoping to push for this by disrupting the roads into Leeds’s financial centre today.”

Early this morning about fifty rebels valiantly blocked the entrance to London Concrete, Bow, East London, in an attempt to halt works for the day and demand the expansion across the sites in the area be stopped. Cement is responsible for about 8% of the world’s carbon dioxide emissions.[1] 7 people were arrested as they peacefully protested and blocked the gates.

Eleanor McAree, 25, from Extinction Rebellion Tower Hamlets, said: “Concrete has a huge environmental impact and building another tunnel will only make air pollution across East London worse. The air pollution is already at dangerous levels and is affecting the health of children and adults in the area. With the siting of this industry right next to two schools, these children face lifelong negative impacts on their health.”

As action continues on Wednesday, a Critical Mass of cyclists will be riding on Hammersmith Town Hall, starting out near Millenium Park, Waterloo from 4pm. They will cycle through Kensington and Chelsea along the proposed (highly opposed) cycle lane route to Hammersmith and Fulham town hall in time for the climate emergency council meeting, where rebels will demand that the council declare a climate emergency and support the new cycle lane proposals. [3]