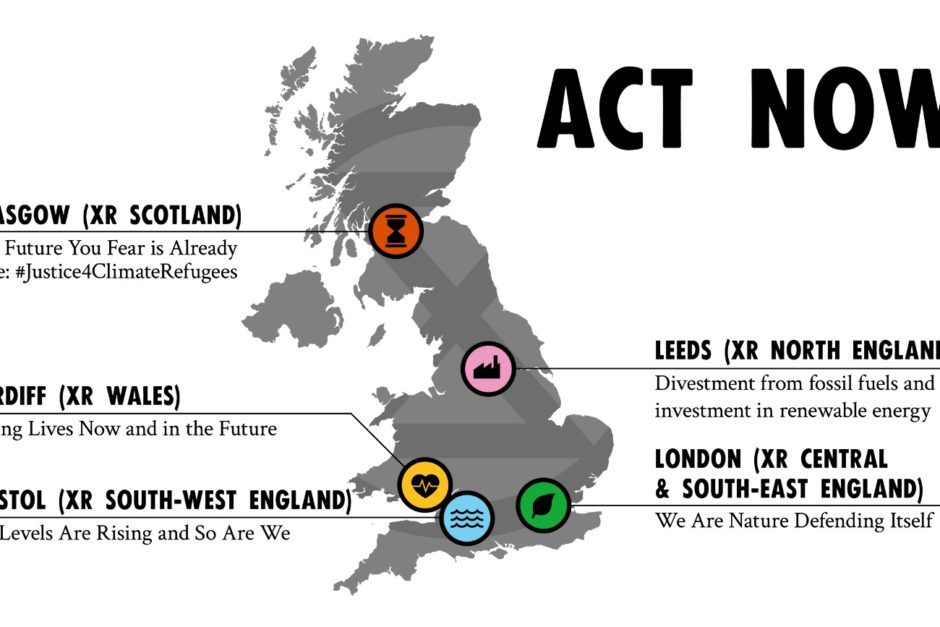 The Summer Uprising is here…

TODAY from 9AM, Extinction Rebellion’s Summer Uprising begins today across 5 UK cities – Bristol, Cardiff, Glasgow, Leeds and London. This emergency mobilisation of ordinary citizens, driven to action by the threat of climate breakdown and ecological collapse, will demand the government take immediate action to halt biodiversity loss and reduce greenhouse gases to net zero by 2025.

Through a host of non-violent protests, communities around the UK will be coming together to stage a series of creative acts of civil-disobedience – blocking specific locations, bridges and roads – while also holding talks, workshops, trainings, family friendly activities, peoples’ assemblies and more.

Last spring thousands gathered in cities around the world in beautiful, united resistance, marking the beginning of our first International Rebellion against criminal Government inaction on the climate and ecological emergency.

The Berta Cáceres, a pink boat named after the Honduran environmental activist and indigenous leader murdered in 2016, took centre stage in Oxford Circus with our first demand TELL THE TRUTH emblazoned on its side.

Today, there will not just be one boat blocking streets and raising the alarm. There will be five, one for each city taking part, as our movement grows stronger and people begin taking action in their communities. Each boat – now a recognisable symbol of rebellion and human survival – will bear the words of our second demand – ACT NOW – and each will be named after a climate activist, either living or passed, who have risked everything in defence of the future of our planet:

We invite everyone to make their way to their nearest city and join us:

In Bristol more than 22,300 homes are threatened with flooding if oceans continue to rise…

WHAT: Over 1,200 people from South West England will be converging on Bristol for five days of action. Rebels will disrupt multiple sites in the city for five days, starting with Bristol Bridge on Monday morning. The protest will peacefully escalate on Tuesday to disrupt Bristol Council, where Extinction Rebellion Youth will hold College Green. Wednesday will feature a Critical Mass Bike Ride, which will visit the five areas of the city with the worst air pollution. Extinction Rebellion Bristol will be encouraging people to consider the effects on their lives of droughts, storms and rising water. There will also be music, workshops, peoples’ assemblies, actions, and solutions zones.

“We are facing the sixth mass extinction. To save the futures of myself and those I love and care about, I will be taking to the streets in protest this week. For too long the youth have been denied a voice in politics and I will not stop until this changes. If there was one thing I could say to our government it would be: Act Now. Our lives are in your hands.”

A mass extinction event, only the sixth in roughly 540 million years, is underway…

WHAT: Cardiff will be transformed by the arrival of concerned citizens from across Wales who are determined to highlight the need for the Welsh Government to dramatically accelerate its actions in tackling the climate crisis and ecological emergency. Meeting outside the Cardiff National Museum, rebels will disrupt central space in Cardiff dressed in yellow to represent the dead canaries coal miners used as an advanced warning of danger. The Uprising in Cardiff will also feature live music, poetry and spoken word, peoples’ assemblies, storytelling and talks.

“Wales is a rural country which is already suffering the effects of climate breakdown. In Carmarthen, where I live, we suffered a massive flood last October, we have never seen anything like it before. Out of a population of about 10,000, 100 were displaced or made homeless. Some of these people have been rehomed, but some still have no home. This has affected people on low incomes the most as there are no more houses available for them. Also there are some businesses who have not yet managed to reopen, maybe they never will.

“To me this is an issue about my children’s future but also about equality, it is always the poorest people who suffer most from climate related disasters. I want the government to do something about it now, not wait for more disasters and more people to suffer.”

“Tens of millions of people will be forced from their homes by climate change in the next decade, creating the biggest refugee crisis the world has ever seen…” – The Guardian

WHERE: Trongate
WHEN: Monday 15 July, 8AM
WHAT:  The Uprising in Glasgow will kick off on Monday with rebels from across Scotland standing in solidarity with climate refugees. They will highlight the reality that millions of people in the Global South/Majority World are already living: floods, hurricanes, food shortages, droughts and resulting conflicts. The future effects of the Climate and Ecological Emergency that we in the UK are terrified about are not distant threats: all around the world people are already being displaced and dying. Glasgow will also have family-friendly activities with Wee Rebellion as well as live music, a ceilidh, speakers on climate justice and refugee solidarity.

WHERE: Leeds City Square
WHEN: Monday 15 July, 10AM
WHAT:  Rebels from across the North of England will cause disruption in the heart of Leeds’ financial district, which is the biggest and fastest growing outside London, drawing attention to the links between banking and the climate and ecological emergency. Rebels will demand that the finance industry changes course to be on the right side of history, and invest in renewable energy and green solutions, rather than adding fuel to the fire. As well as disruption, the Leeds group have music, performers and talks planned.

“As a parent with young children, I’m deeply scared about the kind of future our kids will inherit. It feels like we’ve had decades of everyone waiting for someone else to do something about climate change – now we’re out of time and can all see the signs of climate breakdown all around us. I’m involved in Extinction Rebellion because I want government, big banks and businesses to recognise that this is an emergency and act now.”

We Are Nature Defending Itself: London (Extinction Rebellion South-East England and National)

When government and the law fail to provide any adequate protection of and security of its people’s well-being, it becomes not only our right, but our sacred duty to rebel…

WHERE: Royal Courts of Justice, The Strand, London

WHAT:  People will be gathering outside the Royal Courts of Justice to demand the legal system take responsibility in this crisis, and ensure the safety of future generations by making ecocide law. We also stand in solidarity with climate activists around the world who are sacrificing their freedom to fight for climate justice. This protest comes as the courts in the UK gear up to prosecute over 1000 people who were arrested during our International Rebellion in April. We are calling on the Met and Crown Prosecution Service to drop all prosecutions.

“I was arrested during the International Rebellion in April because it is so important to stand up and challenge a government who is not even performing its primary function of providing our security for the future. I therefore believe we have a duty to engage in civil disobedience to promote the need for action now for climate and ecological justice. And yet the government may want to prosecute me for taking a stand to protect our future.”

Time is running out to take action on the climate and ecological crisis we are in so the faster we act the better. We are already too late to prevent massive destruction and loss of life.

Climate-breakdown-induced droughts, floods, wildfires, typhoons and cyclones are already destroying communities and killing people all over the world. The question now is whether we can act in time to limit the damage – and hopefully avoid a runaway warming that could result in human extinction.

We invite all to join us for this Uprising and demand the Government take immediate action on the Climate and Ecological Emergency. Because we don’t just need the Government to act; We need everyone to act. If this is going to work we need every principled and peaceful citizen to rise with us.

For our children, for yours: ACT NOW!

Parliament has announced a climate emergency, but the government is not taking the necessary decisive actions required by the crisis. Their 2050 net zero target is an alarmingly insufficient response for halting climate breakdown and biodiversity loss. By then it will be too late.

Our current ecocidal economic system rewards the exploitation of people and planet. Our house is on fire. Politicians are ignoring the science as they encourage airport expansions, HS2, fracking, oil drilling and exploration while putting billions into new roads and subsidising investment into fossil fuels. Meanwhile, they block onshore wind installations and tax sustainable alternatives, but refuse to put ecocide into law.

It is only by thinking big, by adopting meaningful measures to reduce carbon emissions to net zero by 2025, protecting biodiversity, and making ecocide law, that the Government can show itself to be on the right side of history.

In line with the urgency of reports from the IPCC and IPBES, we remind the Government of the need to ACT NOW. If the United Kingdom, birthplace of the industrial revolution, can show leadership, the resulting chain reaction across the world will be crucial for securing the future.

A significant underlying motivation for this national action is the flawed Citizens Assembly announced by six select committees of the House of Commons, and the way in which government is continuing with business as usual, enabling corporations to profit from exploiting people and planet despite Parliament declaring a climate and ecological emergency.[6]