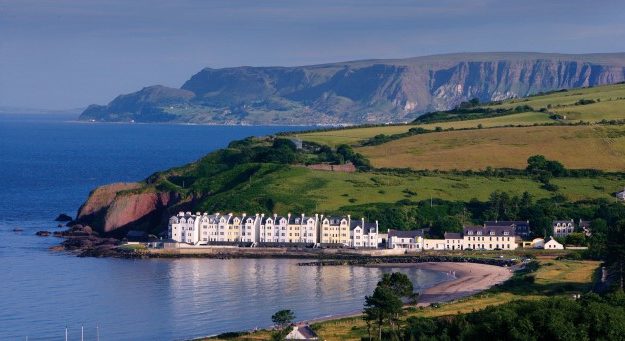 This week, we caught up with XR Northern Ireland, a relatively new group set up during the International Rebellion of April 2019. Here is a snapshot of XRNI’s experiences so far: their enthusiasm, creativity, deep concern for the environment and love for fellow human beings, all coloured by the intensity of NI politics and the realities of corporate assault on one of the least protected environments in the UK and Ireland.

“Our first day of action was during the International Rebellion. At the time, we just wanted to contribute to what was going on in London and across the UK, and raise awareness of arrests around England.

The day was really fun. We set up a table and offered painting and banner-making – there was a ‘No Planet B’ banner – free food, circus performers, a band. We were asking people to sign a petition for Belfast City Council to declare a climate emergency.

The aim that day was to create a spectacle, show people what we’re about and connect with people. We gathered email addresses of participants, invited people to be involved in the campaign and come to an open meeting. This was very fruitful because many people were not on Facebook and only used email.

Overall, the response of the public was good and many people admitted they might be ready to take action.

Fossil-free Northern Ireland joined our first event as well. Three weeks later, we held our first open meeting to introduce new members to XR, its aims and principles, and see what everyone wanted to do. Using the participatory ‘World Café’ tool, we generated ideas of what our working groups should be. People were very engaged and left feeling enthused.

Since then, we’ve been busy setting up working groups: Art, Action and Logistics, Regen and Wellbeing, Social Media and Communications, and Community Engagement. One of these groups has already met face-to-face and others have made plans to meet in the near future.

We’ve also organised various actions, including a Critical Mass bike ride. We cycled really slowly through Belfast with a boom box, tall bikes, as if to say: ‘Hey, XR are in town!’ It was a lot of fun and left us feeling really energised. We stopped in the centre of town and had speakers from various environmental groups: Save our Sperrins, Chris Murphy the A6 campaigner, Friends of the Earth, the Green Party, People before Profit, XR; and anyone who wanted to speak was invited to do so.

Again, we had music – the Belfast Busking Band came along and performed – there was free food, petitions, dancing, and we were just going around talking to people about. We were asking people to sign petitions for Belfast City Council to declare a Climate Emergency. Our numbers are still small but we are growing. We’ve certainly had a lot of interest: during the day of action, one visitor from the US approached us, asking if XR was also in the USA – if not, he said, he would start his own XR group back home!”

Alerting people to the crisis on their doorstep

With no independent Environmental Protection Agency, the natural environment in NI is particularly vulnerable. Neither Areas of Outstanding Beauty (such as the Sperrin mountain range) nor Sites of Special Scientific Interest (such as the richly biodiverse Ring of Gullion) are safe from corporate exploitation.

Communities have often had little say in decisions affecting their natural environment, and few are even aware of the plans to further open up NI for mining and drilling by international corporations.

An important part of the work of XRNI has been to raise awareness of the environmental crises on their doorstep:

“We were hitting people with the facts. People were shocked when we presented plans by international corporations for gold mining and oil and gas exploitation in NI. During the presentation by a campaign group on gold mining in the Sperrin mountain range, people couldn’t believe this was happening in their area. The response was: ‘Are you joking?’

Nearly one third of the landmass of NI is earmarked for natural resource exploitation. Many areas are beloved by locals and have long attracted visitors because of their beauty. People could not believe what they were hearing and soon turned to: ‘What are we going to do about this?’

On 22 June, we held a solidarity day of action. XR rebels and other activists headed to the Tourist Office in Belfast and handed out leaflets showing the Hills before and after the planned mining.

One rebel came up with the idea of ‘Ten places to visit in NI before they are drilled or mined’ and we handed out leaflets to people showing this. We also did another critical mass bike ride, because it was so successful the first time and people were so energised by it, and we picketed the Tourist Office.

Some of us were dressed as Leprechauns and others were dress up in suits and pretended to be chasing us for our gold. It was fun as well as a great photo opportunity.”

One of the key considerations for XRNI has been to try to work in solidarity with other environmental groups campaigning in NI.

“We’ve been signing their petitions, objection letters and so on; with so much amazing work being done by these other environmental groups, we don’t want to reinvent the wheel.

We have also actively been learning from them: for example, we approached the campaign group Cooperate Against Mining in Omagh (CAMIO), and they shared important resources with us.

Another group, Fossil Free Northern Ireland, showed us various ways of being active and what could be done. We benefited from Friends of the Earth’s longer experience with activism too, by taking part in their frontline defenders training on the security aspects of actions.

We have felt that solidarity among environmental groups is important as a way to offer support, since some activists in NI have received death threats and been harassed by corporations. Thankfully, XR actions have not attracted such unwelcome attention to date.”

In turn, XRNI has been contributing to the overall environmental movement in NI through extending activism to a broader demographic.

“In NI, environmental activism has tended to attract older or retired people, whereas XR has really brought to forefront the idea that people of all ages can get involved.

The public meeting in West Belfast on 26 June was organised by People before Profit against oil drilling in the Belfast Hills. There were three speakers: Lynda Sullivan from Friends of the Earth, Councillor Gerry Carroll from People Before Profit, and Lorraine Montague from XR. All three speakers are also current members of XR, which does a lot to bring people together.

The turnout was fantastic, with over 50 people from various campaign groups taking part, knocking on people’s doors in West Belfast and eventually staging a protest outside the Department for the Economy. The event was well covered by the press.”

The public meeting highlights another one of XRNI’s priorities: inclusiveness.

“In the public meeting, People before Profit specifically asked for a female speaker from XR for gender balance. In general though, XRNI have been clear that we don’t want to reproduce inequalities in society and actively want to reach out to communities, LGBT, ethnic minorities, people with disabilities, and more.

We have made a conscious effort to be inclusive and to consider the accessibility needs of people attending our meetings or rallies. ‘Community engagement’ is one of the five working groups that we have set up.”

A final challenge for the budding XRNI is the context of long-standing divisions. In particular, the Green-Orange division from decades of political violence.

“We made clear to people coming to open meetings that we don’t have space for Green and Orange politics. This space is for everyone, we don’t care who you vote for. Everyone is welcome.”

“So far, our work at XRNI has very much been about community building across a whole range of societal divisions related to age, gender, sexuality, politics, ethnic and cultural background.

XRNI has been about looking after each other, coming together, connecting. When we’ve said that to people, that’s when they really want to be involved.

Our laws do not protect the land. Unlike the rest of the UK, we lack an Independent Environmental Agency to offer any protection. Governmental departments and politicians hold the power in decision-making that affects our environment.

As we have seen, it’s money over the environment, every time.”

In Northern Ireland, as elsewhere, it’s time to ACT NOW.

On the current mining boom in NI

On oil and gas drilling in the Belfast Hills