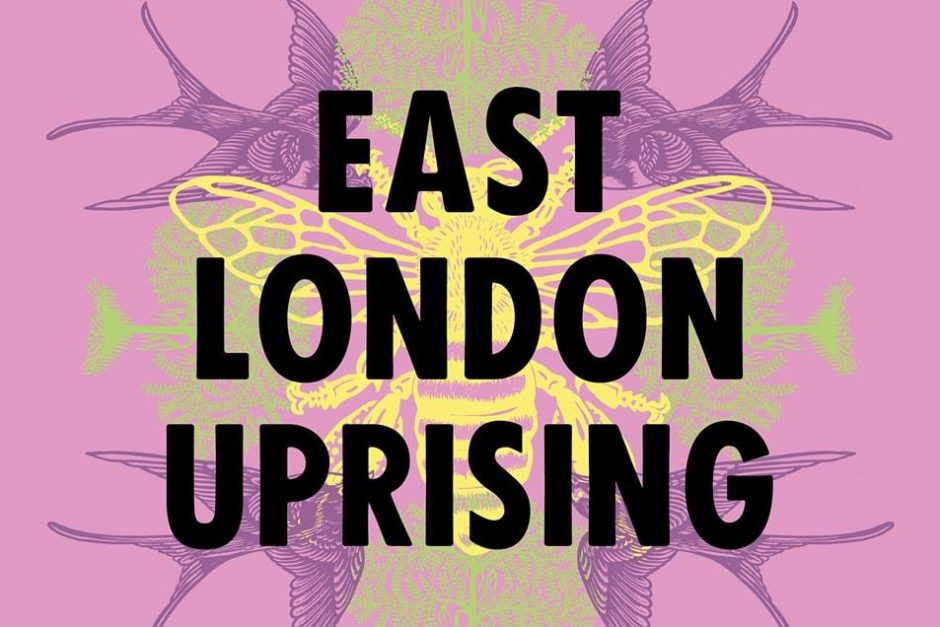 Extinction Rebellion groups from across East London have come together for a major East London Uprising from 12-14 July 2019, and are calling on Londoners to take part. The Uprising will feature a mix of arts, music, talks, workshops, and non-violent direct action across various East London locations (full programme below).

The three days of protest and creativity are set to launch the Summer Uprising, a series of coordinated regional protests taking place from Monday 15 July in five cities across the UK – Bristol, Cardiff, Glasgow, Leeds and London.[1]

As part of the East London Uprising, Extinction Rebellion is demanding that councils make major changes to protect their citizens from ecological collapse and contribute to averting a climate catastrophe. Groups from Hackney, Tower Hamlets, Havering, Newham and Waltham Forest are calling for local councils to:

Uprising organiser Sam Smithson said: “This Uprising will ring the alarm on the need for urgent action over the climate crisis while also celebrating this wonderful, diverse part of London and the people who live within it. It will show that another future is possible for both ourselves and our children.”

“From musical performances, families’ activities and a skeleton procession to recycling workshops, science talks and training in climate activism, there will be something for everyone. It will be an inclusive and participatory event, with lots of ways in which people from East London communities can get involved.”

Following a week after London Climate Action Week, the Uprising takes place in locations including London Fields and Extinction Rebellion’s own ‘Garden of Earthly Delights’ on Graham Road, Hackney.

The Uprising there will also include a People’s Assembly outside Hackney Town Hall, allowing East Londoners to discuss their concerns about the climate crisis and ways to address it.

Simon Mercer, of Extinction Rebellion Hackney’s political unit, said:  “We care deeply about our futures and those of the next generation. This is what drives us to push the boroughs of East London to be the greenest in the country and to set the benchmark nationally. This Uprising is part of the push.

“By putting pressure on the councils to divest from fossil fuels, introduce policies to drastically reduce emissions and to radically cut the use of plastics throughout the boroughs, we genuinely have a chance to make a change for all our futures.”

In May, the Hackney-based families group from Extinction Rebellion staged a ‘die-in’ at Hackney Town Hall to demand that the council stop using glyphosate weedkiller in parks, playgrounds and roadside amid concerns over its impact on the public and the environment.

“We hope that with every decision the boroughs make they will address and communicate the potential impact on climate and biodiversity,” added Mercer.

In response to Extinction Rebellion’s demonstrations in April, the UK Parliament declared a Climate and Environment Emergency, and six Government select committees jointly announced plans to create a Citizens’ Assembly on Climate and Ecological Justice.[2]

However, while  important steps, the declaration has no binding force on the Government and legislation, and the Citizen’s Assembly would also be advisory.

Sam Knights, Extinction Rebellion Political Strategy Team, said “These initial steps by parliament are welcome but do not go anywhere near far enough. It’s easy for the government to pay lip service to caring about climate change but we need to see concrete action, and see it now.”

The government, meanwhile, has failed to agree to Extinction Rebellion’s third demand to reduce greenhouse gas emissions to net zero by 2025.

“All the science points to the fact we’re staring in the face of climate disaster,” added Knights.  “Unless we set concrete targets, the words of politicians are meaningless.”

“Grassroots events like the East London Uprising show that we will not step down and be silent – we’re building momentum and our calls for change will only grow louder.”

From 3.30pm – The family-friendly The Air We Grieve March calls for action on air pollution. Schools, local people and politicians will assemble at Paradise Gardens by Bethnal Green Tube Station before marching to Hackney Town Hall, where a Children’s Assembly will be held.