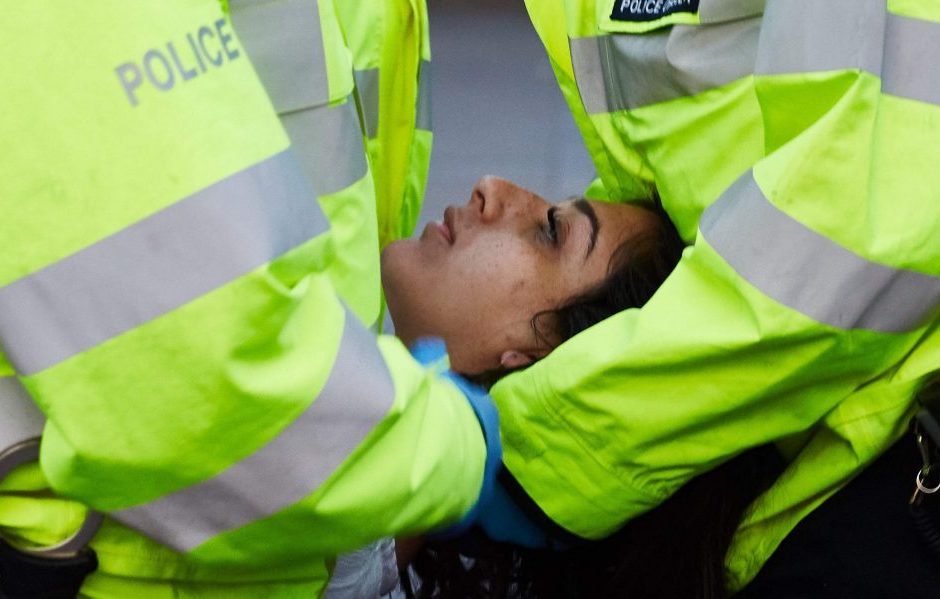 More than 1,100 qualified medical doctors have come out in support of non-violent direct action as they warn of the mental and physical health damage caused by looming climate and ecological disaster.

In an open letter signed by 1,147 doctors, they argue that the present policies and responses to the climate and ecological emergency are woefully inadequate.

The letter states that: “As caring professionals we cannot countenance current policies which push the world’s most vulnerable towards progressive environmental catastrophe.”

It goes on to say: “Governments abrogate their responsibility when pursuing grossly inadequate policies that risk environmental collapse. Non-violent direct action then becomes the reasonable choice for responsible individuals.”

The number of doctors willing to support non-violent direct action may come as a surprise given it is a profession viewed by some as traditionally more cautious and conventional than others. The letter demonstrates the depth of frustration, helplessness and anxiety shown by increasing numbers of people from all backgrounds as we drift towards extinction.

Extinction Rebellion has welcomed the willingness shown by the UK government to address the issue but as the letter states the policies are still woefully inadequate to make a real difference to humanity. The current political system supports short term solutions which favour politicians’ legacies. We want to support politicians to express their true feelings about the situation and take meaningful action. One way they can do this is to pass on the decisions to a citizens’ assembly to enable climate and ecological justice.

Dr Bing Jones, a retired associate specialist in haematology, who has spearheaded the doctors’ campaign, said: “I was scared and frustrated by our apparent paralysis to act in the face of a climate and ecological disaster. More than 1,100 medical professionals speaking out in favour like this has the potential to influence policy and I urge more to come forward to support us.”

Dr Alex Armitage, a Paediatric Registrar and one of the signatories, said: “Climate and ecological breakdown is the biggest threat to public health and the government is failing to take action to protect us. Extinction Rebellion’s non-violent civil disobedience is an evidence based, public health intervention that works.”

Professor David Pencheon, Honorary Professor of Health and Sustainable Development, University of Exeter, said: “Working as a health professional for 40 years, the scientific and empirical evidence is clear. Climate and environmental breakdown with plummeting levels of biodiversity are the biggest health threats we face. All that makes life worth living is at severe risk. The solutions need to be bold and quick – they will bring both immediate and long term benefits to all living systems including human beings.”

About Extinction Rebellion
Time has almost entirely run out to address the ecological crisis which is upon us, including the 6th mass species extinction, global pollution, and abrupt, runaway climate change. Societal collapse and mass death are seen as inevitable by scientists and other credible voices, with human extinction also a possibility, if rapid action is not taken.

Doctors and the Cancer of Climate Change. An open letter endorsing Non Violent Direct Action:
We the undersigned are qualified medical doctors. We are united by our distress at the world’s minimal response to looming environmental disaster, ignoring the early signs of a malignant process. We sympathise with current widespread protest, notably by children who will be the most affected. Peaceful protest can change society. We urge government and media to respond immediately and proportionately.

As scientists we hear the warnings of worldwide bodies including the IPCC, NASA , WWF and WHO becoming increasingly urgent, emotive and united. As caring professionals we cannot countenance current policies which push the world’s most vulnerable now, and all our children in the future, towards progressive environmental catastrophe. It is unethical to fail to adequately inform the public as carbon emissions continue to rise, societies and habitats are destroyed and the risk of irreversible damage increases.

We are particularly alarmed by the inevitable effects of rising temperatures on health: the Lancet’s “ biggest global health threat of the 21st century”. We  observe escalating extreme weather events, spread of infection, loss of productive land and massive flooding of low-lying areas. We heed predictions of societal collapse and consequent mass migration, both worldwide and within countries. Such societal collapse risks damage to physical and mental health on an unprecedented scale.

We acknowledge the challenge of transforming consumerist, fossil-fuelled economies into those that enable environmentally and socially sustainable societies. But we celebrate the opportunities such changes will bring, creating a kinder, more equitable and more sustainable world. There is hope. Tackling climate change “could be the greatest global opportunity of the 21st century”- the Lancet again. Urgent radical action will mitigate the inevitable environmental damage. But delay massively increases the cost of mitigation and risks irreversible progression of this global pathology.

Present policies and responses are woefully inadequate. The IPCC warns that we have only 11 years to halve global emissions (and then reach net zero by 2050) to meet their 1.5C target, yet last year our global emissions rose yet again. It will be a massive task to avoid catastrophic warming and we need radical action now. Our unchecked consumption, dependence on fossil fuels and decimation of ecosystems continue. The diagnosis is clear and the treatment urgent. Yet politicians prevaricate and global emissions still rise. What chance do we have to meet the IPCC target if we delay?

Governments abrogate their responsibility when they pursue grossly inadequate policies that risk environmental collapse. Non Violent Direct Action then becomes the reasonable choice for responsible individuals. History, evidence and recent events demonstrate the effectiveness of persistent, peaceful protest. The method enables the media in publicising this complex but vital message.

We therefore support the following key demands which parallel those made by the Extinction Rebellion movement: