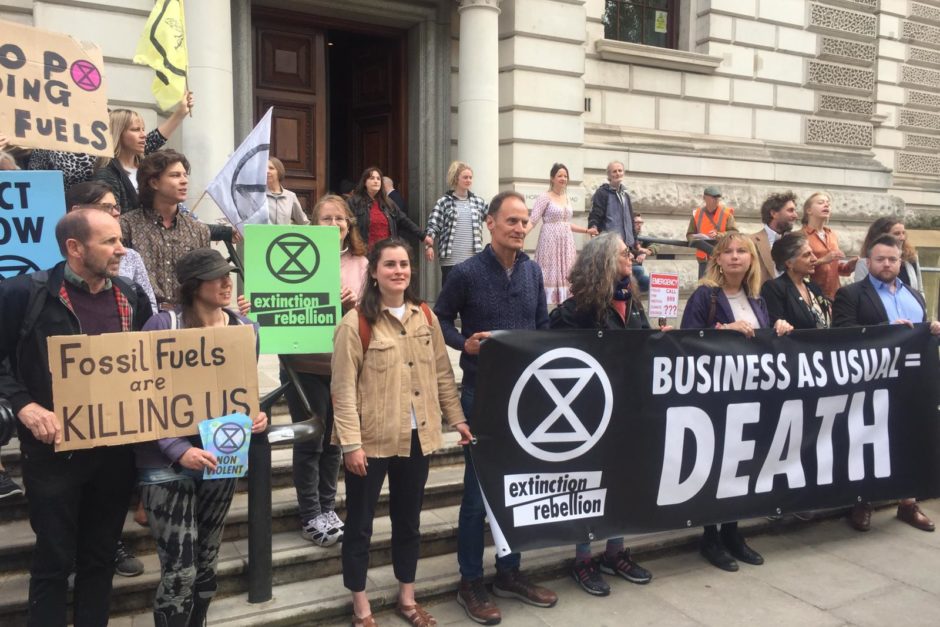 UPDATE: Extinction Rebellion takes it to the Treasury – where mitigation efforts against climate change go to die

In another act of truth telling, today 7 Extinction Rebellion activists glued on to each other in front of HM Treasury – with a banner which says ‘Business as Usual = Death’ – to highlight the role the Treasury plays in worsening climate change and ecological breakdown.

Currently the government supports fossil fuels with over £10 billion of taxpayers money, significantly more than the £7 billion spent on renewables. [1] Despite the government’s pledges in the 2019 Spring Statement regarding “clean growth”, the UK still has the largest fossil fuel subsidies in the EU.

Extinction Rebellion demands that HM Treasury tells the truth about their role in funding climate catastrophe with taxpayers’ money, and further, transfers all pubic spending on fossil fuel subsidies to support a just transition that aids the rapid decarbonisation of our country’s economy.

We know that national policy can be shaped by the decisions made inside this department and that many initiatives are either funded or shut down here.

Fossil fuels enabled the UK to open the industrial revolution. Extinction Rebellion are asking the Government to enable our country to show true leadership in light of the disaster they have caused, to recognise the urgent need for restoration of our ecosystems and to make our planet liveable for not only future generations, but also this generation.

Andrew Medhurst, a member of Extinction Rebellion who has worked for many of the largest companies in the UK financial sector states: “All businesses have to pick which side of history they want to be on: do they facilitate the end of all we hold dear in the natural world, possibly even ourselves, or help to accelerate the transition to carbon-zero economies by rejecting further support for fossil fuel companies?”

Earlier this week, Mark Carney, the Governor of the Bank of England, said: “The enormous human and financial costs of climate change are having a devastating effect on our collective wellbeing.”

With the race to appoint his successor starting this week, the Government has the opportunity to put the climate emergency at the heart of government financial policy.

It is time for a new economics that reflects the reality we live in. The point of the economy is to secure life on earth.