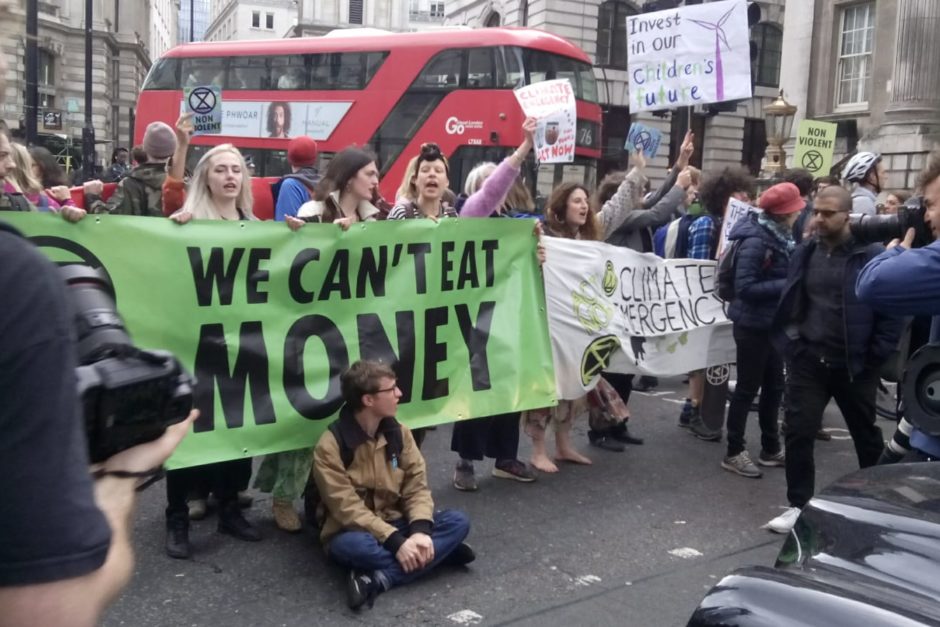 “Bankers are fathers and mothers, possibly grandparents as well as employees – I would encourage them to demand their employers stop financing companies that risk the safety of their children and grandchildren or they must consider themselves complicit,” Andrew Medhurst, who has worked for many of the largest companies in the UK financial sector, states.

The City of London has truly been brought to a standstill this morning with more than 300 Extinction Rebellion activists bringing traffic to a halt with swarming roadblocks throughout. Goldman Sachs on Fleet Street were lucky enough to receive a special visit, with people locking on in the middle of the road.

The world’s top banks have poured $1.9 trillion (£1.5 trillion) into fossil fuel financing since the Paris Agreement just over 3 years ago, with this financing on the rise each year. [1] Countless billions more fund projects which lead to rainforest destruction, industrial agriculture and other ecologically catastrophic projects.

As part of today’s swarming, there were a number of strategically located roadblocks in the City of London, the epicentre of this corporate greed at the expense of the living planet, with institutions affected by the swarming directly implicated:

Extinction Rebellion implores the financial industry to declare a climate and ecological emergency and be part of the solution for halting biodiversity loss and achieving net zero carbon by 2025. This is why we are highlighting the important role the financial industry must play if we are to face the future together.

The morning began as 13 Extinction Rebellion activists glued themselves to the London Stock Exchange wearing dystopian Robocop helmets with LED screens saying ‘Tell the truth’, a further 5 climbed on a Docklands Light Railway train – holding banners saying “Business as Usual = Death” to highlight the financial sector’s role in our collective suicide – and another glued themselves to the side.

Five people were willingly arrested for the DLR action at Canary Wharf, including Phil Kingston, who celebrates his 83rd birthday today. Police report a  further 26 people were arrested outside the London Stock Exchange building in the City of London, bring the total number of confirmed arrests in London, since the start of the Rebellion, to 1,138.

Dr Sandy Biden-Hoskins, 64, a doctor of archeology and one of the protesters blocking the back entrance to the London Stock Exchange said: “The most important reason I’m doing this is for my 8 and 11 year old grandsons, as I want them to have the same chance to enjoy the world I have, not to be burdened, and to know that I didn’t sit by and do nothing. I hope governments around the world and the corporate people who have the power to make the changes to protect our world, do so. I hope more people join Extinction Rebellion to make those people listen.”