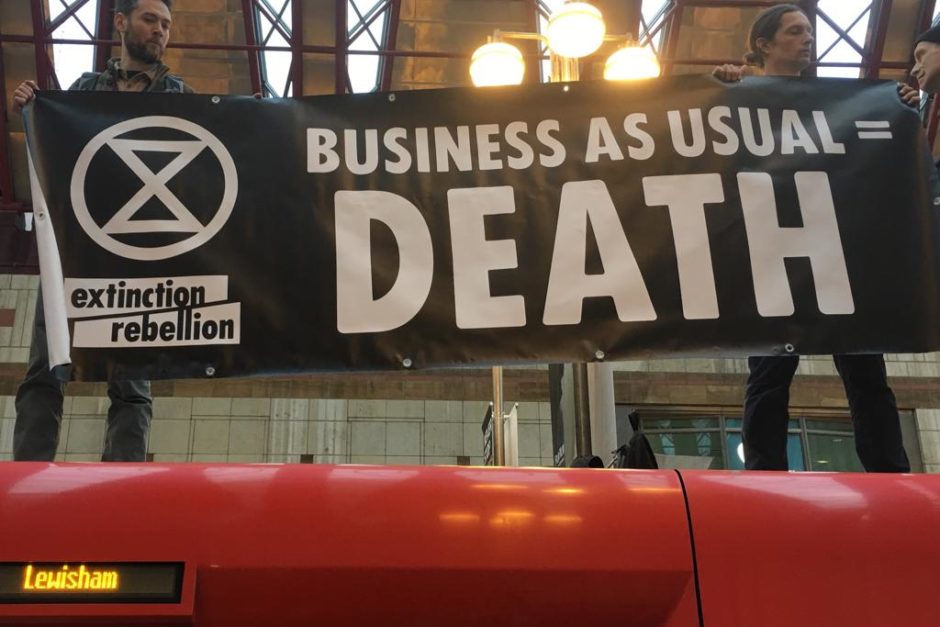 At 7.30am today, 5 people climbed on top of a train at Canary Wharf’s DLR station with banners  saying “Business as Usual = Death” referencing the financial sector’s role in our collective suicide, and others holding up a banner saying “Don’t Jail the Canaries”-  in solidarity with the three protesters currently on remand for last week’s DLR/Canary Wharf action. [1]

No arrests so far, police are present.

Extinction Rebellion demands that the financial industry and the government tells the truth about their roles in funding the climate and ecological crisis. The UK still has the biggest fossil fuel subsidies in the EU, despite government promises. [2]

The global financial industry is currently enabling climate and ecological destruction on an almost unimaginable level, and a considerable proportion of this money flows through London. “Business as usual”, especially through the toxic finance system, will kill all life on this planet.

Richard Barnard of Christian Climate Action – who is currently on top of a train, said: “We would really rather not be here but the ravaging of God’s creation calls us to do something, anything to stop this headlong rush into extinction on the back of the myth of financial progress and growth and business as usual.”

“Sadiq Khan summed up the State’s response to Extinction Rebellion’s clarion call to take proportionate, urgent action regarding the unfolding climate catastrophe by saying “Let London return to business as usual”.  Easter temperatures broke records and moorlands burnt in the North, but Khan’s message was clear: “Let us get on with destroying our future and perpetuating the flawed system that’s robbing our children of a stable future.”

“Empty rhetoric and sympathetic platitudes make it clear that despite a week of disruption, the political classes are not really listening. So further action must be taken in order to drive home the point that a dying planet is not business as usual.

In solidarity with Rebels who have been put on remand for pointing out our house is ablaze, in solidarity with the millions of lives, human and otherwise already being directly and adversely affected by climate breakdown we act again and will continue to do so. According to our consciences and the overwhelming evidence, both scientific and experiencial in order to highlight the truth of these times. That God’s beautiful creation is being destroyed.

“Our house is on fire, our children are screaming to put it out. Act now.

Savannah, 20, student said “Over the past week of civil disobedience to force government action on climate change, arrest has been normalised – imprisonment is the next step. The government deters people from taking on climate change using civil disobedience through legal repercussions, but I’ve reached a point where in order to align myself more entirely with my morality I’m no longer willing to let my actions be bound by unjust laws. After the last DLR action the state used its power to put people in prison on remand, and in response we have to escalate – not back down. “

Rupert Read said “When there was a major risk of the collapse of international finance systems in 2008, the finance sector urged governments to come together to save them because these finance systems and institutions were “too big to fail”.  However, when it now comes to the risk in the collapse of earth systems that literally hold all life together, there has been nowhere near the same sense of emergency from the finance sector urging governments to come together to act because “the earth is too big to fail”.   Our action is to highlight this hypocrisy and duplicity on the part of those running our financial institutions.”

BREAKING: Extinction Rebellion activists glued on Robocop style to London Stock Exchange – Time for MONEY to tell the truth on its impact on the Climate and Ecological Emergency

Today (Thursday), Extinction Rebellion will focus the financial industry and the corrosive impacts of the financial sector on the world we live in. First up the London Stock Exchange where protestors are glued on to the front and back entrances preventing people from entering.

The protestors are dressed in suits with Robocop style masks on their faces with the golden Extinction symbol painted on them. On their chests they have text on financial ticker style LED screens saying: ‘tell the truth’, ‘climate emergency’ and ‘you can’t eat money’.

Police are in attendance. No arrests as yet.

Many of the most environmentally destructive companies in the world have their stock market listings at the London Stock Exchange (LSE).  This institution literally trades in the devastation of our planet.

These include fossil fuel and highly destructive mining businesses as well as those who are creating ecological catastrophe, such as the cutting down of virgin rainforest for palm oil production.

A support worker at the London Stock Exchange, not giving his name for job security considerations, said: “I’ve been telling people this would happen for years. People said it would be fine and cars would get more efficient but that hasn’t happened on the scale needed.”

Extinction Rebellion is demanding the LSE tells the truth about the true impact of the companies they list.  Behind the computers that buy and sell company stocks are human beings. We wish to appeal to their humanity to recognise the existential threat that all species on our planet face and to stop trading in, and funding, the death of our ecosystem.

The LSE has tried to demonstrate environmental credentials by creating a ‘green’ index, FTSE4Good, of firms which are allegedly more environmentally friendly. However, they stand accused of greenwashing with this, for example due to their refusal to remove a palm oil firm from the index, even though their New York equivalent, the Dow Jones Index, has now done so.

Adam Woodhall, a business growth advisor states “I have been watching the slow car crash of ecological annihilation accelerate since I was teenager in the 1980s. I just read about the devastation of the rainforest when I was a kid, now I can feel the changes happen in real time. It is criminal people are allowed to make multiple millions, even billions, trading in the destroyers of our ecosystem.”

Soon after xx people brought the City and Canary Wharf to standstill by blocking roads around the x. Many of those who blocked the roads at Canary Wharf were young people.

Extinction Rebellion demands that the financial industry declares a climate and ecological emergency and be part of the solution for halting biodiversity loss and achieving net zero carbon by 2025.

The world’s top banks have poured £1.5 trillion into fossil fuel financing since the Paris Agreement just over 3 years ago, with this financing on the rise each year. There is countless billions more funding projects which lead to rainforest destruction, industrial agriculture and other ecologically catastrophic projects.

Mark Carney, the Governor of the Bank of England, sees this problem, writing a letter to the Guardian two days after the Rebellion started stating: “The enormous human and financial costs of climate change are having a devastating effect on our collective wellbeing,” going on to state, “If some companies and industries fail to adjust to this new world, they will fail to exist”.

He warned of a “climate driven Minsky moment”, referring to the work of the economist Hyman Minsky, whose analysis showed how banks overreached themselves before the 2008 financial crisis. Financial collapse and ecological collapse will go hand in hand.

Andrew Medhurst, who has worked for many of the largest companies in the UK financial sector states: “Bankers are fathers and mothers, possibly grandparents as well as employees – I would encourage them to demand their employers stop financing companies that risk the safety of their children and grandchildren or they must consider themselves complicit.”

A report published by the Sheffield Political Economy Research Institute at the University of Sheffield reveals the UK’s oversized financial sector has cost the economy £4.5 trillion in lost economic output between 1995 and 2015 – equivalent to £67,500 for every person in the UK. Also equivalent to 30 years of UK spending on health services.